Lake of the Woods

Lake of the Woods (French: lac des Bois) is a lake occupying parts of the Canadian provinces of Ontario and Manitoba and the U.S. state of Minnesota.[1] It separates a small land area of Minnesota from the rest of the United States. The Northwest Angle and the town of Angle Township can only be reached from the rest of Minnesota by crossing the lake or by traveling through Canada. The Northwest Angle is the northernmost part of the contiguous United States.

Lake of the Woods is fed by the Rainy River, Shoal Lake, Kakagi Lake, and other smaller rivers. The lake drains into the Winnipeg River and then into Lake Winnipeg. Ultimately, its outflow goes north through the Nelson River to Hudson Bay.

Lake of the Woods is over seventy miles long and wide, and contains more than 14,552 islands and 65,000 miles (105,000 km) of shoreline. It would amount to the longest coastline of any Canadian lake, except that the lake is not entirely within Canada. Lake of the Woods is also the 6th largest freshwater lake located (at least partially) in the United States- after the five Great Lakes.

The lake's islands provide nesting habitat for the piping plover and large numbers of American white pelicans. There are also several hundred nesting pairs of bald eagles in this area.

Following the IJC recommendations of 1917, discussions between the federal governments of Canada and the United States resulted in the 1925 Canada/USA Convention and Protocol regarding Lake of the Woods. This treaty established the water level operating range on Lake of the Woods, defined the purpose and general mode of operation, and provided for two boards to control regulation. The previously established Canadian LWCB was to regulate the lake on an on-going basis, but its decisions were to be subject to approval by an International Lake of the Woods Control Board (ILWCB) whenever lake levels rose above or fell below certain limits. In cases where agreement could not be reached between Canadian and American members of the international board, the disputed matter would be referred to the IJC for final decision. The International Lake of the Woods Control Board, however, is not a board created by the IJC. The board's members (one American and one Canadian) are appointed by the respective federal governments.

Communities near Lake of the Woods 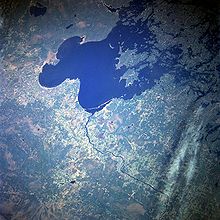 Lands within Lake of the Woods

The largest land feature in Lake of the Woods is the Aulneau Peninsula. It is connected to the mainland with a tiny neck of land at its southeast corner, but a canal (Turtle Portage) was cut through at this point, effectively making the Aulneau an island. The canal has now been filled back in. A manually run portage for small- to medium-sized boats is in its place. The Aulneau is approximately twenty miles long (32 km) and ten miles (16 km) wide. It contains within it over eighty lakes, the largest of which is Arrow Lake, with thirteen islands in it.

The Aulneau Peninsula was named after the Jesuit Father Jean-Pierre Aulneau, a French Catholic priest, who was killed by natives on 8 June 1736 on Lake of the Woods. The Catholic Church in Warroad, Minnesota, is named Father Aulneau Memorial Church in his honor.

Recreation on Lake of the Woods

Tourism is a large part of the local economy of Lake of the Woods, and there are many recreational opportunities available on the lake and in the surrounding countryside. Much of the lake is fairly remote, but resorts and equipment outfitters offer options for those who do not have access to their own boats and equipment.

Minnesota's Zippel Bay State Park offers a wide variety of services including campsites, toilet facilities, a marina with access to the Zippel River, and a beach. Minnesota and Ontario both offer state sanctioned parks and campsites, which can be located through the respective governments. Backcountry campers can locate a prospective campsite on Lake of the Woods by boat, landing and examining the site in person. There is abundant wildlife even on the small islands on the lake, so it is a good idea to take precautions against bear and biting insects as well.

Numerous marinas and resorts on the lake provide accommodation and dining, houseboat rentals, nautical charts, camping and fishing advice, and expert knowledge on how to most enjoy the lake.

The vast size and terrain of Lake of the Woods provides many fishing environments and opportunities. The lake is best known for its walleye population, but northern pike lake perch, smallmouth bass, largemouth bass, lake trout, lake sturgeon, and muskellunge can also be caught.

Lake of the woods is also home to the Royal Lake of the Woods Yacht Club.