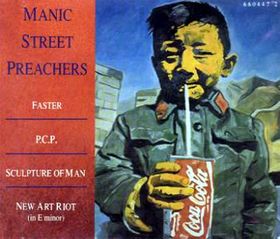 "Faster/P.C.P." is the lead single released by from their third studio album, "The Holy Bible".

The title "Faster" can both be interpreted as one who abstains from eating (a personal issue of lyricist ) or in regards to quick speed. The spoken word introduction ("I hate purity...") is taken from the film version of 's "1984". The lyric "if you stand up like a nail then you will be knocked down" is a Chinese proverb, referring to the probable results of differing from common consensus opinion or standards, as happened to "1984" protagonist .

"P.C.P." is thought to be a protest against politically correct censorship.Fact|date=October 2008 The title P.C.P. stands for police constable and Political Correctness (P.C.), in combination with conservative party (c.p.). Other meanings may include , the Welsh independence political party, especially regarding "bilingual signs on view". In addition, P.C.P. is also a drug - , otherwise known as - which causes its users to be delusional and agitated.The song is a constant barrage of confused orders, statements and bizarre scenarios to reflect this involving health risks, political situations and pseudo religions declarations such as "Be pure, be vigilant, behave" which is a quote from 2000 AD's .

Top of the Pops

The band performed "Faster" on with lead singer wearing an IRA-style balaclava with his first name scrawled over his forehead, with the rest of the band wearing military . Many viewers interpreted this as a show of support for the IRA and the told the band that a record number of complaints had been received.

, presenting the show, said of the song, "I really enjoyed that pop record. Did you Bob?".

[http://www.manics.nl] Site with interpretations of lyrics.