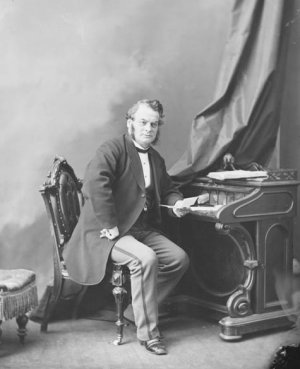 Sir Samuel Leonard Tilley, PC, KCMG (, &ndash; ,) was a Canadian politician and one of the Fathers of Confederation. Tilley was descended from on both sides of his family. As a , he went into business as a .

Born in , Tilley was the son of storekeeper Thomas Morgan Tilley and Susan Ann Peters. On , he married Julia Ann Hanford in ; they had eight children. Hanford died in 1862, leaving Tilley a . On , , he married Alice Starr Chipman in ; they had two children, including future New Brunswick premier .

Tilley entered politics as an activist in the . As a result of the 1848 recession, caused in part by Britain's economic policies, he became an advocate for . Tilley later joined the , which advocated for the colony's own control over its public expenses, the establishment of a system, government control of , and "honest government" in general.

First elected to the Assembly as a Liberal in 1850, he sat in opposition until the 1854 election swept the reformers to power. Tilley became in the government of .

He attended both the Charlottetown and Quebec City Conferences as a supporter of . He served as of the of New Brunswick from 1861 until his government was defeated in the election of 1865. As premier, he supported the New Brunswick's entry into Confederation and the construction of an intercolonial railway.

A common tale states that Tilley was the originator of the word "Dominion" in . The had been discussing what to prefix Canada with, Kingdom of Canada being Macdonald's preference. During morning devotions, Tilley read Psalm 72:8, which states "He shall have dominion also from sea to sea, and from the river unto the ends of the earth", and presented his inspiration to the others, being as their ambition was to stretch the new nation to the and from the to the . The legitimacy of this story has been questioned, however, as "dominion" had already been used in a colonial context to describe other British territories, for example the , and was thus hardly an innovative idea.

The term led to the naming of the July 1 national holiday; however, this reference to a unique Canadian historical development was discarded in 1980 when the name "", which had already been in use by some Canadians, was made official by an act of Parliament. In French, the date had long been known as "la fête nationale" (national feast or national birthday), a date which is often now applied to June 24 in Quebec, a date officially known as .

He is interred in the in .

* James Hannay, "The life and times of Sir Leonard Tilley, being a political history of New Brunswick for the past seventy years" (1897) Saint John, New Brunswick