Lily of the Valley

/ˌkɒnvəˈlɛəriə məˈdʒeɪlɨs/),[1] commonly known as the lily-of-the-valley, is a poisonous woodland flowering plant native throughout the cool temperate Northern Hemisphere in Asia and Europe.

It is possibly the only species in the genus Convallaria (or one of two or three, if C. keiskei and C. transcaucasica are recognised as separate species). In the APG III system, the genus is placed in the family Asparagaceae, subfamily Nolinoideae (formerly the family Ruscaceae[2]). It was formerly placed in its own family Convallariaceae, or earlier, like many lilioid monocots, in the lily family Liliaceae.

A limited native population occurs in Eastern USA (Convallaria majalis var. montana).[3] There is, however, some debate as to the native status of the American variety.[4]

C. majalis is a herbaceous perennial plant that forms extensive colonies by spreading underground stems called rhizomes. New upright shoots are formed at the ends of stolons in summer,[5] these upright dormant stems are often called pips.[6] These grow in the spring into new leafy shoots that still remain connected to the other shoots under ground, often forming extensive colonies. The stems grow to 15–30 cm tall, with one or two leaves 10–25 cm long, flowering stems have two leaves and a raceme of 5–15 flowers on the stem apex. The flowers are white tepals (rarely pink), bell-shaped, 5–10 mm diameter, and sweetly scented; flowering is in late spring, in mild winters in the Northern Hemisphere it is in early March. The fruit is a small orange-red berry 5–7 mm diameter that contains a few large whitish to brownish colored seeds that dry to a clear translucent round bead 1–3 mm wide. Plants are self-sterile, and colonies consisting of a single clone do not set seed.[7] 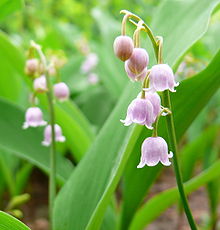 There are three varieties that have sometimes been separated out as distinct species or subspecies by some botanists.[8]

Convallaria transcaucasica is recognised as a distinct species by some authorities, while the species formerly called Convallaria japonica is now classified as Ophiopogon japonicus.[9] 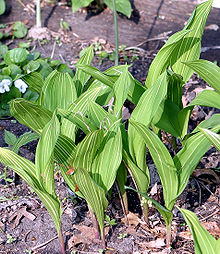 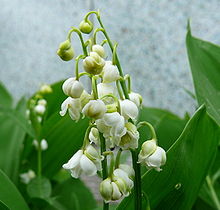 Convallaria majalis is a popular garden plant, grown for its scented flowers and for its ground-covering abilities in shady locations. Some consider it a weed, as it can spread over a wide area in gardens and can be difficult to contain or remove.

Various kinds and cultivars are grown, including those with double flowers, rose-colored flowers, variegated foliage and ones that grow larger than the typical species.[9]

Traditionally Convallaria majalis has been grown in pots and winter forced to provide flowers during the winter months, both for as potted plants and as cut flowers.[10]

All parts of the plant are poisonous and the red berries may be attractive to children; if eaten even in small amounts, the plant can cause abdominal pain, vomiting, and a reduced heart rate.[11]

Lily of the valley is used as a food plant by the larvae of some Lepidoptera species including the Grey Chi. 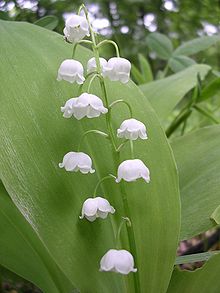 The flower is also known as Our Lady's tears, since, according to Christian legend, the lily of the valley came into being from Eve's tears after she was driven with Adam from the Garden of Eden,[12] although this seems unlikely, since in Catholic parlance, "Our Lady" refers to the Virgin Mary. Another Christian legend states that Mary's tears turned to lily of the valley when she cried at the crucifixion of Jesus, and because of this it is also known as Mary's tears. According to another legend, lilies of the valley also sprang from the blood of Saint Leonard of Noblac during his battles with a dragon.

The name "lily of the valley" is also used in some English translations of the Bible in Song of Songs 2:1, although whether or not the Hebrew word "shoshana" (usually denoting a rose) originally used there refers to this species is uncertain.

It is a symbol of humility in religious painting. Lily of the valley is considered the sign of Christ's second coming. The power of men to envision a better world was also attributed to the lily of the valley.

In Norse mythology lilies are associated with the virgin goddess of spring Ostara. The lily symbolizes life to Pagans and the blooming of lily of the valley flower heralds the feast of Ostara. The sweet fragrance and whiteness of the flowers symbolize the humility and purity of its patron goddess

Other names and legends

Other names include May lily, May bells, lily constancy, ladder-to-heaven, male lily, and muguet (French).

Its scientific name, majalis or maialis, means "of or belonging to May", and old astrological books place the plant under the dominion of Mercury, since Maia, the daughter of Atlas, was the mother of Mercury or Hermes.[citation needed]

In the "language of flowers", the lily of the valley signifies the return of happiness. Legend tells of the affection of a lily of the valley for a nightingale that did not come back to the woods until the flower bloomed in May.[citation needed]

Traditionally, lily of the valley is sold in the streets of France on May 1.

Lily of the valley was the floral emblem of Yugoslavia and it also became the national flower of Finland in 1967.

All parts, including the berries, of the lily of the valley are highly poisonous.[13][14] Roughly 38 different cardiac glycosides (cardenolides) have been found in the plant, some among others:

The plant also contains saponins. Although deadly, the plant has been used as a folk remedy in moderate amounts,[15] and is currently used by herbalists as a restricted herbal remedy. If the plant is touched or handled, hands should be washed before doing anything else.[citation needed]

Season 4 of the AMC television series Breaking Bad includes the poisonous effects of Lily of the Valley as a significant plot point during the final two episodes of the season. Lily of the Valley poisoning symptoms are described as flu-like and are compared to those from ricin poisoning.