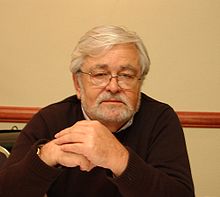 Dennis William Etchison (born March 30, 1943 in Stockton, California), is an American writer and editor of fantasy and horror fiction. Etchison refers to his own work as “rather dark, depressing, almost pathologically inward fiction about the individual in relation to the world.”Stephen King has called Dennis Etchison “one hell of a fiction writer” and he has been called "the most original living horror in America" (The Viking-Penguin Encyclopedia of Horror and the Supernatural). While he has achieved some acclaim as a novelist, it is his work in the short story format that is especially well regarded by critics and genre fans. He was President of Horror Writers Association from 1992 to 1994. He is a multi-award winner, having won the British Fantasy Award three times for fiction, and the World Fantasy Award for anthologies he edited.

An only child, the earliest years of his life were spent growing up in a household devoid of men (World War II was still raging across the globe). Etchison has remarked that he was greatly spoiled during his early years and largely isolated from other children. This sense of isolation and need to interact with society would later form the themes to many of his works.

In his early years, Etchison also became an avid wrestling fan. Fascinated by the interplay between good and evil, he would regularly attend shows at the Olympic Auditorium with his father. His passion for the sport continues to this day, and he often writes under the pen name “The Pro” for the wrestling publication Rampage.

In junior high and high school, Etchison wrote for the school paper and won numerous essay contests. He discovered Ray Bradbury during this time and emulated him before developing his own style. On the last day of his junior year in high school, Etchison began writing his first short story. Entitled “Odd Boy Out,” it involved a group of teenagers in the woods. He began submitting it to numerous science-fiction magazines but received rejection slips each time.

He then remembered Ray Bradbury once suggesting that a writer should start by submitting their work to the least likely market. So he submitted his short story to a gentlemen’s magazine called Escapade, and, a few weeks later, he received their acceptance and a check for $125. The young Etchison was becoming a professional writer.

Etchison has written professionally in many genres since 1960. He attended UCLA film school in the 1960s and has written many screenplays as yet unproduced, from his own works as well as those of Ray Bradbury ('The Fox and the Forest") and Stephen King "The Mist". He rewrote a Colin Wilson script, The Ogre and completed a screenplaty based on his own short story "The Late Shift". He co-wrote a TV story for the Logan's Run series - "The Thunder Gods" (printed in The Circuit" 2, No 3).

In 1983, Etchison was asked by Stephen King to be the film consultant /historian on King's book on the horror genre, Danse Macabre (book).

In 1984, ZBS Media produced a 90-minute radio version of Stephen King's "The Mist" based on Etchison's script. A film. "Killing Time", was made by Patrick Aumont and Damian Harris (Graymatter Productions) from Etchison's story 'The Late Shift".

In 1985 Etchison served as staff writer for the TV series The Hitchhiker (TV series) (HBO).

His first short story collection, The Dark Country, was published in 1982. Its title story received the World Fantasy Award[1] (tied with Stephen King as well as the British Fantasy Award[2] for Best Collection of that year - the first time one writer received both major awards for a single work.

Etchison nearly had his first short story collection appear eleven years earlier. In 1971 he sold Powell Books, a low-budget Los Angeles based publisher who published Karl Edward Wagner's Darkness Weaves, a collection of his science fiction and fantasy under the title The Night of the Eye. The book went into galley proofs and beyond - Etchison received a cover proof, and an ISBN (0-8427-1014-0) was assigned. On the eve of the book's publication, Powell Publications went bankrupt. Etchison would wait over a decade before his actual first collection The Dark Country would appear, to critical acclaim.

Several more collections have been published since then, including a career retrospective, Talking in the Dark (2001), which consisted of stories personally selected by the author. He was nominated for the British Fantasy Award for "The Late Shift" (1981), and as well as winning the ward in 1982 for "The Dark Country", has won it since for Best Short Story, for "The Olympic Runner" (1986) and "The Dog Park" (1994).[2]

Etchison has periodically taught classes in creative writing at UCLA.

As editor, Etchison has received two World Fantasy Awards for Best Anthology, for Metahorror (1993) and The Museum of Horrors (2002). His other anthologies include the critically acclaimed Cutting Edge (1986), Gathering The Bones (2003) (edited with Ramsey Campbell and Jack Dann), and the Masters of Darkness series (three volumes).

Etchison is generally regarded as one of the finest writers currently working in the horror genre, especially by his peers. The late Karl Edward Wagner proclaimed him "the finest writer of psychological horror this genre has ever produced."[3] Charles L. Grant called Etchison "the best short story writer in the field today, bar none."[4] Publishers Weekly has hailed his work as “the state of the art in modern horror.” Considered by many to be the finest horror writer alive today, while Etchison has not enjoyed the mainstream success of a Stephen King or Peter Straub, he keeps producing high-quality horror which continues to delight both the critics and his dedicated fanbase.