An artist's rendering of wave shoaling of a tsunami.

Megatsunami (also known as iminami (斎波?, "purification wave")) [1] is an informal term to describe a tsunami that has initial wave heights that are much larger than normal tsunamis. Unlike usual tsunamis, which originate from tectonic activity and the raising or lowering of the sea floor, known megatsunamis have originated from large scale landslides or impact events.

A megatsunami is meant to refer to a tsunami with an initial wave amplitude (height) measured in several tens, hundreds, or possibly thousands of meters.

Normal tsunamis generated at sea result from movement of the sea floor. They have a small wave height offshore, and a very long wavelength (often hundreds of kilometers long), and generally pass unnoticed at sea, forming only a slight swell usually of the order of 30 cm (12 in) above the normal sea surface. When they reach land the wave height increases dramatically as the base of the wave pushes the water column above it upwards.

By contrast, megatsunamis are caused by giant landslides and other impact events. Underwater earthquakes or volcanic eruptions do not normally generate such large tsunamis, but landslides next to bodies of water resulting from earthquakes can, since they cause a massive amount of displacement. If the landslide or impact occurs in a limited body of water, as happened at the Vajont Dam (1963) and Lituya Bay (1958) then the water may be unable to disperse and one or more exceedingly large waves may result.

Two heights are sometimes quoted for megatsunamis - the height of the wave itself (in water), and the height to which it washes when it reaches land, which depending upon the locale, can be several times larger.

History of the hypothesis

Geologists searching for oil in Alaska in 1953 observed that in Lituya Bay, mature tree growth did not extend to the shoreline as it did in many other bays in the region. Rather, there was a band of younger trees closer to the shore. Forestry workers, glaciologists, and geographers call the boundary between these bands a trim line. Trees just above the trim line showed severe scarring on their seaward side, whilst those from below the trim line did not. The scientists hypothesized that there had been an unusually large wave or waves in the deep inlet. Because this is a recently deglaciated fjord with steep slopes and crossed by a major fault, one possibility was a landslide-generated tsunami.[2]

On 9 July 1958, an earthquake of magnitude 7.7 (on the Richter scale), caused 90 million tonnes of rock and ice to drop into the deep water at the head of Lituya Bay. The block fell almost vertically and hit the water with sufficient force to create a wave approximately 524 meters (1,719 ft) high. Howard Ulrich and his son, Howard Jr., were in the bay in their fishing boat when they saw the wave. They both survived and reported that the wave carried their boat "over the trees" on one of the initial waves which washed them back into the bay, though the larger wave did not harm them much. A similar tsunami out at sea could come tens of kilometers inland.

This event and evidence of a potentially similar past event at the same location inspired the term megatsunami.[citation needed]

In 1792, Mount Unzen in Japan erupted (島原大変肥後迷惑), causing part of the volcano to collapse into the sea. The landslide caused a megatsunami that reached 100 meters (330 ft) high and killed 15,000 people in the local fishing villages.[citation needed] 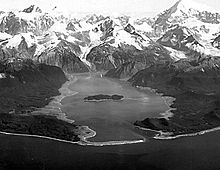 Damage from the 1958 Lituya Bay megatsunami can be seen in this oblique aerial photograph of Lituya Bay, Alaska as the lighter areas at the shore where trees have been stripped away.

On 9 July 1958, a giant landslide at the head of Lituya Bay in Alaska, caused by an earthquake, generated a wave with an initial amplitude of 524 meters (1,719 ft). This is the highest wave ever recorded, and surged over the headland opposite, stripping trees and soil down to bedrock, and surged along the fjord which forms Lituya Bay, destroying a fishing boat anchored there and killing two people. Howard Ulrich and his son managed to ride the wave in their boat, and both survived.[9]

On 9 October 1963, a landslide above Vajont Dam in Italy produced a 250 m (820 ft) surge that overtopped the dam and destroyed the villages of Longarone, Pirago, Rivalta, Villanova and Faè, killing nearly 2,000 people.[10][citation needed]

One lobe of the avalanche surged onto Spirit Lake, causing a megatsunami which pushed the lake waters in a series of surges, which reached a maximum height of 260 meters (853 feet)[11] above the pre-eruption water level (~975 m asl/3,199 ft). Above the upper limit of the tsunami, trees lie where they were knocked down by the pyroclastic surge; below the limit, the fallen trees and the surge deposits were removed by the megatsunami and deposited in Spirit Lake.[12]

Experts interviewed by the BBC think that a massive landslide on a volcanic ocean island is the most likely future cause of a megatsunami.[13] The size and power of a wave generated by such means could produce devastating effects, travelling across oceans and inundating up to 25 kilometres (16 mi) inland from the coast.

Some geologists consider an unstable rock face at Mount Breakenridge, above the north end of the giant fresh-water fjord of Harrison Lake in the Fraser Valley of southwestern British Columbia, Canada, to be unstable enough to collapse into the lake, generating a megatsunami that might destroy the town of Harrison Hot Springs (located at its south end).[14]

Geologists S. Day and S. Ward consider that a megatsunami could be generated during a future eruption involving the Cumbre Vieja on the volcanic ocean island of La Palma, in the Canary Islands, Spain.[15][16]

In 1949, the Cumbre Vieja volcano erupted at its Duraznero, Hoyo Negro and San Juan vents. During this eruption, an earthquake with an epicentre near the village of Jedy occurred. The following day Rubio Bonelli, a local geologist, visited the summit area and discovered that a fissure about 2.5 kilometers (1.6 mi) long had opened on the eastern side of the summit. As a result, the western half of the Cumbre Vieja (which is the volcanically active arm of a triple-armed rift) had slipped about 2 meters (6.6 ft) downwards and 1 meter (3.3 ft) westwards towards the Atlantic Ocean[citation needed].

The Cumbre Vieja volcano is currently in a dormant stage, but will almost certainly erupt again in the future. Day and Ward hypothesize[15][16] that if such an eruption causes the western flank to fail, a megatsunami will be generated.

La Palma is currently the most volcanically active island in the Canary Islands Archipelago. It is likely that several eruptions would be required before failure would occur on Cumbre Vieja.[15][16] However, the western half of the volcano has an approximate volume of 500 cubic kilometres (120 cu mi) and an estimated mass of 1,500,000,000,000 metric tons (1.7×1012 short tons) If it were to catastrophically slide into the ocean, it could generate a wave with an initial height of about 1,000 metres (3,300 ft) at the island, and a likely height of around 50 metres (164 ft) at the Caribbean and the Eastern North American seaboard when it runs ashore eight or more hours later. Tens of millions of lives would be lost as New York, Boston, Baltimore, Washington, D.C., Miami, Havana, and many other cities near the Atlantic coast are leveled. The likelihood of this happening is a matter of vigorous debate.[17]

The last Cumbre Vieja eruption occurred in 1971 at the southern end of the sub-aerial section without any movement. The section affected by the 1949 eruption is currently stationary and does not appear to have moved since the initial rupture.[18]

Geologists and volcanologists also disagree about whether an eruption on the Cumbre Vieja would cause a single large gravitational landslide or a series of smaller landslides.

Prehistoric sedimentary deposits on the Kohala Volcano, Lanai and Molokai controversially indicates that landslides from the flank of the Kilauea and Mauna Loa volcanoes in Hawaii may have triggered past megatsunamis, most recently at 120,000 BP.[19][20][21] A future tsunami event is also possible, with the tsunami potentially reaching up to about 1 kilometre (3,300 ft) in height.[22][23] According to a documentary called National Geographic's Ultimate Disaster: Tsunami, if a big landslide occurred at Mauna Loa, a 30 meters (98 ft) tsunami would take only thirty minutes to reach Honolulu, Hawaii. There, hundreds of thousands of people would be killed as the tsunami leveled Honolulu and traveled 25 kilometers (16 mi) inland.