Dušan's Code (Serbian: Душанов законик, Dušanov zakonik, known historically as Закон благовјернаго цара Стефана)[1] was enacted by Tsar Dušan in two state congresses: in May 21, 1349 in Skopje and amended in 1354 in Serres. It regulated all social spheres, so it can be considered a medieval Serbian constitution. The Code included 201 articles. The original manuscript is not preserved, but around twenty copies of the transcript, from the 14th to 18th century, remain. The Code was based on Roman-Byzantine law. The legal transplanting is notable with the articles 171 and 172 of Dušan's Code, which regulated juridical independence. They were taken from the Byzantine code Basilika (book VII, 1, 16-17). The Code had its roots in the first Serbian constitution — St. Sava's Nomocanon (Serbian: Zakonopravilo)[2][3][4] from 1219, enacted by Saint Sava. This legal act was well developed. St. Sava's Nomocanon was the compilation of Civil law, based on Roman Law[5][6] and Canon law, based on Ecumenical Councils. Its basic purpose was to organize the functions of the young Serbian kingdom and the Serbian church. The Serbian Empire flourished, becoming one of the most developed countries and cultures in Europe. 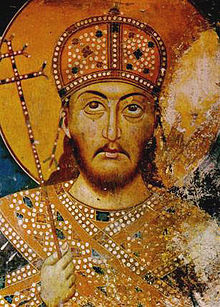 Further commandeth our Imperial Majesty:
Should our Imperial Majesty write a letter
Out of wrath, or out of love
Or out of mercy for any one,
And should such a letter contravene the Code
And be at variance with the law and justice
As set down in the Code,
The judges
Shall not comply therewith
But shall judge
And act withal as justice commandenth.

Any poor woman unable to litigate
Or defend herself shall choose an attorney
Who shall speak on her behalf.
The poorest hemp-spinstress shall be as free as a priest shall.