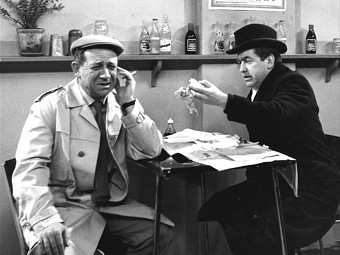 The show was written by Ray Galton and Alan Simpson, and produced by , although, after Main-Wilson departed for his television career, this role was later taken by . The distinctive tuba-based theme tune was composed by Wally Stott.

Comedian Tony Hancock starred in the show, playing an exaggerated version of his own character, as a down-at-heel comedian living at the dilapidated 23 Railway Cuttings in East Cheam. The comedy actor Sid James played a criminally-inclined confidante of Hancock, who usually succeeded in conning him each week, and Bill Kerr appeared as Hancock's Australian lodger, a character who became noticeably dim-witted in the later shows. A young Kenneth Williams, taking his first job in comedy, provided the funny voices for all the minor characters in the show each week. appeared in the first series, before being replaced by for the next two; both women played love interest for Hancock's character, but both were playing essentially straight roles. In the fourth and fifth series a comedienne, Hattie Jacques, provided comedy in the female role as the harridan Grizelda Pugh, who was Hancock's secretary and Sid's occasional girlfriend.

The series broke with the variety tradition which was then dominant in British , highlighting a new genre: the sitcom or . Instead of the traditional variety mix of sketches, guest stars and musical interludes, the show's humour derived from characters and situations developed in a half-hour storyline. This relatively novel format, of what was in effect a single sketch each week lasting the entire half-hour (and featuring the same characters each week), was reflected in the show's title which aptly described the series as Hancock's "half-hour". Roger Wilmut, who authored a biography of Tony Hancock as a performer, credits two earlier British radio comedy shows with establishing an uninterrupted 30 minute sitcom format: written by Godfrey Harrison and a programme heavily based on the US tradition of sitcoms; he therefore dismisses the notion that Galton and Simpson invented the genre.

The comedy was based on reality and observation. The playlet "Look Back In Hunger" (spoofing John Osborne's "Look Back in Anger") in the episode "The East Cheam Drama Festival", showed that writers Galton and Simpson were in touch with developments in the British theatre, in the use of sighs and silent pauses (something Osborne's style had in common with the plays of ), which emerged towards the end of the series' run. And the measured pacing of the episodes was groundbreaking in an era of fast-talking radio comedians such as Ted Ray, who typically used a machine-gun style of delivery to fill every single second of airtime.

With Galton and Simpson writing scripts prolifically, continuity was not a priority, and details changed to suit each episode. The domestic situation therefore varied, but Hancock usually portrayed an unemployed or hopeless down-at-heel comedian, Sid was always on-the-fiddle in some way, Bill gradually became dim and virtually unemployable (although he had started out as a fast-talking American-style Australian), and Hancock's 'secretary' Miss Pugh had such a loose job description that in some episodes she cooked the Sunday lunch. At times the scripts would reflect topical realities of British life, such as rationing and a specific railway strike. With the notable exception of many years later, television sitcoms can rarely achieve such topical references.

Hancock's character had various addresses, but by the third radio series he had arrived at 23 Railway Cuttings, East Cheam. Sometimes this was portrayed as a council house, but sometimes there was a private landlord. In a few early episodes Hancock had owned the house, and later this became the norm. The house changed to accommodate the cast: in some episodes it appeared to be a two-bedroom terraced house, with Bill as Hancock's lodger; but in series four and five it had at least three bedrooms, as Miss Pugh was also resident in some episodes. In others she 'came round' each day, presumably from her own domicile. Railway Cuttings and East Cheam were fictitious, but Cheam is a real town in Surrey, located to the west of Sutton. The whole area is smart and expensive, and by creating 'Railway Cuttings, East Cheam' Galton and Simpson created an address for a snob who wanted to live in a 'posh' area, but could only afford the 'cheap end' (which in reality does not exist). In those days recordings of the radio shows were not commercially available, so the audience had to rely entirely on memory for details of who lived where or who did what in the show.

Episodes of the radio series were included in 20 underground radio stations of the BBC's Wartime Broadcasting Service (WTBS), designed to provide information and morale-boosting broadcasts for 100 days after a nuclear attack [cite news |last=Hellen|first=Nicholas |title=Julie Andrews to sing to Brits during nuclear attack |publisher=Sunday Times |date=1999-07-11] .

The version appeared in 1956 under the same name and with the same writers, produced for the BBC by . The television and radio versions alternated until 1959, when the final radio series and the fifth television series were both broadcast during the autumn season. Only Sid James transferred from the radio series, although Kenneth Williams and Hattie Jacques each made a couple of appearances. The television version drew on a stock company of actors, who played different supporting characters in each episode. Semi-regulars included , , and .

The final television series, broadcast in 1961, was retitled "Hancock", as it was shortened from a half-hour to 25 minutes. For this final series Sid James was dropped from the cast, as Hancock feared they were coming to be seen as a double-act. Some of the most celebrated episodes of the TV series were produced in this final series, including "", "The Radio Ham", and "The Bedsitter".

Some episodes of the radio series were wiped, and telerecordings of some episodes from the third and fourth television series were destroyed. No episodes survive from the first season of the TV series. The surviving radio episodes, which sometimes exist only in edited versions that have been cut for overseas sale to commercial radio stations, were released as CD box sets between 2000 and 2003 (see below).

In a list of the drawn up by the in 2000, voted for by industry professionals, "Hancock's Half Hour" was placed 24th. In 1962, the show became the first imported programme to win a following its transmission on Telefís Éireann, the 's national TV station. ["The Irish Times", "BBC wins award for Hancock series in first T.E. critic's selection", December 5, 1962]

In 1956 and 1957 Hancock starred in two series of a sketch show made by for ITV television, which were broadcast either side of his first television series on the BBC.

In 1972 a Norwegian tv-show called "Fleksnes Fataliteter" aired for the first time. It was based on scripts from Hancock's Half Hour. The show became trilingual, as it usually starred both Swedish and Danish actors, and was aired in Sweden and Denmark as well as in Norway. [http://en.wikipedia.org/wiki/Fleksnes]

Most of the radio episodes were recorded between one day and three weeks in advance of broadcast, except for Series 6 which was mostly recorded during a three-week period in June 1959 in order to avoid clashing with the recording of Series 5 of the television show.

All the regular cast played "themselves" (that's to say, the characters were called by the actor's real name), except Kenneth Williams (who played a series of unnamed characters referred to in the scripts -- but not on air -- as "Snide", as well as various other characters), Alan Simpson (who played an unnamed man who listened patiently to Hancock's long-winded stories), and Hattie Jacques (who played Griselda Pugh, Hancock's secretary).

Two episodes of the radio series &mdash; "The Blackboard Jungle" (series 3) and "The New Secretary" (series 4) &mdash; were recovered in 2002 from off-air home recordings made by a listener.

The loss of Episodes 5 and 15 is particularly unfortunate since they feature the only "Hancock" guest appearances by and respectively.

Coincidentally, three of Hancock's co-stars in the first series were born in .

Shortly before the series was due to be recorded Hancock walked out on a theatre performance suffering from "nervous exhaustion" and flew to Rome. was brought in at short notice to replace Hancock and starred in the first three episodes, and made a guest appearance in the fourth. Hancock himself returned for the fourth episode and completed the series as scheduled.

These episodes are remakes for overseas sales, rewritten to remove any topical or UK-specific references.

The entire series exists on telerecordings.

The entire series exists on telerecordings.

The television series of Hancock's Half Hour was first released on VHS in 1984 under BBC Enterprises (now Worldwide). 6 Videos were released each containing 3 episodes. The next video was not to be for another 9 years, and that was a compilation. Another 3 years later and a video was released containing the first 3 remaining episodes. Two later videos were released in 1997 and one video with "The Train Journey" was released in 1999.

The first DVD to be released was in 2001, which was just a re-release of "The Best Of" video, which was Series 7 without the final episode. The next DVD was to be released in 2004, containing the first 5 remaining episodes and the very rare special "Hancock's Forty-Three Minutes". Three more DVDs were released within 2 years, but still the final episode "The Succession - Son And Heir" was missing from DVD. But thanks to a boxset was released in 2007 called "The Tony Hancock Collection" containing every episode, new extras, and a remaster to most episodes.