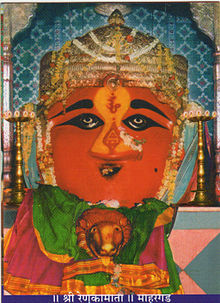 Idol of Renuka goddess in Mahur.

Please see Mahur for other uses.

Mahur or Mahurgad is a religious place in Maharashtra, India. Mahur is said to be the birth place of Hindu Goddess Renuka, mother of Lord Parshuram. The three and half Shakti Peethas of Maharashtra are Tuljapur enshrining Bhavani, Kolhapur enshrining Mahalakshmi, Mahur enshrining Mahamaya, and Renuka and Saptshringi enshrining Jagadamba. Other Shakti temples in the state are those at Ambe Jogai and Aundh.

There are many temples in Mahur like Anusaya Temple, Kalika Temple. The most important one is the temple of Renuka Devi, which has a special place in the Hindu mythology. A big fair is held here every year on the occasion of Vijayadashami.

Mahur is also said to be birth place of God Dattatreya. Dattatreya was born to Goddess Anusaya. There is an ancient temple of Dattatreya. Every Year on Datta Pornima Thousands of people visit Mahur.

Mahur finds mention in the ancient, Devi Bhagawatam as Matripura, where it is mention as one of the famous pilgrimages,[1] further in Devi Gita which the final and most important chapter of the text, it is mentioned as one the important places of Shakti worship, "Devi spoke:...I am now telling something out of My affection to My Bhaktas...Matripura in the Sahyadri mountain; here the Devi Renuka dwells..."...[2] And in respect of Muslims It is famous for the Dargah of Baba SonaPir, who is also konwn as Mohar-e-Rasool (Stamp of Prophet). In every 5th of the month a Urs has been conducted in Dargaah. Many people comes from different parts of country to celebrate this occasion.

Mahur is situated on the Sahyadri Ranges, also known as the Western Ghats. All three important temples "Renuka Temple", "Dattatreya Temple" and "Anusaya Temple" are built on three mountain ranges. Mahur is surrounded by jungles rich with trees and wild life. You can see the teakwood trees everywhere. Peacocks, deer, black bears, panthers are very common in the jungle.

On one of the mountains is the ancient "Mahurgad Fort" constructed in the 12th century. Mahur was one of important fort in ancient Berar history. Even it becomes separate province in 1478 during Bahmani Sultanate. It was a one of the Sarkar (then district) with 20 parganas (towns) in Berar Subah(state) in Akbar's rule.

People who visit Mahur Also Visit "Unkeshwar" (50 km from Mahur; 15 km from Kinwat), which has natural sources of hot water. This sulphur rich water is supposed to have medicinal value.

How to go to Mahur?

You can go to Mahur by Maharashtra state transport buses from Nanded, Kinwat or Pusad.If you want to travel from Mumbai to Mahur by train then take Nandigram Express from Mumbai to Kinwat and then state bus from Kinwat to Mahur.You can also travel by Devgiri Express and Tapovan Express till Nanded, then take state transport bus from Nanded to Mahur.You can also travel by air to Nanded from Mumbai. There is daily air service from Mumbai to Nanded by Kingfisher Airlines and Go Air. One can also plan to visit Mahur from Nagpur which is very well connected to most parts of India by Rail and Air. Once you reach Nagpur, you can take a bus or taxi to Mahur. The road from Nagpur to Mahur via Wardha, Yavatmal and Mahagaon is beautiful. Devotees also walk from Nanded - Takes a day or two to reach Mahur via Dhanoda.