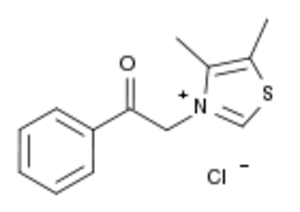 Alagebrium (formerly known as ALT-711) is a drug produced by [http://www.alteon.com Alteon Corporation] , which is currently being evaluated in clinical trials. It is the first drug to be clinically tested for the purpose of breaking the crosslinks caused by s (A.G.E.s), thereby reversing one of the main mechanisms of aging.

A.G.E.s are permanent carbohydrate structures that form when carbohydrates bind to proteins, lipids and DNA. Many proteins, including structural proteins such as collagen and elastin, play an integral role in the architecture of tissues and organs and maintenance of cardiovascular elasticity and vascular wall integrity. Diabetic individuals form excessive amounts of A.G.E.s earlier in life than non-diabetic individuals. This process can impair the normal function of organs that depend on flexibility for normal function, such as blood vessels and cardiac muscle. The formation of A.G.E. crosslinks leads to increased stiffness and loss of function of tissues and organs, and abnormal protein accumulation, which together cause many of the complications of aging and diabetes. A.G.E.s are also known to induce oxidative stress, in which reactive molecules provoke the underlying component of inflammation.

Pharmacologic intervention with alagebrium directly targets the biochemical pathway leading to the stiffness of the cardiovascular system. Removal of the A.G.E.s by cleavage of the abnormal crosslinking bonds has been associated with diminished inflammatory and sclerotic signaling pathways. These pathways are responsible for the deposition of abnormal amounts of matrix proteins that physically stiffen tissues. The presence of A.G.E. crosslinks also renders tissues and organs less susceptible to normal turnover thus enhancing the presence of these abnormal bonds on various molecules. Importantly, alagebrium does not disrupt the natural carbohydrate modification to proteins, intra-molecular crosslinking or peptide bonds that are responsible for maintaining the normal integrity of the collagen chain. Thus, normal structure and function is preserved while abnormal crosslinking is reduced.

The chemical compound had been discovered many years ago, and had traveled a circuitous route through academia, research firms, and finally, Alteon. There are two prominent attributes to Alagebrium (as Alteon renamed it). The first is that it is not a difficult compound to synthesize. An active black market rose very quickly after the early Phase I and II tests came in. Independent, lab-tested, certified for purity product was available for a short time on the grey market at about $3 per gram.

Although Alagebrium has shown very promising Phase I and II s, active research stopped because Alteon had run out of operating cash. [" [http://www.fightaging.org/archives/000981.php Alteon, Alagebrium, ALT-711] ", "Fight Aging", 20 April 2007] Alteon, having a huge amount of convertible preferred stock hanging over its head (held by Genentech), had increasing difficulty raising subsequent levels of venture capital until finally, it was unavailable at any price. On 25 July, 2007 Alteon was essentially bought for its corporate shell by a three-man operation developing another medication that needed a corporate shell in order to move fast. The company changed its name to Synvista Therapeutics, Inc. now with perhaps three employees here in the U.S., and outsources its research, (probably none of it on Alagebrium, despite the website's assertions).

One conclusion that could easily be derived from the published research is that Alagebrium works first and fastest on those areas with the most blood-to-surface coverage and that are constantly in a state of higher levels of hemodynamic pressure, such as the large and small chambers of the heart, as well as the atriums, and potentially, the valves. Because testing for regulatory approval looks for quick answers for severe problems in order to meet the 'need' hurdles of the FDA, and given the impatience of the venture capital markets, Alteon never engaged in long-term tests seeking FDA approval of the medication for conditions than heart treatment, so the patent applied for was a 'use' patent for just that. Given the relationship between surface-area coverage under pressure and short-terms results, testing for conditions such as diabetic neuropathy, or long-term low-dose prohylactic use for aging hearts, which would have taken years, was never an option for Alteon. Although the medication had dramatic positive results in the tests for efficacy, the molecule is not difficult to replicate, which is a negative vis-a-vis obtaining approval and satisfying investors that they are buying into an exclusively-owned product. So a lack of patent protection, and ease of replication by others, obviously made the venture investment community lose faith before an approved product arrived.