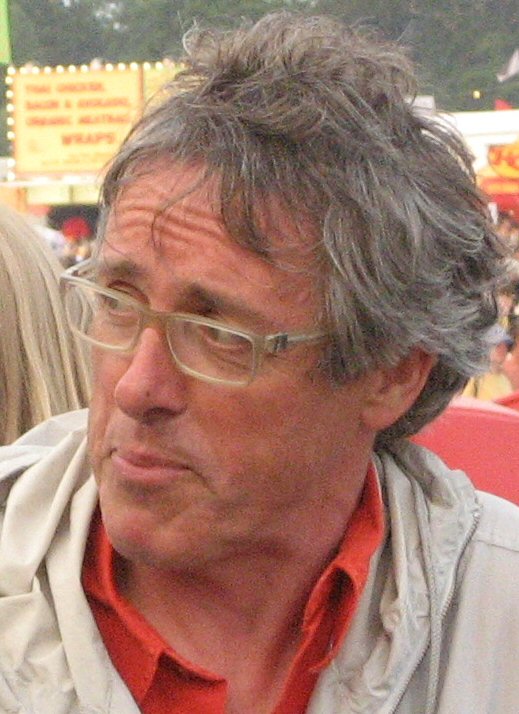 Griffith Rhys Jones (born or (depending on source: speakers agent (6th) or BBC (16th)) in , , ), better known as Griff Rhys Jones, a Welsh , and . He came to national attention in the 1980s when he starred with in a number of comedy sketch programmes on British television.

Rhys Jones was born in , the son of a doctor. Moving with his father's work, he attended primary school in , , junior school in , Essex and Brentwood School, Essex. [ [http://www.headliners.org/storylibrary/stories/1996/talkbackgriffrhysjones.htm The actor and director thinks back to his school days] , Headliners, 1996. Retrieved .] While the family was resident in Essex, his father had a boat in , which they would sail around the coast of and into . [ [http://www.thisistravel.co.uk/travel/ukholidays/Suffolk-Estuary-English-article.html?in_article_id=18595 Suffolk: Estuary English] , Mail on Sunday, 2001. Retrieved .]

While at Brentwood School he met (later Executive Director of the ) and (who would later write ""). In 1967 he appeared in "" as the First Witch, alongside Douglas Adams who played Young Siward and "A Sargeant". The producer, Wiliam Barron, remarked in the programme concerning the roles of the witches: "To deprive young boy actors of any opportunity of expressing devilish glee would be to take away half the fun of playing such parts: yet it is agreed that they must not be allowed to "'hee-hee, ho-ho' at each new tempation and crime." ["Brentwood School Winter Theatricals Programme", 1967] . He was part of a group whose antics led to them being referred to as "The Clique" by the school's headmaster. After a short spell working as a petrol-pump attendant, he gained a gap-year job on the ship "Uganda", working for a company organising school trips. In his autobiography, "Semi-Detached" (see below), he describes how he was charged with helping to look after 600 schoolgirls, followed by a similar number of younger Scottish schoolchildren, and refers to the experience as being like " at sea". ["Semi-Detached", Griff Rhys Jones' autobiography, Penguin, 2006] He wrote to eight of the Canadians afterwards, and lost his virginity to one of them.

Rhys Jones followed Bean and Adams to Cambridge, reading and English at Emmanuel College. While at university, Jones joined the prestigious Cambridge Club (of which he became Vice-President in 1976). He was also president of the ADC (Amateur Dramatic Club) during his time at Cambridge. At this time, his ambitions were focused on the theatre, particularly directing.

After university, he worked briefly as a to visitors to London.

He then joined Light Entertainment as a trainee producer, with his output including the satirical show "" and "." [ [http://www.screenonline.org.uk/people/id/526218/index.html Bio at Screen Online] ] An evening planned to spend watching his hero at the invitation of friends and who were writing the show at the time, resulted in Griff replacing the show's producer who had suffered from a stress related illness from dealing with the comedian. He later produced 's show "Atkinson's People" for the .

Rhys Jones has appeared twice on . His most memorable moment was during his second appearance. During the game "Film and Theater Styles", Rhys Jones stuffed ' sock in his mouth moments before the game ended. He almost could not get the sock out again. His most spectacular role by far was as the narrator/moon in Funnybones, the award winning children's TV show. He also played small skeleton.

Rhys Jones filled in several minor roles in the first series of "", and was brought in as a regular cast member from the second series onwards, replacing . Rhys Jones says that the reason he got the part was not due to his appearance in the initial shows, or his talent, but because producer John Lloyd was going out with his sister at the time. Rhys Jones became a regular from the commissioned second series, alongside Atkinson, and .

After "Not the Nine O'Clock News", Smith and Rhys Jones thought they would be unemployed. They decided to take action in two areas: firstly by creating and writing more material together, and secondly by starting a management company to produce their own programmes as well as those of other performers.

In 1981, Smith and Rhys Jones founded , a company which has produced many of the most significant British comedy series of the past two decades, including "", "", "" and "". From 1984, Smith and Rhys Jones appeared in the comedy sketch series "" (the show's title being a pun on the American TV series ""). After the first series of "Alas Smith and Jones", the pair appeared on the big screen in ' sci-fi comedy movie "", and then in 1989 the production "Wilt". They also developed TalkBack to manage other acts, they sold the company to for £62 million.

Smith and Jones were reunited in 2005 for a review/revival of their previous television series in "The Alas Smith and Jones Sketchbook". The BBC was criticised for using it to repeat a series of programmes without resorting to unpopular repeats.Fact|date=February 2007 Smith joked: "Obviously, Griff's got more money than me so he came to work in a Rolls-Royce and I came on a bicycle. But it was great fun to do and we are firmly committed to doing something new together, because you don't chuck that sort of chemistry away. Of course, I'll have to pretend I like "Restoration"." [ [http://www.metro.co.uk/metrolife/edinburgh/interview/article.html?in_article_id=18177&in_page_id=33 Interview with Mel Smith] , Metro.co.uk. Retrieved .]

Rhys Jones has developed a career as a television presenter, beginning as the co-host on several Comic Relief programmes. He presented "" from 1994 to 2000, and is the presenter of the 's "Restoration" programme (he began filming its third series at on ), and has done a considerable amount of fundraising work for the theatre conservation project. In 2004 he led a demonstration at the Senate House in for the purpose of saving architecture as a degree in Cambridge.

He provided the voices on the series of short cartoons "", for which he also sang the theme tune. Other notable television work includes two documentaries re-creating the British comic novel "", in which he rowed up the Thames from London to Oxford with fellow comedians and . The team was reunited for a sequel, "Three Men in Another Boat", in which they attempted to sail from to in Rhys Jones' own restored racing yacht, "Undina". The two-part documentary was broadcast on the 1st and 2nd January 2008 on .

Rhys Jones has continued his acting career, having roles in "Casualty" and "Marple" as well as starring in ' drama series "" on ITV1. His documentary series "Mountain", for which he climbed fifteen UK peaks during 2006, [cite book | first=Griff | last=Rhys Jones | year=2007 | title=Mountain: Exploring Britain's High Places | edition=1st | publisher=Michael Joseph Ltd | id=ISBN 0718149890] was broadcast on – .

A resident of East Anglia, in 2002 he was awarded an honorary degree by the .

Rhys Jones also returned to his mother's roots in the village of Ferndale, Wales for the purposes of an episode of the BBC One series "", which was broadcast on . In the episode he detailed early memories and stories of his grandparents' fruit and vegetable shop on the high street and his mother's childhood concert performances at Trerhondda Chapel.

He provided the voice over for Brentwood School's 450th DVD in 2007, reading a script written by fellow Old Brentwood Jonathan Ruffle.

He presented a seasonal documentary, "Charles Dickens and the Invention of Christmas", which was broadcast on 2007 on BBC One.

It was announced in June 2008 that Rhys Jones was to become the President of , the nationwide charity that campaigns for better places in the built and green environment.

A new series of is being recorded and Rhys Jones is the new presenter, taking over from . The first programme was recorded at on 5th September 2008. [www.applausestore.com]

Rhys Jones has written or co-written many of the programmes he has appeared in, and a number of spin-off books.In 2002, he started writing a book called "", describing his adventures on the high seas with his sailing friend Bob, as they make their way to , port by port. Rhys Jones released the book in 2003, saying of the experience: "As a child you go out and play and you lose all track of time and space. It's harder and harder to attain that blissful state of absorption as you get older. I did a six-month sailing trip to St Petersburg with some mates just to get it back."

His early life has been captured in his autobiography, "Semi-Detached", published in 2006 by . His book to accompany the BBC1 series "Mountain" was published in July 2007.

Rhys Jones met his wife, Jo, a graphic designer, while working at the . He has described their first meeting by saying "The day we met, I was semi-naked and she was throwing water over me." The couple have two children, and live between homes in (previously in , now in a Grade I listed former office block in London’s West End) and Holbrook, .

A former heavy drinker, Rhys Jones is a teetotaler: "I don't drink so going to a party can become very tedious. By about 11 o'clock everybody goes to another planet and you're not there with them, so I tend to avoid that sort of thing." He also does not eat . He started running as a leisure pursuit in his early forties