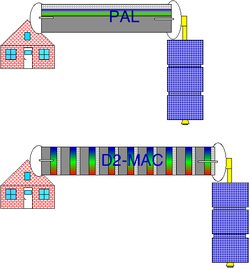 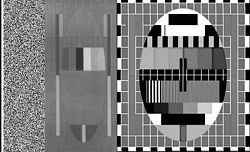 Multiplexed Analogue Components (MAC) was a satellite television transmission standard, originally proposed for use on a Europe-wide terrestrial HDTV system, although it was never used terrestrially.

MAC transmits luminance and chrominance data separately in time rather than separately in frequency (as other analog television formats do, such as composite video).

MAC was originally developed by the Independent Broadcasting Authority (IBA) (dates unknown) in the UK for delivering high quality pictures via direct broadcast satellites that would be independent of European countries' choice of terrestrial colour coding standard.[1]

A number of broadcasting variants of the MAC standard exist.

Although the MAC technique is capable of superior video quality, (similar to the improvement of component video over composite in a DVD player), its major drawback was that this quality was only ever realized when the video signals being transmitted remained in component form from source to transmitter. If at any stage the video had to be handled in composite form, the necessary encoding/decoding processes would severely degrade the picture quality.

Since the vast majority of TV stations and similar installations were only wired for composite video, the fitting of a MAC transmitter at the end of the chain had the effect of degrading the transmitted image quality, rather than improving it.

For this and other technical reasons, MAC systems never really caught on with broadcasters. MAC transmission technology was made obsolete by the radically new digital systems (like DVB-T and ATSC) in the late 1990s.

Although MAC transmission systems are still used, the technology is obsolete. It is expected that MAC will cease to be used for TV transmission by 2012.