Figure 1: A working mechanism of a Resonant Tunneling Diode device and negative differential resistance in output characteristic. Notice the negative resistance characteristic after the first current peak due to reduction of first energy level below source fermi level with gate bias. 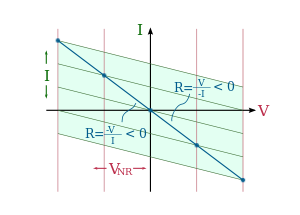 Figure 2: The IV curve of a theoretical negative resistor

In early research it was noticed that arc discharge devices and some vacuum tube devices such as the dynatron exhibit negative differential resistance effects.[4] Practical and economic devices only became available with solid state technology. The typical true negative impedance circuit—the negative impedance converter -- is due to John G. Linvill (1953)[5] and the popular element with negative differential resistance—the tunnel diode -- is due to Leo Esaki (1958).[6] 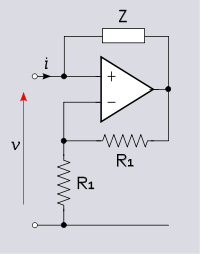 The negative resistance circuit shown in Figure 3 is an opamp implementation of the negative impedance converter (see below). The two resistors R1 and the op amp constitute a negative feedback non-inverting amplifier with gain A = 2. In the case Z = R, the input resistance (for an ideal opamp) is given by;

The input port of the circuit can be connected into another network as if it were a negative resistance component.

In the general case Z can be selected to produce negative capacitances or negative inductances. 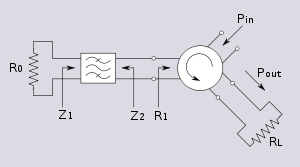 A device exhibiting negative resistance can be used to amplify a signal and this is an especially useful technique at microwave frequencies. Such devices do not present as pure negative resistance at these frequencies (in the case of the tunnel diode a large parallel capacitance is also present) and a matching filter is usually required. The reactive components of the device's equivalent circuit can be absorbed into the filter design so the circuit can be represented as a pure resistance followed by a bandpass filter. The output of this arrangement is fed into one port of a three-port circulator. The other two ports constitute the input and output of the amplifier with the direction of circulation as shown in the diagram. Treating R0 as being positive, the reflection coefficients at the two ends of the filter are given by;

Since the filter has no resistive elements, there is no dissipation and the magnitudes of the two reflection coefficients must be equal,

The input power entering the cirulator is directed at the matching filter, is reflected at both the input and output of the filter and a portion finally arrives at the load. This portion is given by;

For a well matched filter, the reflection coefficients will be very small in the passband and very little power will reach the load. On the other hand if R0 is replaced by a negative resistance such that,

Now the reflection coefficients are very large and more power is reaching the load than was injected in the input port. The net result of terminating one port in a negative resistance is amplification between the remaining two ports.[11]

The highly non-linear characteristics of tunnel diodes makes them useful as frequency mixers. The conversion gain of a tunnel diode mixer can be as high as 20 dB if it is biased to operate in the negative resistance region.[12]

Negative impedances can be used to cancel the effects of positive impedances, for example, by eliminating the internal resistance of a voltage source or making the internal resistance of a current source infinite. This property is used in telephony line repeaters[13] and in circuits such as the Howland current source,[14] Deboo integrator[15] and load cancellers.[16][17]