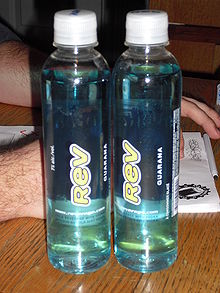 Two bottles of blue Rev, an alcopop from Canada.

Alcopops tend to be sweet and served in small bottles (typically 330 ml in Europe and 355 ml, the normal size of a soda pop can, in North America), and between 4% and 7% alcohol by volume. In Europe and Canada, alcopops tend to be pre-mixed spirits, including vodka (e.g. Smirnoff Ice) or rum (e.g. Bacardi Breezer). In the United States, on the other hand, alcopops often start out as un-hopped beers, depending on the state in which they are sold. Much of the malt (and alcohol) is removed (leaving mostly water), with subsequent addition of alcohol (usually vodka or grain alcohol), sugar, coloring and flavoring. Such drinks are legally classified as beers in virtually all states and can thus be sold in outlets that do not or cannot carry spirit-based drinks. There are, however, stronger ones that are simply pre-mixed spirits (e.g. Bacardi Rum Island Iced Tea), often containing about 12.5% alcohol by volume, that can only be sold where hard liquor is available. 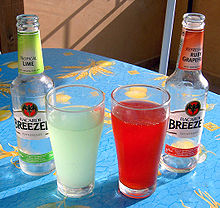 In the United States there is a proportionally limited tax on alcopops relative to those sold in Europe, though some states are considering legislation to bring their tax levels closer to the European model which is credited with limiting consumption by youth.[citation needed]

According to the U.S. Alcohol and Tobacco Tax and Trade Bureau (TTB):

Although flavored malt beverages are produced at breweries, their method of production differs significantly from the production of other malt beverages and beer. In producing flavored malt beverages, brewers brew a fermented base of beer from malt and other brewing materials. Brewers then treat this base using a variety of processes in order to remove malt beverage character from the base. For example, they remove the color, bitterness, and taste generally associated with beer, ale, porter, stout, and other malt beverages. This leaves a base product to which brewers add various flavors, which typically contain distilled spirits, to achieve the desired taste profile and alcohol level.

While the alcohol content of flavored malt beverages is similar to that of most traditional malt beverages, the alcohol in many of them is derived primarily from the distilled spirits component of the added flavors rather than from fermentation.

In some Continental European countries, such as Austria and Germany, bottled beer cocktails and shandies are available, which are being marketed the same way like alcopops. However, these beverages are based on traditional hopped beers and therefore not considered to be alcopops.

Wine coolers gained popularity in the US market in the 1980s when Bartles and Jaymes began advertising their brand of wine coolers, which were followed by other brands, including when Bacardi introduced the Breezer.[4] A growth in popularity occurred around 1993 with Two Dogs, DNA Alcoholic Spring Water, Hooper's Hooch and Zima, which was marketed under the title of "malternative beverage". Wine coolers were on the decline due to the increase in the US federal wine tax, and using a malt-beverage base became the new industry standard. Later, Mike's Hard Lemonade was released in the United States, with humorous commercials depicting what they called "violence against lemons". Smirnoff also came out with another citrus-flavored malt beverage in the United States in the late 1990s called Smirnoff Ice, which promoted itself with flashy commercials, usually involving trendy young people dancing in unlikely situations and places. (In the UK, Smirnoff Ice is marketed by Diageo as a PPS.)

Some have expressed concern that such drinks might appeal to children as they tend to be sweet and brightly colored. Many alcopop advertising campaigns have been criticized as trying to make alcopops appeal to young drinkers. In the United Kingdom, that led to a media outcry during the mid-1990s as the tabloid press associated alcopops with "under-age" drinking which damaged sales and would lead to off-licences withdrawing them from their stores.

In response to a complaint from the Center for Science in the Public Interest (CSPI), the Federal Trade Commission (FTC) conducted an extensive investigation in 2001. The agency "found no evidence of intent to target minors with the FMB products, packaging, or advertising. Furthermore, after reviewing the consumer survey evidence submitted by CSPI in support of the proposition that FMBs were predominantly popular with minors, the FTC concluded that flaws in the survey's methodology limited the ability to draw conclusions from the survey data."

The Federal Trade Commission again in 2003 investigated FMB ads, product placement, and internal company marketing documents after a directive from the conferees of the House and Senate Appropriations Committees. "The Commission’s investigation found no evidence of targeting underage consumers in the marketing of FMBs. Adults 21 to 29 appear to be the intended target of FMB marketing"[5] and found that "the majority of FMB drinkers are over the age of 27."[6]

In December 2003, Ireland raised the tax on alcopops to equal that of spirits, the second highest in Europe. Germany has imposed an extra duty of 0.80 to 0.90 euro per bottle effective August 1, 2004. To circumvent higher taxation, some German producers have switched to wine coolers, which are being marketed the same way. Some bottles now carry a warning stating that they are not for consumption by people under the legal drinking age (under 18 in the UK and 21 in the United States). On May 11, 2008, the Australian Government increased the excise tax on alcopops by 70%, to bring it inline with the tax on spirits. There is the concern this tax will encourage consumers to buy straight spirits and mix the drinks themselves,[citation needed] possibly resulting in drinks with a higher alcohol concentration than the premixed alternatives. This tax was revoked during March 2009 meaning the government had to pay back the 290 million collected on the tax.[citation needed]

The Federal Trade Commission report states, "Further, industry-conducted research on consumers over the age of 21 who use FMBs shows that these consumers generally view the FMBs as substitutes for beer, ... This research also concludes that consumers are not likely to consume more than two or three FMBs on any occasion because of the products’ sweetness.[6]

California's state assembly recently[when?] passed AB 346, a bill which requires manufacturers of "alcopops" to carry a 'warning' label stating "ATTENTION: THIS DRINK CONTAINS ALCOHOL." This bill was praised by groups advocating against alcohol use by minors and younger adults,[8] since these drinks are sometimes favored by young people due to their flavor.[citation needed] However, passage of a bill by the state assembly alone does not change the law and the state senate and governor had not yet[when?] endorsed the bill.[8]

The Australian government attempted to increase the tax on these drinks to the same rate as spirits, volumetrically, in an effort to stop binge drinking. The tax was criticized by the opposition as a tax grab, and voted down in the Senate on March 18, 2009.[9] Such a tax was in effect for some period of time,[when?] raising at least $AU 290 million after April 2008.[10] In April 2009, some Labor party members said that they planned to resubmit the tax to the Senate, where this time it was expected to pass.[10]

In the United Kingdom, alcopops were criticised as "insidious means by which the brewing companies seduce young people into the evils of drinking."[citation needed] Secretary of State for Health, Patricia Hewitt called for a tax increase on such products, although this had not yet happened as of December 2010.[11]