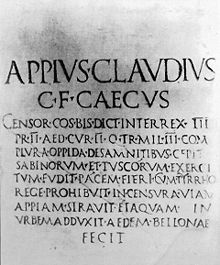 Appius Claudius Caecus ("the blind"; ca. 340 BC – 273 BC) was a Roman politician from a wealthy patrician family. He was dictator himself and the son of Gaius Claudius Crassus, dictator in 337 BC.[1]

He was a censor in 312 BC although he had not previously been consul.[2] He sought support from the lower classes, allowing sons of freed slaves to serve in the Senate, and extending voting privileges to men in the rural tribes who did not own land. During the Second Samnite War, he advocated the founding of Roman colonies throughout Latium and Campania to serve as fortifications against the Samnites and Etruscans.

During his term as censor, he built the Appian Way (Latin: Via Appia), an important and famous road between Rome and Capua, as well as the first aqueduct in Rome, the Aqua Appia. He also published for the first time a list of legal procedures and the legal calendar, knowledge of which, until that time, had been reserved for the pontifices, the priests. He was also concerned with literature and rhetoric, and instituted reforms in Latin orthography.

They later served as consul twice, in 307 BC and 296 BC, and in 292 BC and 285 BC he was appointed Dictator. In 280 BC, after he had gone blind (because of a curse, according to Livy), he gave a famous speech against Cineas, an envoy of Pyrrhus of Epirus, declaring that Rome would never surrender. This is the first recorded political speech in Latin, and is the source of the saying "every man is the architect of his own fortune" (Latin: quisque faber suae fortunae).[3]

Appius Claudius Caecus is used in Cicero's Pro Caelio as a stern and disapproving ancestor to Clodia. Cicero assumes the voice of Caecus in a scathing prosopopoeia, where Caecus is incensed at Clodia for associating with Caelius, a member of the middle equestrian class instead of the upper patrician class. Caecus's achievements, such as the building of the Appian Way and the Aqua Appia, are mentioned as being defiled by Clodia's actions.