The International Rule, also known as the Metre Rule, was created for the measuring and rating of yachts to allow different designs of yacht to race together under a handicap system. Prior to the ratification of the International Rule in 1907, countries raced yachts under the own national rules and international competition was always subject to various forms of subjective handicapping. 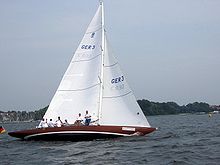 In the UK, merchant sailing vessels were historically measured using Builder's Old Measurement to measure tonnage and taxed according. The word 'ton' and hence 'tonnage' originates from the word 'tun' which is a measure of volume equivalent to the size of a barrel which could contain 252 gallons of wine. Due to the long history of measuring or rating merchant sailing ships by their tonnage so tonnage was naturally also used to measure or rate a sailing yacht. Accurately measuring of the internal volume of a sailing vessel was virtually impossible due to the continually changing curvature of a ship's hull from the bow to the stern. So a set of distances at points on the hull was defined to be measured and entered into a formula which then defined the tonnage and hence the taxes to be paid to the government of the day. As each ship was measured on the same basis it did not matter that the tonnage measurement was not a 100% accurate measure of volume as all vessels were measured on the same basis which led to an equitable basis of allocating tax.

During the early part of the 19th century interest in yacht racing had achieved sufficient momentum to need an agreed handicapping system to allow different types of yacht to race on an equitable basis. The method of measuring merchant sailing ships carried over into the world of yacht racing so that a yacht also now had a measured tonnage which allowed size comparisons and hence performance comparisons to be made between yachts on the basis that a properly designed big yacht will sail faster than a properly designed small yacht.

Each yacht fell within a Class based upon its measured tonnage. In the early 19th century four ranges of tonnage and hence four Classes were defined. Based on experience gained from the results of numerous races each Class was allocated a distance allowance that the Class had to give away to the next lower Class. This was equivalent to a Class 1 having to sail more distance than a Class 4 yacht during a race.

As yacht racing in particular became more and more popular designers started to look for and found loopholes in the measurement rules to enable a design to get a better rating. Whilst this encouraged designers it discouraged owners from participating in handicap racing because designs were being outdated almost before the yacht was launched.

In order to restore the equilibrium, work began on new formulas, which resulted, in the Thames Measurement which was the first formula defined for yachts.

The adoption of the British Thames Measurement by the Yacht Club of France in 1870 may mark the beginning of international rating rules. In 1893, the Germano-Scandinavian Union was formed and it developed its "Union Rule". Starting in 1902, under the leadership of the New York Yacht Club, U.S. yacht clubs agreed to a "Universal Rule" in 1905 which was based on a formula developed by Nathanael Herreshoff.

Development of the International Rule

By the early 20th Century yacht racing had spread across Europe but each country had its own different rating rules but they all typically used similar principles. International competition was always subject to various forms of handicapping which was often subjective and certainly open to protest

What was needed was a common rating or an agreed International Rule, which would enable yachts from one country to race competitively in a different country.

The leading yacht racing countries came together and laid down a system that calculated the rating of yachts, measurement rules, construction regulations (scantlings) and rules for racing. This was largely driven by the United Kingdom. The then Secretary of the YRA (now called the Royal Yachting Association), Brooke Heckstall-Smith had been in discussion with Scandinavians German and French yacht clubs and a conference was held at the Langham Hotel in London in July 1906. Representatives from eleven countries attended, together with an observer from the United States, plus several respected nautical engineers and designers and they started to formulate the International Rule.

A committee met again in October 1906 in Berlin to elaborate on the application of the Rule. The conference delegates met finally again in Paris in October 1907 and ratified the first International Rule which defined not only the rating of yachts and measurement rules but also construction regulations (scantlings) and racing rules. Delegates from this meeting went on to form the International Yacht Racing Union (IYRU); the precursor to the present International Sailing Federation (ISAF).

The USA sent observers to the meetings but did not initially adopt the first International Rule and continued with the Universal Rule based on the formula developed by Nathanael Herreshoff.

Evolution of the Rule

The International Rule eventually became the backbone of yacht racing. The Rule created a formula that took into account most problematic areas that had previously caused dissent among the racing nations. It does not restrict size—many individual classes were created. It allowed designers a degree of latitude—yet controlled unsafe extremes. It laid down construction rules and governed the use of materials—yet understood that the Rule must develop. 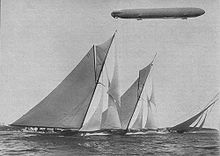 The International Rule has been the backbone of Yacht racing. The Rule created a formula that took into account most problematic areas that had previously caused dissent among the racing nations. It does not restrict size—many individual classes were created. It allowed designers a degree of latitude—yet controlled unsafe extremes. It laid down construction rules and governed the use of materials—yet understood that the Rule must develop.

It is important to note the term Metre does not refer to the length of the yacht; it is the product of a formula and denotes the class. A Six Metre yacht can be from 10 metres to 12 metres in length.

Metre Rule has proven to be successful and enduring, seeing only minor revisions over the years. Whilst many different Metre Class yachts were constructed during those first heady years, three sizes have maintained their popularity; the 6, 8 and 12 Metre Classes. The year after the ratification, the 12 Metre Class were chosen for the Olympics—the 6 and 8 Metres were also used at different stages. The 12 Metre Class was used for the America's Cup events until 1986. Relatively new arrival is one-person 2.4 Metre Class, currently active Paralympics class.

International Rule should not be confused with Square Metre Rule.

Why "Metre" is in the names International Rule yachts

It is commonly believed that the term Metre refers to the units of measurement used for the input values entered into the formula. This has led to the idea that the use of metric units for the formula represented a major concession on the part of the British whose preeminence in yachting at the time could have justified using Imperial units. In fact, the formula works equally well with Imperial Units. The relation between the length and area components of the formula are preserved whether in metric or Imperial Units.

The use of the term Metre refers to the unit of length used in the expression of the result of the calculation. If one uses Imperial Units, the result for a Six Metre yacht is 19.685 feet. The London Conference preferred the term "Six Metre" yachts to "19.685 Foot" yacht.

Why doesn't the "number" correspond to a yachts length?

For the International Rule, the rating number is approximately equal to the sailing length of the hull. These boats have long overhangs which allow the waterline length to increase as the boat heels over. A displacement hull's maximum speed (the hull speed) is directly proportional to the square root of its waterline length.[2]

It was the illustrious architect, Dixon Kemp, who began the tradition of expressing British rules as trivial fractions with a divisor of "2", thus starting the tradition of the age old question:

A recent development has been the 2.4 Metre Class—a Metre class boat designed for a solo sailor. As a keelboat, and unlike a dinghy, it does not require the crew to balance his weight to keep the boat from capsizing. Therefore, it has become a very popular class for the physically disabled, and is currently used in the Paralympics.

A group of Metre Class yacht owners, friends and enthusiasts are celebrating the centenary of the International Rule, in July, 2007, in Cowes UK, by organising a regatta for all Metre Class yachts.

About 6000 of the larger metre rule boats have been built since 1907. About half of them still exist , which is a remarkable number considering that most of them were built before World War II. Partly this is a result of the fact that the R-metre boats had to adhere to Lloyd's strict scantling rules, that has given them longevity that very few other traditional classes have been blessed with.

† Numbers without references are estimates.

In addition, over four thousand 2.4mR have built since the classes introduction in the 1980s.

Metre Boats in the Olympics

Since 2000, the 2.4mR has been used for the Sailing at Paralympic Games.