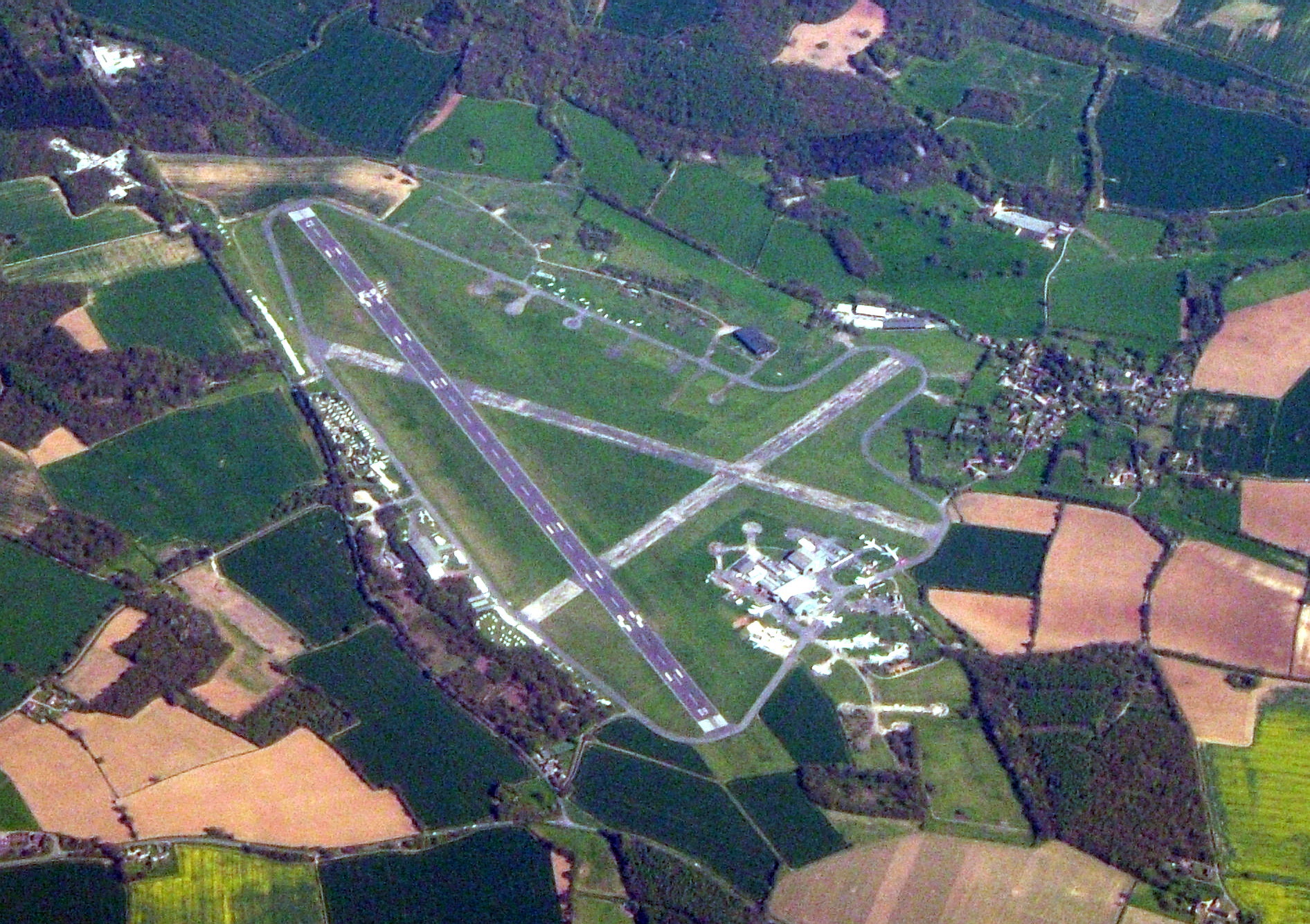 Lasham Airfield airport codes|QLA|EGHL is located 6 miles south-south-east of in , , near the village of . The airfield frequency is 131.025 .

The airfield is owned by one of the world's largest clubs, Lasham Gliding Society. Power pilots visiting the airfield require prior permission and a briefing on its hazards. These hazards are: dense concentrations of thermalling s (up to 100 gliders can be in the vicinity at once), winch cables up to 3000 feet above the ground, and occasional movements of large jet airliners. Over-flying aircraft are requested to not fly below 3618 feet . Visiting glider pilots also need to be aware of these hazards.

One of the most famous operations was by 613 Squadron. On 14 April 1944, at the request of resistance workers, six Mosquitos led by Wing Commander Bateson bombed the Central Records Registry of the in the from a height of 50 feet. The accuracy was such that the incriminating records were burnt. There was inevitable loss of life amongst the Dutch and German staff, but there were few civilian casualties in the nearby streets.

On the nights preceding and following , the Mosquitos of 305 and 613 squadrons carried out numerous low level attacks on enemy supply lines and armoured positions in Normandy to assist the allied landing forces.

The airfield ceased to be an operational RAF station in 1948, though General Aircraft Ltd continued testing military gliders. A memorial at the entrance was dedicated on 14 September 2006 to those served at Lasham between and .

In 1950 the Army Gliding Club was re-established by Major Tony Deane-Drummond, then an instructor at the . It operated at Odiham Airfield but after two accidents, the Commandant of Sandhurst ordered it to suspend operations. In early 1951 he ordered Major Deane-Drummond to restart the club at Lasham. In the meantime the Surrey Gliding Club and Imperial College Gliding Club were both seeking a new home because Redhill airfield had many other users. The Surrey club and Imperial College therefore moved to Lasham in August 1951. Lasham Gliding Society was established in 1958 to unify operations and it later signed a long lease on the airfield from the Ministry of Defence. The airfield's boundaries were reduced but it still occupies over 500 acres. The Defence Research Establishment later maintained a satellite station at Lasham but the dishes, one enclosed in a large white dome, have now been removed. Most of the buildings from have now been demolished. was Chief Flying Instructor at Lasham during much of the period from 1953 to 1989. and were also members for many years. In 1999 the Society bought the freehold of the airfield from the Ministry of Defence, making the final payment in 2001.

The airfield is home to one of the world's largest clubs, Lasham Gliding Society, and 210 are based there which are used by 640 full members. [ Verified with LGS ] The airfield is in constant use throughout the year and regularly hosts national and regional championships. There are approximately 55,000 aircraft movements (departures and landings) annually (roughly the same as ).

In 1954 established a subsidiary, Dan-Air Engineering, at Lasham Airfield to service its own fleet and aircraft belonging to other operators. Dan-Air ceased trading in 1992, and after a period of operation by FLS Aerospace, the facility has now been let by the Society to another aircraft maintenance company (). This company uses the main runway several times a week to bring in airliners for overhauls and is the largest employer in the area.

Glider launching occurs by two methods. Firstly there is winching in which a wire is attached to a release mechanism on the underside of the glider. The wire is also attached to one of two powerful winches each mounted on a truck. These winches can launch gliders to over 2000 ft above the ground. The second method of launching is aerotow and uses a fleet of five tug aircraft.

There are also eight single-seater club aircraft, previously operated by the Surrey & Hants Club. However there also 186 [ Verified with LGS ] other gliders at the airfield operated by private owners and by affiliated gliding clubs: , , , The Crown Service Gliding Club and the IBM Gliding Club.

Lasham Airfield is an available as an airport on .

Lasham Youth run a Saturday Evening gliding course during the summer months which is open to everyone, but enables them to provide an environment where young members can fly with people of similar ages.

They have their own instructors, tug pilots and winch drivers, and aim to be a centre of excellence and help individuals achieve their goals. In the event that bad weather rules out flying, they run lectures and simulator sessions instead.

Lasham Youth also organises expeditions so members can experience flying from different locations, along with a range of social activities throughout the year.