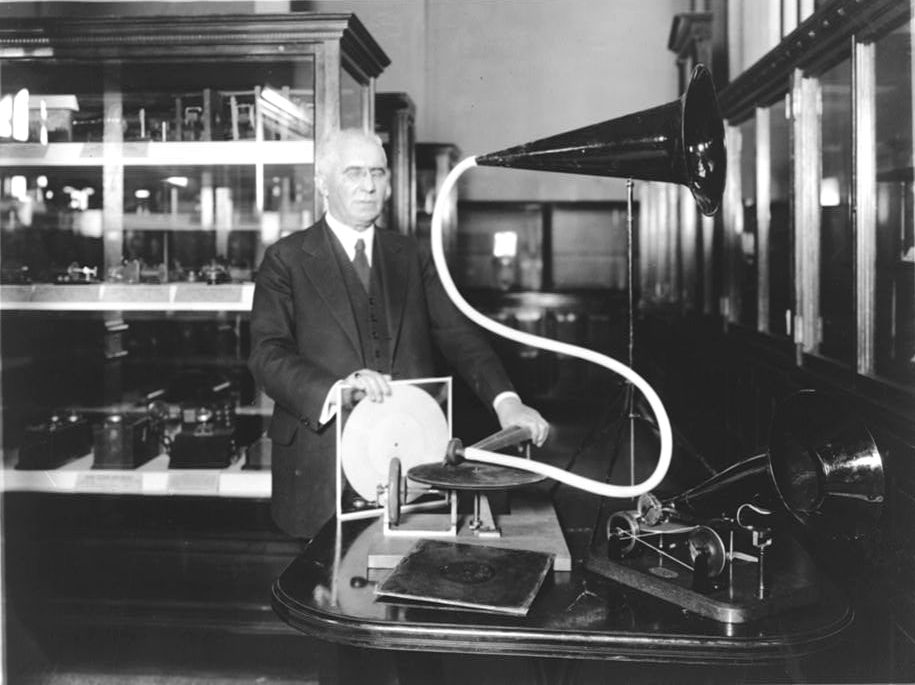 Born to a family in , , Emile Berliner immigrated to the United States of America in 1870, where he established himself in After some time working in a livery stable, he became interested in the new audio technology of the and , and invented an improved telephone transmitter (one of the first type of s) which was acquired by the Bell Telephone Company. Berliner subsequently moved to in 1877 and worked for Bell Telephone until 1883, when he returned to Washington and established himself as a private researcher.

In 1886 Berliner began experimenting with methods of . He was granted his first for what he called the "gramophone" in 1887. The first gramophones recorded sound using horizontal on a cylinder coated with a low resistance material such as , subsequently fixed with and then copied by on a metal playback cylinder. This was similar to the method employed by Edison's machines. In 1888 Berliner invented a simpler way to record sound by using discs. Within a few years he was successfully marketing his technology to companies. However, he hoped to develop his device as more than a mere toy, and in 1895 persuaded a group of businessmen to put up $25,000 with which he created the Berliner Gramophone Company.

A problem with early gramophones was getting the turntable to rotate at a steady speed during playback of a disc. Engineer helped solve this problem by designing a clock-work spring-wound motor. In 1901 Berliner and Johnson teamed up to found the .

Berliner's other inventions include a new type of for mass-production of cloth; an acoustic tile; and an early version of the . According to a July 1, 1909, report in , a helicopter built by Berliner and J. Newton Williams of , had lifted its operator (Williams) "from the ground on three occasions" at Berliner's laboratory in the Brightwood neighborhood of Washington, D.C. On , , Berliner and his son, Henry, demonstrated a working helicopter for the .

Berliner was also active in advocating improvements in public health and .

Emile Berliner died of a heart attack at the age of 78 and is buried in in Washington, D.C., alongside his wife and a son.

*"Conclusions", 1902, Kaufman Publishing Co.
*"The Milk Question and Mortality Among Children Here and in Germany: An Observation", 1904, The Society for Prevention of Sickness
*"Some Neglected Essentials in the Fight against Consumption", 1907, The Society for Prevention of Sickness
*"A Study Towards the Solution of Industrial Problems in the New Zionist Commonwealth", 1919, N. Peters
*"Muddy Jim and other rhymes: 12 illustrated health jingles for children", 1919, Jim Publication Company.

* [http://memory.loc.gov/ammem/berlhtml/berlhome.html Emile Berliner and the Birth of the Recording Industry] at the including audio archive
*Emile Berliner: [http://memory.loc.gov/ammem/berlhtml/berlsp.html Inventor of the Gramophone] (Library of Congress)
* [http://www.audioannals.com/berlinere.htm Berliner timeline] and patent list
* [http://www.nasm.si.edu/research/aero/aircraft/berliner.htm The Berliner helicopters] at the
*Berliner in the [http://www.invent.org/hall_of_fame/13.html Inventor's Hall of Fame]
* [http://home.att.net/~Berliner-Ultrasonics/berlemil.html Illustrated Berliner page]
* [http://fi.edu/case_files/berliner/ Contents of Berliner's case file] at The contains evidence and correspondence with Berliner regarding the award of his 1929 Franklin Medal for acoustic engineering and development of the gramophone
* [http://www.berliner.montreal.museum/berliner/ Musée des ondes Emile Berliner] in contains over 8000 recordings and 2000 other artifacts