Adenocarcinoma is a cancer of an epithelium that originates in glandular tissue. Epithelial tissue includes, but is not limited to, the surface layer of skin, glands and a variety of other tissue that lines the cavities and organs of the body. Epithelium can be derived embryologically from ectoderm, endoderm or mesoderm. To be classified as adenocarcinoma, the cells do not necessarily need to be part of a gland, as long as they have excretory properties. This form of carcinoma can occur in some higher mammals, including humans.[1] Well differentiated adenocarcinomas tend to resemble the glandular tissue that they are derived from, while poorly differentiated adenocarcinomas may not. By staining the cells from a biopsy, a pathologist can determine whether the tumor is an adenocarcinoma or some other type of cancer. Adenocarcinomas can arise in many tissues of the body due to the ubiquitous nature of glands within the body. While each gland may not be excreting the same substance, as long as there is an exocrine function to the cell, it is considered glandular and its malignant form is therefore named adenocarcinoma. Endocrine gland tumors, such as a VIPoma, an insulinoma, a pheochromocytoma, etc., are typically not referred to as adenocarcinomas, but rather, are often called neuroendocrine tumors. If the glandular tissue is abnormal, but benign, it is said to be an adenoma. Benign adenomas typically do not invade other tissue and rarely metastasize. Malignant adenocarcinomas invade other tissues and often metastasize given enough time to do so.

Adenocarcinoma not otherwise specified is often a preliminary diagnosis and can frequently be clarified by a pathologist with the use of immunohistochemistry.[2]

Cancer for which a primary site cannot be found is called cancer of unknown primary.

Examples of tissues where adenocarcinomas may arise:

Gross appearance of a colectomy specimen containing two adenomatous polyps (the brownish oval tumors above the labels, attached to the normal beige lining by a stalk) and one invasive colorectal carcinoma (the crater-like, reddish, irregularly-shaped tumor located above the label). 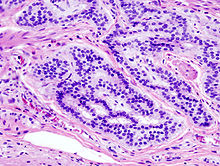 Histopathologic image of colonic carcinoid stained by hematoxylin and eosin.

The vast majority of colorectal cancer is an adenocarcinoma. This is because the colon has numerous glands within the tissue. Normal colonic glands tend to be simple and tubular in appearance with a mixture of mucus secreting goblet cells and water absorbing cells. These glands are called glands because they secrete a substance into the lumen of the colon, this substance being mucus. The purpose of these glands are twofold. The first is to absorb water from the feces back into the blood. The second purpose is to secrete mucus into the colon lumen to lubricate the now dehydrated feces. This is crucial as a failure to lubricate the feces can result in colonic damage by the feces as it passes towards the rectum.[3]

When these glands undergo a number of changes at the genetic level, they proceed in a predictable manner as they move from benign to an invasive, malignant colon cancer. In their research paper "Lessons from Hereditary Colorectal Cancer", Vogelstein, et al., suggested that colon cells lose the APC tumor suppressor gene and become a small polyp. Next, they suggested that k-Ras becomes activated and the polyp becomes a small, benign, adenoma. The adenoma, lacking the "carcinoma" attached to the end of it, suggests that it is a benign version of the malignant adenocarcinoma. The gastroenterologist uses a colonoscopy to find and remove these adenomas and polyps to prevent them from continuing to acquire genetic changes that will lead to an invasive adenocarcinoma. Volgelstein et al. went on to suggest that loss of the DCC gene and of p53 result in a malignant adenocarcinoma.[4]

Grossly, one will see a mass that looks of a different color than the surrounding tissue. Bleeding from the tumor is often apparent as the tumor tends to grow blood vessels into it in a haphazard manner via secretion of a number of angiogenesis promoting factors such as VEGF. Histologically, a glandular structure, similar to the healthy normal surrounding glands may be seen. If they look very similar, this is a low grade, well differentiated tumor. Often these glands will be disorganized and they will be seen growing back to back. However, if the tumor does not look like a gland anymore, it is a high grade tumor with poor differentiation. Regardless of the grade, malignant tumors tend to have a large nucleus with prominent nucleoli. There will also be a noticeable increase in the incidence of mitoses, or cell divisions.

Main article: Adenocarcinoma of the lung

Adenocarcinoma of the lung is currently the most common type of lung cancer in lifelong non-smokers.[5]

The term adenocarcinoma is derived from 'adeno' meaning 'pertaining to a gland' and 'carcinoma', which describes a cancer that has developed in the epithelial cells.