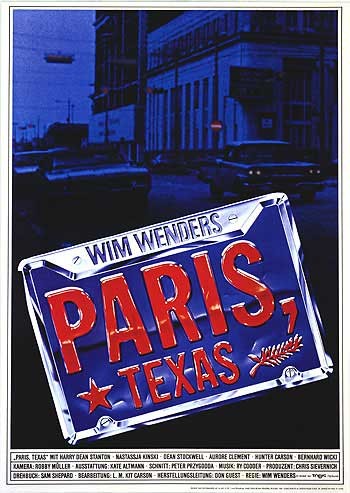 "Paris, Texas" is a directed by . The screenplay is by and , and the distinctive musical score was composed by . The is by .

The film stars as Travis, who has been lost for four years and is taken in by his brother (played by ). He later tries to put his life back together and understand what happened between him, his wife Jane (), and his son Hunter ().

The film was a between companies in and , but was filmed in the .

The film is named after the town of Paris, but no footage was shot there. Instead, Paris is referred to as the location of a vacant lot owned by Travis that is seen in a photograph.

The photograph shows a desert landscape, but in fact the real Paris rests on the edge of the forests of , far from any desert.

"Paris, Texas" is notable for its images of the Texan landscape and climate. The first shot is a bird's eye-view of the desert, a bleak, dry, alien landscape. Shots follow of old advertisement billboards, placards, graffiti, rusty iron carcasses, old railway lines, neon signs, motels, seemingly never-ending roads, and Los Angeles, finally culminating in some famous scenes shot outside a drive-through bank in down-town . The cinematography is typical of 's work, a long-time collaborator of .

The film is accompanied by a slide-guitar score by , based on 's "Dark Was The Night, Cold Was The Ground."

*Irish pop-rock group cite "Paris, Texas" as an inspiration for their album "".Fact|date=February 2007
*Scottish rock group, , sampled Nastassja Kinski in the film for use on their critically acclaimed album "".
*Both [ [http://www.nirvanaclub.com/get.php?section=info/nevermind [NFC: The Internet Nirvana Fan Club ] ] and [ [http://www.sweetadeline.net/32800chat.html sweet adeline | 03.28.00 chat at nme.com ] ] mentioned this film as one of their favorite movies of all time.
*Brooklyn-based band mentions the movie in their song "Comes a Time" from the album "".
*The last track of 's second album "" is a cover of 's theme song for the film.
*Scottish group Texas was named based on the film.
*The Scottish band Travis is named after the main character of this movie and mention the film in their song "New Amsterdam" from the album "".
*Video game developer named it his favorite movie in an IGN interview [http://wii.ign.com/articles/765/765721p1.html] .
*Australian band, Cog, have a song called "Paris, Texas".
*Francois Bovon was influenced to write Luke the Theologian after he saw "Paris, Texas".
*The film is mentioned by the comedy troupe in a skit on their television series.
*Los Angeles singer/songwriter Fontaine, has a song called "Paris, Texas".
*Instrumental rock band have a song called "From California to Houston, on lightspeed" which uses audio samples from the film. The song's title is also an homage to the film.