Taxobox
name = Bronzed Frog
status = NT | status_system = IUCN3.1 [IUCN2006|assessors=Biju "et al"|year=2004|id=58733|title=Rana temporalis|downloaded=11 May 2006 Database entry includes a range map and justification for why this species is near threatened]
trend = down 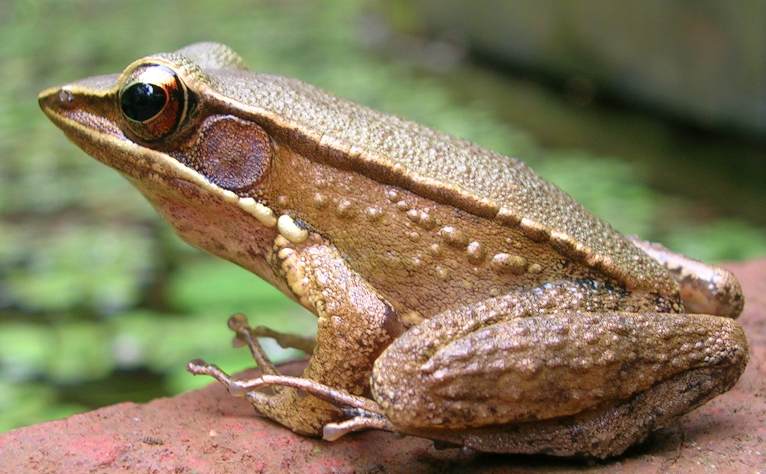 The Bronzed Frog ("Sylvirana temporalis") is a species of found in the , . They are usually found on or close to the ground. They are not shy and jump only when extremely provoked. They are the prey of many species of snake including the Malabar Pit Viper and the Vine Snake.

Vomerine teeth in two oblique series extending beyond the level of the hinder edge of the choanae. Head depressed, a little longer than broad; snout subacuminate, prominent, as long as the diameter of the orbit or slightly longer ; "canthus rostralis" angular; loreal region nearly vertical, strongly concave; Interorbital space as broad as the upper eyelid or rather broader; tympanum very distinct, as large as the eye or a little smaller. Fingers moderate, first extending beyond second; toes nearly entirely webbed; tips of fingers and toes dilated into well developed disks ; subarticular tubercles well developed; inner metatarsal tubercle oval, blunt; a small round, outer metatarsal tubercle; no tarsal fold. The tibio-tarsal articulation reaches the nostril, the tip of the snout, or a little beyond. Skin smooth or finely granulate above; a narrow glandular lateral fold. Brown above; loreal and temporal regions, and sometimes also the sides of the body, dark brown; a white labial band; limbs with dark cross bands; lower parts white, throat and breast more or less speckled with brown. Male with internal vocal sacs and an oval flat gland on the inner side of the arm. [Boulenger, G. A. (1890) The Fauna Of British India: Reptilia and Batrachia:]