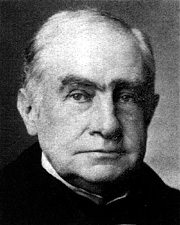 Henry Billings Brown (born South Lee, Massachusetts, , ; died , , ) was an associate justice of the from , to , . He is perhaps best known today as the author of the opinion for the Court in "", the famous decision that upheld the legality of in ation.

Brown grew up in a merchant's family. He graduated from Yale in 1856, and received some formal legal training both at Yale and at Harvard, although he did not earn a law degree. His early law practice was in Detroit, where he specialized in (i.e., shipping law on the ). Brown hired a substitute to take his place in the Union Army during the Civil War. He served as and in 1875 was appointed to the . Brown edited a collection of rulings and orders in important admiralty cases from inland waters, [cite book |last= Brown |first= Henry Billings |title= Reports of admiralty and revenue cases argued and determined in the circuit and district courts of the United States for the western lake and river districts [1856-1875] |origdate= 1876 |publisher= Baker, Voorhis & Co |location= New York ] which is still used as a reference in "." He also compiled a case book on admiralty law for his lectures at Georgetown University. [cite book |last= Brown |first= Henry Billings |title= Cases on the law of admiralty |origdate= 1896 |publisher= West Publishing Co |location= St. Paul ] He was a Republican prior to joining the court, but was not known for excessive partisanship. President appointed Brown to the U.S. Supreme Court on , .

Brown was generally unwilling to allow government intervention in business, and concurred with the majority opinion in "" striking down a limitation on maximum working hours. He did, however, support the federal income tax in "" (1895). Brown left diaries written from his college days until his appointment as a federal judge in 1875. They can be found in the Burton Historical Collection of the . His diaries suggest that Brown was personally likable (but ambitious), depressed and often full of doubt about himself. Near the end of his years on the Court he largely lost his eyesight. He died of heart failure. Brown is buried in in Detroit.

In 1864, Brown married Caroline Pitts, the daughter of a wealthy Detroit lumberman; they had no children.