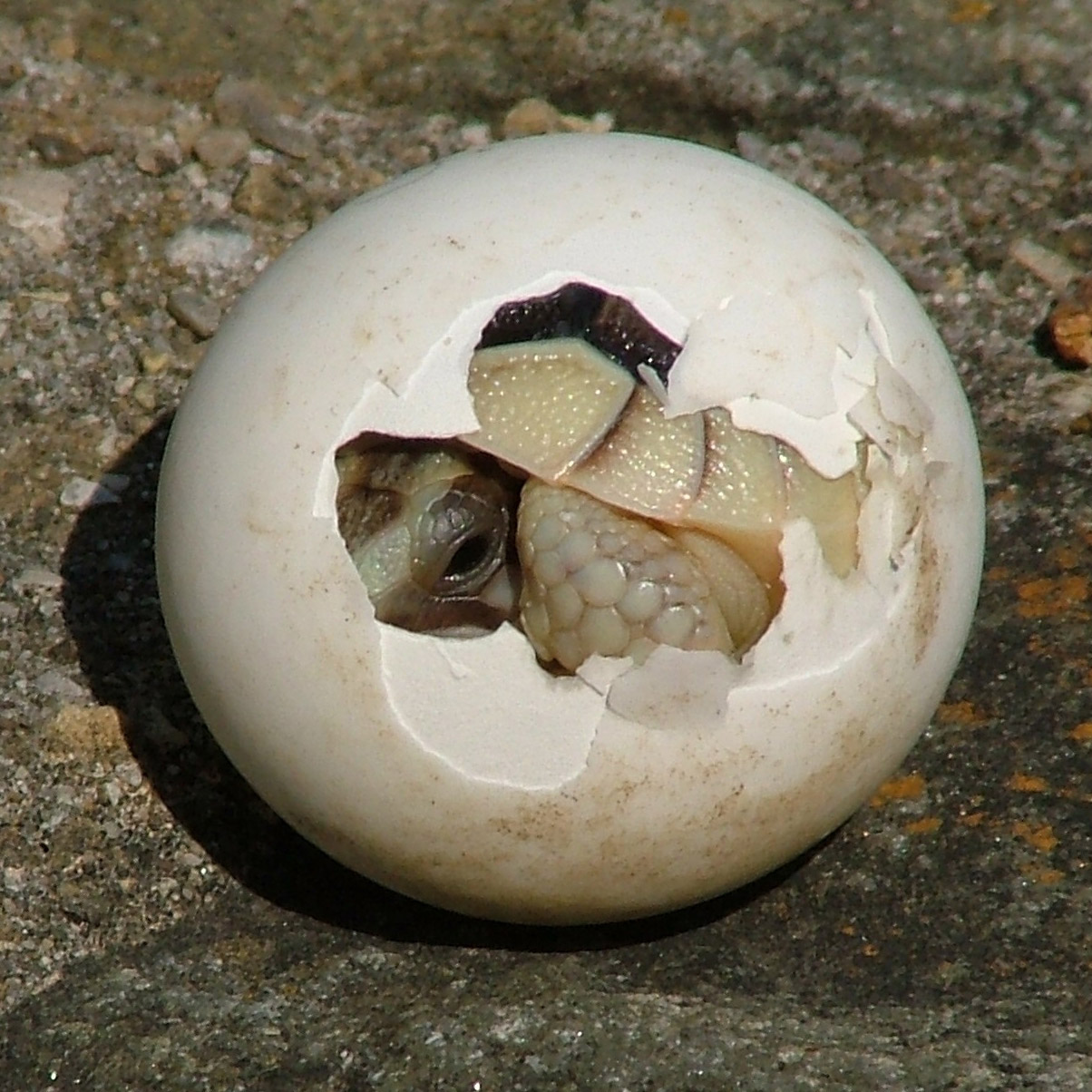 The amniotes are a group of s that include the (s and s) and (s and s, including s). Amniote embryos, whether laid as eggs or carried by the female, are protected and aided by several extensive membranes. In humans, these membranes include the that surrounds the fetus. These embryonic membranes, and the lack of a larval stage, distinguish amniotes from tetrapod s.

The first amniotes, which resembled small lizards, probably evolved 340 million years ago (""). Their eggs could survive out of the water, allowing amniotes to branch out into drier environments. The eggs could also "breathe" and cope with waste, allowing the eggs and the amniotes themselves to evolve into larger forms. The amniotes spread across the globe and became the dominant land vertebrates. The oldest known fossil is from about 320 million years ago, while the oldest known reptile is probably "", in the order , from the epoch (ca. 306-312 million years ago).

They are defined by embryonic development that includes the formation of several extensive membranes, the , , and . Amniotes develop directly into a (typically) terrestrial form with limbs and a thick stratified epithelium, rather than first entering a feeding larval tadpole stage followed by metamorphosis as in s. In amniotes the transition from a two-layered periderm to cornified epithelium is triggered by thyroid hormone during embryonic development, rather than metamorphosis [http://www.pnas.org/cgi/content/full/100/4/1769] . The unique embryonic features of amniotes may reflect specializations of eggs to survive drier environments, or the massive size and yolk content of eggs evolved for direct development to a larger size.

Features of amniotes evolved for survival on land include a sturdy but porous leathery or hard eggshell, and an evolved to facilitate respiration while providing a reservoir for disposal of wastes. Their s and s are also well-suited to water retention. Most mammals do not lay eggs, but corresponding structures may be found inside the .

The first amniotes, such as "Casineria kiddi", which lived about 340 million years ago, resembled small lizards. Their eggs were small and covered with a membrane, not a hard shell like most modern amniote eggs. Although some modern amphibians lay eggs on land, with or without significant protection, they all lack advanced traits like an amnion. This kind of egg only became possible with internal fertilization. The outer membrane, a soft shell, evolved as a protection against the harsher environments on land, as species evolved to lay their eggs on land where they were safer than in the water. One can assume the ancestors of the amniotes laid their eggs in moist places, as such modest-sized animals wouldn't have too many difficulties in finding depressions under fallen logs or other suitable places in the ancient forests, and dry conditions were probably not the main reason why the soft shell emerged.Or|date=September 2007

In fish and amphibians there is only one inner membrane, also called an embryonic membrane. In amniotes the inner anatomy of the egg has evolved further and new structures have developed to take care of the gas exchanges between the embryo and the atmosphere, as well as dealing with the waste problems. In order to grow a thicker and tougher shell new ways to supply the embryo with oxygen had to be developed as diffusion alone was not enough. After the egg had developed these structures, further sophistication allowed the amniotes to lay much bigger eggs in much drier habitats. Bigger eggs allowed for bigger offspring and bigger adults could produce bigger eggs, which meant that the amniotes developed the opportunity to grow bigger than their ancestors. Real growth was not possible however, until they stopped relying on small invertebrates as their main food source and started to eat plants or other vertebrates, or returned to the water. New habits and heavier bodies meant further evolution for the amniotes, both in behavior and anatomy.

There are three main lines of amniotes, which may be distinguished by the structure of the and in particular the number of e (openings) behind the eye. In s (turtles) there are none, in s (mammals and their extinct relatives) there is one, and in most s (non-anapsid reptiles, dinosaurs, and birds) there are two.

The skeletal remains of amniotes can be identified by their having at least two pairs of sacral s, a in the (some amniotes have lost it) and an astragalus bone in the .