Osteitis fibrosa cystica (pronounced /ˌɒstiːˈaɪtɨs faɪˈbroʊsə ˈsɪstɨkə/, US dict: ŏs′·tē·īt′·əs fī·brō′·sə sĭs′·tə·kə), abbreviated OFC, and also known as osteitis fibrosa, osteodystrophia fibrosa, not to be confused with Von Recklinghausen's disease of bone ([neurofibromatosis type I]]). Osteitis Fbrosa Cystica is a skeletal disorder caused by a surplus of parathyroid hormone from over-active parathyroid glands. This surplus stimulates the activity of osteoclasts, cells that break down bone, in a process known as osteoclastic bone resorption. The over-activity of the parathyroid glands, or hyperparathyroidism, can be triggered by parathyroid adenoma, hereditary factors, parathyroid carcinoma, or renal osteodystrophy. Osteoclastic bone resorption releases minerals, including calcium, from the bone into the bloodstream. In addition to elevated blood calcium levels, over-activity of this process results in a loss of bone mass, a weakening of the bones as their calcified supporting structures are replaced with fibrous tissue (peritrabecular fibrosis), and the formation of cyst-like brown tumors in and around the bone. The symptoms of the disease are the consequences of both the general softening of the bones and the excess calcium in the blood, and include bone fractures, kidney stones, nausea, appetite loss, and weight loss.

First described in the nineteenth century, OFC is currently detected through a combination of blood testing, X-rays, and tissue sampling. Before 1950, around half of those diagnosed with hyperparathyroidism in the United States saw it progress to OFC, but with early identification techniques and improved treatment methods, instances of OFC in developed countries are increasingly rare. Where treatment is required, it normally involves addressing the underlying hyperparathyroidism before commencing long-term treatment for OFC—depending on its cause and severity, this can range from hydration and exercise to surgical intervention.

Osteitis fibrosa cystica is defined as the classic skeletal manifestation of advanced hyperparathyroidism. Under the ICD-10 classification system, established by the World Health Organization, OFC is listed under category E21.0, primary hyperparathyroidism.[1]

The major symptoms of OFC are bone pain or tenderness, bone fractures, and skeletal deformities such as bowing of the bones. The underlying hyperparathyroidism may cause kidney stones, nausea, constipation, fatigue and weakness. X-rays may indicate thin bones, fractures, bowing, and cysts. Fractures are most commonly localized in the arms, legs, or spine.[2][3]

The addition of weight loss, appetite loss, vomiting, polyuria, and polydipsia to the aforementioned symptoms may indicate that OFC is the result of parathyroid carcinoma.[4] Parathyroid carcinoma, an uncommon cancer of the parathyroid glands, is generally indicated by serum calcium levels higher than usual, even in comparison to the high serum calcium levels that OFC generally presents with. Symptoms are also often more severe.[5] Generally, the presence of a palpable neck mass is also indicative of the cancer, occurring in approximately 50% of sufferers, but virtually nonexistent in individuals with OFC with a different origin.[6] 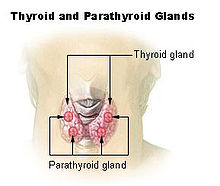 Diagram showing position of the parathyroid glands beside the thyroid

OFC is a common presentation of renal osteodystrophy, which is a term used to refer to the skeletal complications of end stage renal disease (ESRD). OFC occurs in approximately 50% of patients with ESRD.[12] ESRD occurs when the kidneys fail to produce calcitriol, a form of Vitamin D, which assists in the absorption of calcium into the bones. When calcitriol levels decrease, parathyroid hormone levels increase, halting the storage of calcium, and instead triggering its removal from the bones.[13]

The effects of OFC on bone are largely dependent on the duration of the disease and the level of parathyroid hormone (PTH) produced.[14] PTH is responsible for maintaining a homeostatic calcium concentration in the blood. It activates the parathyroid-hormone related protein receptor located on osteoblasts and osteocytes, both of which are responsible for the building and calcification of bone. Abnormalities affecting the parathyroid glands cause a surplus of PTH, which, in turn, increases the activity and frequency of osteoblasts and osteocytes.[15] Increased PTH levels trigger the release of stored calcium through the dissolution of old bone, as well as the conservation of serum calcium through a cessation in the production of new bone.[16][17]

Generally, the first bones to be affected are the fingers, facial bones, ribs, and pelvis.[18][19] Long bones, which are longer than they are wide, are also among the first affected.[19] As the disease progresses, any bone may be affected.[14] 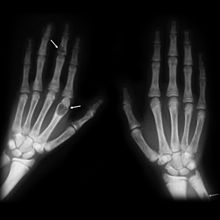 OFC may be diagnosed using a variety of techniques. Muscles in patients afflicted with OFC can either appear unaffected or "bulked up." If muscular symptoms appear upon the onset of hyperparathyroidism, they are generally sluggish contraction and relaxation of the muscles.[20] Deviation of the trachea (a condition in which the trachea shifts from its position at the midline of the neck), in conjunction with other known symptoms of OFC can point to a diagnosis of parathyroid carcinoma.[19]

X-rays may also be used to diagnose the disease. Usually, these X-rays will show extremely thin bones, which are often bowed or fractured. However, such symptoms are also associated with other bone diseases, such as osteopenia or osteoporosis.[25] Generally, the first bones to show symptoms via X-ray are the fingers.[18] Furthermore, brown tumors, especially when manifested on facial bones, can be misdiagnosed as cancerous.[25] Radiographs distinctly show bone resorption and X-rays of the skull may depict an image often described as "ground glass" or "salt and pepper".[26][27] Dental X-rays may also be abnormal.[2] 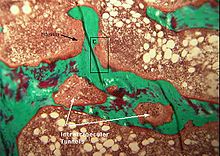 Cysts may be lined by osteoclasts and sometimes blood pigments, which lend to the notion of "brown tumors." Such cysts can be identified with nuclear imaging combined with specific tracers, such as sestamibi.[3] Identification of muscular degeneration or lack of reflex can occur through clinical testing of deep tendon reflexes, or via photomotogram (an achilles tendon reflex test).[20][28]

Fine needle aspiration (FNA) can be used to biopsy bone lesions, once found on an X-ray or other scan. Such tests can be vital in diagnosis and can also prevent unnecessary treatment and invasive surgery.[29] Conversely, FNA biopsy of tumors of the parathyroid gland is not recommended for diagnosing parathyroid carcinoma and may in fact be harmful, as the needle can puncture the tumor, leading to dissemination and the possible spread of cancerous cells.[30]

The brown tumors commonly associated with OFC display many of the same characteristics of osteoclasts.[19] These cells are characteristically benign, feature a dense, granular cytoplasm, and a nucleus that tends to be ovular in shape, enclosing comparatively fine chromatin. Nucleoli also tend to be smaller than average.[14]

Medical management of OFC consists of Vitamin D treatment, generally alfacalcidol or calcitriol, delivered intravenously. Studies have shown that in cases of OFC caused by either end-stage renal disease or primary hyperparathyoidism, this method is successful not only in treating underlying hyperparathyoidism, but also in causing the regression of brown tumors and other symptoms of OFC.[31]

In especially severe cases of OFC, parathyroidectomy, or the full removal of the parathyroid glands, is the chosen route of treatment. Parathyroidectomy has been shown to result in the reversal of bone resorption and the complete regression of brown tumors.[31] In situations where parathyroid carcinoma is present, surgery to remove the tumors has also led to the regression of hyperparathyroidism as well as the symptoms of OFC.[32]

Almost all who undergo parathyroidectomy experience increased bone density and repair of the skeleton within weeks. Additionally, patients with OFC who have undergone parathyroidectomy begin to show regression of brown tumors within six months.[34][35] Following parathyroidectomy, hypocalcaemia is common. This results from a combination of suppressed parathyroid glands due to prolonged hypercalcaemia, as well as the need for calcium and phosphate in the mineralization of new bone.[36]

Rates of OFC increase alongside cases of unchecked primary hyperparathyroidism. In developing countries, such as India, rates of disease as well as case reports often mirror those published in past decades in the developed world.[41][42]

The other 10% of cases are primarily caused by primary hyperplasia, or an increase of the number of cells. Parathyroid carcinoma accounts for less than 1% of all cases,[19] occurring most frequently in individuals around 50 years of age (in stark contrast to OFC as a result of primary hyperparathyroidism) and showing no gender preference.[19] Approximately 95% of hyperparatyhroidism caused by genetic factors is attributed to MEN type 1. This mutation also tends to affect younger individuals.[8] 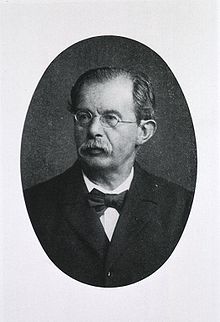 Friedrich Daniel von Recklinghausen, who is creited, along with Gerhard Engel, in naming OFC

The condition was first described by Gerhard Engel in 1864 and Friedrich Daniel von Recklinghausen in 1890, though William Hunter, who died in 1783, is credited with finding the first example of the disease.[43][44] "von Recklinghausen's disease" (without the qualification "of bone") is a completely unrelated disorder, nowadays termed neurofibromatosis.[7] In 1884, Davies Colley delivered a presentation to the Pathological Society of London that detailed the manifestation of hyperparathyroidism into a brown tumor of the mandible, as well as the histological makeup of the tumor.[45]

The discovery and subsequent description of the parathyroid glands is credited to Ivar Sandstrom, though his publication, On a New Gland in Man and Several Mammals-Glandulae Parathyroideae, received little attention. Gustaf Retzius and Eugene Gley compounded his research, the latter credited with the discovery of the function of the parathyroid glands.[45] This research cumulated in the first surgical removal of a parathyroid tumor by Felix Mandel in 1925. A 2.5 × 1.5-inch (64 × 38 mm) tumor was removed from the thyroid artery of a man suffering from advanced OFC. The patient's symptoms disappeared, only to return in approximately six years as a result of renal stones that were diagnosed only after the patient had died. In 1932, blood tests on a female patient suffering from renal stone-based OFC revealed extremely high blood calcium levels. Fuller Albright diagnosed and treated the woman, who suffered from a large tumor of the neck as well as renal stones.[7]

The first published literature to describe a brown tumor (which was linked to OFC) was published in 1953, though clinical reports from before 1953 do draw a correlation between the disease and tumors previous to the publication.[46]