The Museo Nacional Centro de Arte Reina Sofía (MNCARS) is the official name of Spain's national museum of 20th century art (informally shortened to the Museo Reina Sofía, Queen Sofia Museum, El Reina Sofia, or simply The Sofia).[citation needed] The museum was officially inaugurated on September 10, 1992 and is named for Queen Sofia of Spain. It is located in Madrid, near the Atocha train and metro stations, at the southern end of the so-called Golden Triangle of Art (located along the Paseo del Prado and also comprising the Museo del Prado and the Museo Thyssen-Bornemisza).

It also hosts a free-access library specializing in art, with a collection of over 100,000 books, over 3,500 sound recordings and almost 1,000 videos.

The central building of the museum was once a 18th century hospital. Extensive modern renovations and additions to the old building were made starting in 1980. In 1988, portions of the new museum were opened to the public, mostly in temporary configurations; that same year it was decreed by the Ministry of Culture as a national museum. Its architectural identity was radically changed in 1989 by Ian Ritchie with the addition of three glass circulation towers. An 8000 m2 (86,000 ft2) expansion costing €92 million designed by French architect Jean Nouvel opened October 2005. 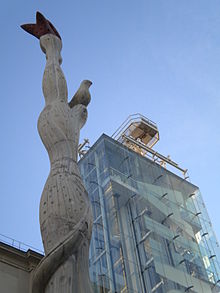 Close up of the front of the Reina Sofía in Madrid Spain.

The museum features, as a major protagonist, in Jim Jarmusch's The Limits of Control (2009).