Shekel (sheqel, Akkadian: šiqlu or siqlu, Hebrew: שקל‎, pl. shekels, sheqels, sheqalim, Hebrew: שקלים‎), is any of several ancient units of weight or of currency. The first usage is from Mesopotamia around 3000 BC. Initially, it may have referred to a weight of barley. This shekel was about 180 grains (11 grams or .35 troy ounces).

The word shekel is derived from the Akkadian šiqlu or siqlu, a unit of weight equivalent to the Sumerian gin2.[1] Use of the word was first attested in c.2150 BCE during the Akkadian Empire under the reign of Naram-Sin, and later in c.1700 BCE in the Code of Hammurabi. The word came in to the English language via the Bible, where it is first used in the Book of Genesis.

The earliest shekels were a unit of weight, used as other units such as grams and troy ounces for trading before the advent of coins. Coins were invented by the early Anatolian traders who stamped their marks to avoid weighing each time used. Early coins were money stamped with an official seal to certify their weight. Silver ingots, some with markings were issued. Later authorities decided who designed coins. (Detroit Institute of Arts, 1964) Herodotus states that the first coinage was issued by Croesus, King of Lydia, spreading to the golden Daric (worth 20 sigloi or shekel[2]), issued by the Persian Empire and the Silver Athenian obol and drachma.

As with many ancient units, the shekel had a variety of values depending on era, government and region; weights between 9 and 17 grams, and values of 11,[3] 14, and 17 grams are common. A shekel is a gold or silver coin equal in weight to one of these units. It is especially the chief silver coin of the Hebrews.

The shekel was common among western Semitic peoples. Moabites, Edomites and Phoenicians used the shekel, the latter as coins and weights. Punic coinage was based on the shekel, a heritage from Canaanite ancestors.

The Aramaic tekel similar to the hebrew shakal used in the writing on the wall during the feast of Belshazzar, according to the Book of Daniel defined as weighed shares a common root with the word shekel and may even additionally attest to its original usage as a weight.

The shekel of Tyre 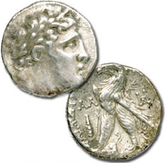 Silver Tyrian shekels were the medium of payment for the Temple tax in Jerusalem, and have been suggested as a possible coin used as the "30 pieces of silver" in the New Testament.[4]

The shekel of Tyre was subsequently replaced as the Temple tax in 66 C.E. by the Jerusalem shekel of the First Jewish revolt against Rome.

Bar Kochba silver shekel/tetradrachm. Obverse: the Jewish Temple facade with the rising star, surrounded by "Shimon". Reverse: A lulav, the text reads: "to the freedom of Jerusalem"

During the Bar Kokhba revolt against the Roman Empire 132–5 CE, the Jews of Judea struck Bar Kochba shekels.

Since 1980, the shekel has been the currency of the modern state of Israel, first the Israeli shekel, then (since 1985) the Israeli new shekel.