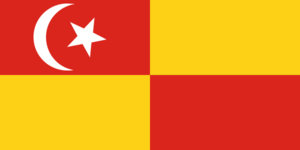 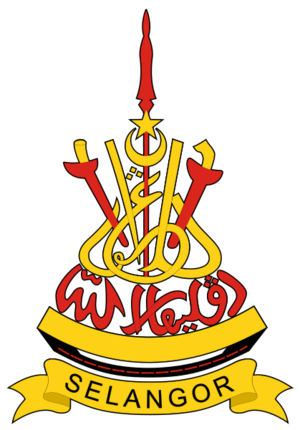 Selangor (: سلاڠور, population 7.2 million) is one of the 13 states of . It is on the west coast of and is bordered by to the north, to the east, to the south and the to the west. It completely surrounds the federal territories of and .

The origin of the name "Selangor" is lost in history, although some sources claim the name to have come from the Malay word "selangau", 'a large ', most probably due to the abundance of flies in the marshes along the in the state's north-west. Another more plausible theory claims the state's name is derived from the term "Selang Ur" meaning "land of the straits" ("ur" means "land" in Tamil, "selang" means "straits" in the Malay language).

Selangor is also known by its Arabic honorific, Darul Ehsan ("Abode of Sincerity").

The state is a hereditary constitutional monarchy, of which the reigning Sultan (since 2001) is Sultan Sharafuddin Idris Shah. The (chief executive of the state government) is currently , of the since 10 March 2008.

The state capital is and the royal capital is . A third major urban centre is which was awarded city status on . Hence, Selangor is one of only two Malaysian states with more than one city; the other being .

In the 15th century, Selangor was ruled by the . After the fall of Malacca to the Portuguese in 1511, the area became hotly disputed between the Portuguese, , and . When the Dutch displaced the Portuguese from Malacca in 1641, they brought in from , who eventually established the present sultanate in 1740. In many districts, Bugis settlers displaced the settlers from , who had established themselves in Selangor some 100 years previously. In the 19th century, the economy boomed due to the exploitation of huge reserves and the growing importance of . This attracted a large influx of Chinese migrants. Chinese secret clan societies, allied with Selangor chiefs fought for control of the tin mines, and the increasing violence created social and economic havoc. It also opened a window of opportunity for the British, who forced the to accept a in 1874. Under the stability imposed by the British, Selangor again prospered. In 1896, largely through the coordination of the Resident , Selangor united with , and to form the , with its capital in . The Federated Malay States evolved into the in 1948 and the Federation of Malaysia in 1963. In 1970, Selangor relinquished the city of Kuala Lumpur to the federal government. Putrajaya also became a federal territory in the mid-1990s.

Selangor currently is the richest, most industrialized and most urbanized of all Malaysian states. The Menteri Besar of Selangor declared Selangor as a developed state on .

Selangor is Malaysia's most populous state, with the nation's biggest , the . Selangor's geographical position in the centre of contributed to the state's rapid development as Malaysia's transportation and industrial hub, which in turn attracts migrants from other states as well as overseas, especially from , , , , , , , and . The influx of s, particularly from Indonesia, has further contributed to Selangor's rapid population growth.

The of the State of Selangor came into force on the 26 of February 1959. The constitution is separated into two parts titled;

*" THE FIRST PART OF THE LAWS OF THE CONSTITUTION "

*" THE SECOND PART OF THE LAWS OF THE CONSTITUTION "

Under the 1959 constitution, Selangor is a .

This position is hereditary and can only be held by a member of Selangor's royal family. The current ruler is His Royal Highness Sultan Sharafuddin Idris Shah, who has held this position since 2001.

The State Executive Council, which along with the Sultan is Selangor's executive branch of government, was established by the constitution of 1959. It is composed of the , who is its chairman and Selangor's head of government, and ten other members. The Menteri Besar and other members of the council are appointed by the Sultan of Selangor from members of the State Assembly. The current Menteri Besar is Tan Sri Abdul Khalid Ibrahim, of the Parti Keadilan Rakyat (PKR, or People's Justice Party)

Menteri Besar of Selangor since 1949

There are 12 local authorities in Selangor, namely:

The traditional culture of Selangor's Malay majority is influenced by those of , , , and Javanese ancestry.

Being the most developed state in Malaysia, Selangor also receives a lot of Western influence.

The traditional Malay cuisine in Selangor has received influences from , , and .

"", "Lontong Klang" and "Mee Bandung" are famous cuisines in Klang and Shah Alam (Note: "Mee Bandung" is also touted to have originated from Johor). Other famous dishes include "Mee Jawa" (which is similar to "Mee Rebus" in Johor), "Satay Kajang", "Ketam Darul Ehsan", "Kuah Asam Pedas" and "Sayur Masak Rebung".

"" is famous among the Chinese population. It is a herbal pork soup which is eaten during breakfast, lunch, and dinner.

Coastal towns such as Klang and are also famed for seafood.