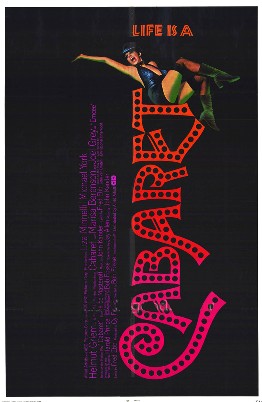 "Cabaret" is a 1972 American directed by and starring , Michael York and . The film is set in during the in 1931, before the rise of the Nazis under .

The film is loosely based on the 1966 Broadway musical "Cabaret" by , which was adapted from the Berlin stories of and the play "" which they inspired. Only a few numbers from the stage score were used; Kander and Ebb wrote new ones to replace those that were discarded. In the traditional manner of musical theater, characters in the stage version of "Cabaret" sing to express emotion and advance the plot, but in the film version, musical numbers are confined to the stage of the cabaret and to a . Only two of the film's major characters sing any songs.

"Cabaret" was nominated for 10 in 1973, and nearly performed a clean sweep, winning 8, including Best Director (), Best Actress (), Best Actor in a Supporting Role (), and winning for Cinematography, Editing, Music, Art Direction and Sound (losing Best Picture and Best Adapted Screenplay to ""). It won 7 awards, including Best Film, Best Direction and Best Actress, and the Golden Globe Award for Best Motion Picture (Musical or Comedy). "Cabaret" was produced by ABC Pictures and first distributed in the US by . is the current US distributor.

In 1995, this film was selected for preservation in the as being deemed "culturally, historically, or aesthetically significant."

"Cabaret" was shot mainly in low light and has a feel, even though it was filmed in color.

In early 1930s , American singer Sally Bowles () performs at the Kit Kat Club. A new arrival in the city, Brian Roberts (Michael York), moves into Sally's apartment building. A reserved English academic and writer, Brian gives English lessons to earn a living while completing his German studies. Sally unsuccessfully tries to seduce Brian and suspects he may be gay (, on whose semi-autobiographical book the film is indirectly based, was gay and reportedly "went to Berlin in search of boys to love").

Brian tells Sally he has tried to have romantic relationships with women, all of which have failed. The unlikely pair become friends, and Brian is witness to Sally's anarchic, bohemian life in the last days of the German . Later in the film, Sally and Brian become lovers despite their earlier reservations, and Brian and Sally conclude with irony that his previous failures with women were because they were "the wrong three girls."

Sally befriends Maximilian von Heune, a rich playboy baron who takes her and Brian to his country estate. It becomes ambiguous which of the duo Max is seducing, epitomized by a scene in which the three dance intimately together in a wine-induced reverie. Max eventually loses interest in the two, and leaves them back in Berlin. When Sally triumphantly tells Brian that she slept with Max, Brian begins to laugh and reveals that he slept with Max as well. After the ensuing argument, Brian storms off and picks a fight with a group of Nazis, who beat him senseless. Brian and Sally make up in their rooming house, where Sally reveals that Max left them an envelope of money.

Later on, Sally finds out that she's pregnant and is unsure whether Brian or Max is the father. Brian offers to marry her and take her back to his university life in , but Sally realizes they could never coexist in such a life (and fears that Brian will turn to men) and proceeds with a planned abortion. When Brian confronts her, she shares her fears and the two reach an understanding. The film ends with Brian departing for England by train, and Sally continuing her life in Berlin.

The club's (unnamed) master of ceremonies () is seen only in his stage persona, but provides repeated knowing looks to the camera that the party is about to end. One brief moment in a sequence of Sally's memories, towards the end, shows the master of ceremonies holding her breasts - hinting that she may have had sexual relations with him at some past time, though this is left deliberately ambiguous.

A subplot concerns Fritz Wendel, a Jew passing as a Christian. Fritz eventually reveals his true background when he falls for Natalia Landauer, a wealthy Jewish heiress. Although they marry, we are left wondering what their fate will be.

The Nazis' violent rise is a powerful, ever-present undercurrent in the film. Though explicit evidence of their actions is only sporadically presented, their progress can be tracked through the characters' changing actions and attitudes. While in the beginning of the film Nazis are sometimes harassed (one was kicked out of the Kit Kat Club originally), a scene towards the end shows everyday Germans rising in song to rally around Nazism. At the end of the film, the camera passes by a mirror at the Kit Kat Club, showing many Nazis in the audience.

The rise of the Nazis and their increasing influence on German society is dramatically demonstrated in the scene: A boy - only his face seen - sings to the seated guests what first seems an innocent lyrical song about the beauties of nature. This gradually shifts to the strident "Tomorrow Belongs To Me" as the camera shifts to show that the boy is wearing a brown Nazi uniform and lifts his hand in the Nazi straight arm salute. One by one, nearly all guests in the beer garden (except a bewildered old man) get up and join in the singing and saluting - evidently out of social pressure rather than any physical coercion, which is clearly not used.

Although the songs throughout the film allude to and advance the narrative, every song except "Tomorrow Belongs To Me" is executed in the context of a Kit Kat Club performance.

Differences in film from stage version

The film is significantly different from the Broadway musical. To accommodate Minnelli, Sally Bowles is Americanized. The character of Cliff Bradshaw was renamed Brian Roberts and made British and bisexual. The character of Max didn't exist in the play (though probably was based on the book's character, Clive), nor did the trip out of Berlin. The Broadway version used special settings to separate the fantasy world of the Cabaret from the darker rest of the world. Fosse essentially created a film with music instead of a musical.

Fosse cut all the book songs that advanced the plot, leaving only the songs that are sung within the confines of the Kit Kat Klub. One exception is "Tomorrow Belongs to Me," which is sung in a beer garden. In the stage play, it is sung at a private party. Another is "Married," which is played on a phonograph record when Sally and Brian are having a picnic in the woods. Kander and Ebb wrote several new songs for the movie and removed others; "Don't Tell Mama" was replaced by "Mein Herr," and "Sitting Pretty" (retained in various instrumental versions) was replaced by "Money, Money." Several characters were cut (including Herr Schultz, with Fraulein Schneider's part greatly reduced and the whole romantic subplot removed) and several from Isherwood's original stories put back in. The entire score was re-orchestrated, with all the numbers being accompanied by the stage band.

The following songs from the original Broadway production are missing in the film version, but are still available on the Original Broadway Cast album:
*"So What?"
*"Don't Tell Mama"
*"Telephone Song"
*"Perfectly Marvelous"
*"Why Should I Wake Up?"
*"Meeskite"
*"What Would You Do?"

"All songs written by John Kander and Fred Ebb"

is reportedly in talks to star in a remake of Cabaret, taking the role of Sally Bowles. Zellweger reportedly said: "I do love a challenge as an actress and this would be one of the biggest." [http://broadwayworld.com/viewcolumn.cfm?colid=4830]