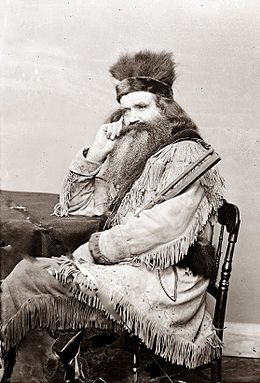 Hunter and trapper Seth Kinman in 1864

Mountain men were trappers and explorers who roamed the North American Rocky Mountains — from about 1810 through the 1880s (with a peak population in the early 1840s) where they were instrumental in opening up the various Emigrant Trails (widened into wagon roads) allowing Americans in the east to settle the new territories of the far west by organized wagon trains traveling over roads explored and in many cases, physically improved by the mountain men and the big fur companies originally to serve the mule train based inland fur trade.

They arose in a natural geographic and economic expansion driven by the lucrative earnings available in the North American fur trade, in the wake of the various 1806–07 published accounts of the Lewis and Clark expeditions' (1803–1806) findings about the Rockies and the (ownership disputed) Oregon Country where they flourished economically for over three decades.

By the time the two new international treaties in early 1846 and early 1848 respectively[1] settled new western coastal territories officially on the United States and spurred a large upsurge in migration, the days of many Mountain men making a good living by fur trapping had become a thing of the past as the industry was a failing subsistence because of over trapping activity vice the lucrative boom business it once been. Fortuitously, America's ongoing western migration by wagon train with the goal of claiming cheap lands in the west was however building rapidly from a trickle of settlers from 1841's opening of the Oregon Trail (now a wagon road) to a flood of emigrants headed west by 1847–49 and thereafter well into the later 1880s.

With the silk trade and over trapped (scarcity driven) quick collapse of the North American beaver based fur trade in the later 1830s–1840s, many of the mountain men settled into jobs as Army Scouts, wagon train guides and settlers in and through the lands which they had helped open up. Others, like William Sublette opened up fort-trading posts along the Oregon Trail to service the remnant fur trade and the settlers heading west.

Mountain men were ethnically, socially, and religiously diverse, fitting no ready stereotype, and while they considered themselves independent, were in fact, economically an arm of the big fur companies which held annual fairs for the mountain men to sell their wares known as Trapper's rendezvous. Most were born in Canada, the United States, or in Spanish-governed Mexican territories, although some European immigrants also moved west in search of financial opportunity, and the French and British both had long standing active fur trading industries in Canada. Like any businessman, Mountain men were primarily motivated by profit, trading Amerindians (and sometimes trapping) for beaver and other skins and selling the skins, although some few were more interested in exploring the West and traded solely to support their passion. As such, most of them were part trader, part explorer, part exploiter, part trappers, part teamsters, and part settlers, sometimes farmers or occasional (army) hired scouts; most survived and kept their scalps by having good relations with one or more native tribes, being multilingual out of necessity, and quite frequently living part of the year (mainly winters) with Amerindians and as often, taking Indian wives in the normal course of human events. By the time the fur trade began to collapse in the 1840s providing motivation to change jobs, the trails they had explored and turned into reliable mule trails and improved gradually into wagon capable freight roads combined to allow them to hire themselves as guides and scouts, just as the great push west along the newly opened Oregon Trail built up from a trickle of settlers in 1841 to a steady stream in 1844–1846, and then became a flood as the highly organized Mormon migration exploited the road to the Great Salt Lake discovered by mountain man Jim Bridger in 1847–1848. The migration would explode in 1849's "The Forty-Niners" in response to the discovery of gold in California in 1848. Manifest Destiny had received a powerful push in the spring and summer of 1846 with the international treaties settling the ownership of the Pacific coast territories and the Oregon Country on the United States.

Historical reenactment of the dress and lifestyle of a mountain man, sometimes known as buckskinning, allows people to recreate aspects of this historical period. Today's Rocky Mountain Rendezvous and other reenacted events are both history-oriented and social occasions. Some modern men choose a lifestyle similar to that of historic mountain men. They may live and roam in the mountains of the west or the swamps in the southern United States. 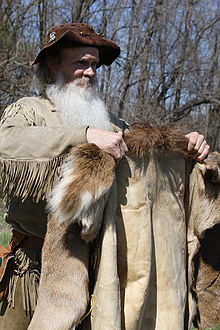 Approximately 3,000 mountain men ranged the mountains between 1820 and 1840, the peak beaver-harvesting period. While there were many free trappers, most mountain men were employed by major fur companies. The life of a company man was almost militarized. The men had mess groups, hunted and trapped in brigades and always reported to the head of the trapping party. This man was called a "boosway", a bastardization of the French term bourgeoisie. He was the leader of the brigade and the head trader.

Donald Mackenzie, representing the North West Company, held a Rendezvous in the Boise River Valley in 1819.[2] The rendezvous system was later implemented by William Henry Ashley of the Rocky Mountain Fur Company, whose company representatives would haul supplies to specific mountain locations in the spring, engage in trading with trappers, and bring pelts back to communities on the Missouri and Mississippi rivers in the fall. Ashley sold his business to the outfit of Smith, Jackson and Sublette. He continued to earn revenue by selling that firm their supplies. This system of rendezvous with trappers continued when other firms, particularly the American Fur Company owned by John Jacob Astor, entered the field.

The annual rendezvous was often held at Horse Creek on the Green River, now called the Upper Green River Rendezvous Site, near present-day Pinedale, Wyoming. By the mid-1830s, it attracted 450-500 men annually, essentially all the American trappers and traders working in the Rockies, as well as numerous Native Americans. In the late 1830s, the Canadian-based Hudson's Bay Company (HBC) instituted a policy to destroy the American fur trade. The HBC's annual Snake River Expedition was transformed to a trading enterprise. Beginning in 1834, it visited the American Rendezvous to buy furs at low prices. The HBC was able to offer manufactured trade goods at prices far below that with which American fur companies could compete. Combined with a decline in demand for and supply of beaver, by 1840 the HBC had effectively destroyed the American system. The last rendezvous was held in 1840. During the same years, fashion in Europe shifted away from the formerly popular beaver hats; at the same time, the animal had become overhunted. After achieving an American monopoly by 1830, Astor got out of the fur business before its decline.

By 1841 the American Fur Company and the Rocky Mountain Fur Company were in ruins. By 1846 only some 50 American trappers still worked in the Snake River country, compared to 500-600 in 1826. Soon after the strategic victory by the HBC, the Snake River route was used for emigrants as the Oregon Trail, which brought a new form of competition. Former trappers earned money as guides or hunters for the emigrant parties.[3]

A second fur trading and supply center grew up in Taos in what is today New Mexico. This trade attracted numerous French Americans from Louisiana and some French Canadian trappers, in addition to Anglo-Americans. Some New Mexican residents also pursued the beaver trade, as Mexican citizens initially had some legal advantages. Trappers and traders in the Southwest covered territory that was generally inaccessible to the large fur companies. It included parts of New Mexico, Nevada, California and central and southern Utah. After the decline in beaver and the fur trade, with some emigrants to the West using the Mormon Trail, former trappers found work as guides and hunters for the traveling parties.

After the short-lived American Pacific Fur Company was sold, the British controlled the fur trade in the Pacific Northwest, under first the North West Company and then the Hudson's Bay Company. To prevent American fur traders from competing, the British companies adopted a policy of destroying fur resources west of the Rocky Mountains, especially in the upper Snake River country. After the Hudson's Bay Company took over operations in the Pacific Northwest in 1821, the Snake River country was rapidly trapped out.[4]

The stereotypical mountain man has been depicted as dressed in buckskin and a coonskin cap, sporting bushy facial hair and carrying a Hawken rifle and Bowie knife, commonly referred to as a "scalpin' knife." They have been romanticized as honorable men with their own chivalrous code, loners who would help those in need but who had found their home in the wild.[citation needed]

Most trappers traveled and worked in companies. Their typical dress combined woolen hats and cloaks with serviceable Indian-style leather breeches and shirts. Mountain men often wore moccasins, but generally carried a pair of heavy boots for rough terrain. Each mountain man also carried basic gear, which could include arms, powder horns and a shot pouch, knives and hatchets, canteens, cooking utensils, and supplies of tobacco, coffee, salt, and pemmican. Items (other than shooting supplies) that needed to be "at hand" were carried in a "possibles" bag. Horses or mules were essential, in sufficient number for a riding horse for each man and at least one for carrying supplies and furs.

In summer, mountain men searched for fur animals, but they waited until autumn to set their traplines. They sometimes worked in groups. Several men would trap, others would hunt for game, and one would remain in camp to guard the camp and be a cook. Since there were always Indians in the areas where they trapped, trappers had to deal with each tribe or band separately. Some tribes were friendly, while others were hostile.[citation needed] Mountain men traded with friendly tribes and exchanged information. Hostile tribes were avoided when possible.[citation needed]

The life of a mountain man was rugged. They explored unmapped areas. Bears and hostile tribes presented constant physical dangers. Mountain men had to use their senses of hearing, sight, and smell to keep themselves alive. When they were sick, they would use whatever herbs they had to try to get well. If game was scarce, they would go hungry. In summer they could catch fish, build a log cabin, and roam in search of fur. Cabins were built near friendly Indians. But in other areas, most camps were just temporary. Most winters were brutal. Heavy snow storms or extremely low temperatures keep men in their cabins. But no matter what the season, there was always danger. Many men did not last more than several years in the wilderness.

With the exception of coffee, their food supplies generally duplicated the diet of native tribes in the areas where they trapped. Fresh red meat, fowl, and fish were generally available. Some plant foods, such as fruit and berries, were easy for the men to harvest. They traded with the tribes for prepared foods, such as processed roots, dried meat, and pemmican. In times of crisis and bad weather, mountain men were known to slaughter and eat their horses and mules.[citation needed]

A free trapper was a mountain man who, in today's terms, would be called a free agent. He was independent and traded his pelts to whoever would provide him with the best price. This contrasts with a "company man," typically in debt to one fur company for the cost of his gear, who traded only with them (and was often under the direct command of company representatives). Some company men who paid off the debt could become free traders using the gear they had earned. They might sell to the same company when the price was agreeable/convenient. 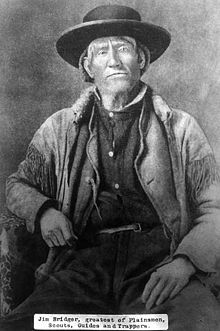 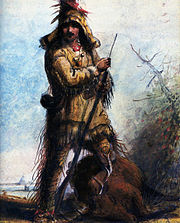