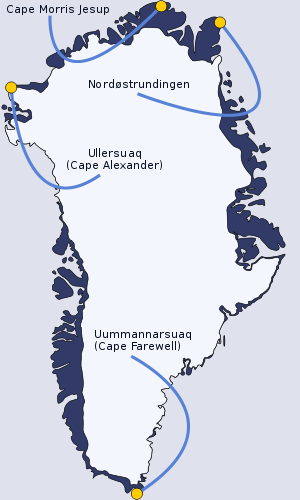 Nordøstrundingen amongst the extreme points of Greenland

Nordostrundingen (corrupted from Danish: Nordøstrundingen), is a headland located at the northeastern end of the island of Greenland. At 11°19'W it is the most easterly point of land in both the Americas (North and South America). Nordøstrundingen is actually further east than the westernmost point in Europe, on western Iceland.

Greenland is not part of North America politically, which led some people to believe that the most easterly point of the continent was the easternmost point in Canada − Cape Spear located at 52°37'W near St. John's, Newfoundland. However, both of these headlands are actually located on islands associated with North America, and thus neither is located on the continent itself.