Dog food
For the corporate practice of using one's own products, see Eating your own dog food.

Not to be confused with Dog meat, which covers human consumption of canines.

Dog food refers to food specifically intended for consumption by dogs. Though technically omnivorous, dogs exhibit a natural carnivorous bias, have sharp, pointy teeth, and have short gastrointestinal tracts better suited for the consumption of meat. In spite of this natural carnivorous design, dogs have still managed to evolve over thousands of years to survive on the meat and non-meat scraps and leftovers of human existence and thrive on a variety of foods.

In the United States alone, dog owners spent over $8.5 billion on commercially manufactured dog food in 2007.[1] Some people make their own dog food, feed their dogs meals made from ingredients purchased in grocery or health-food stores or give their dogs a raw food diet.

Before the advent of commercially made pet foods, most dogs lived off of grains, meats, table scraps and homemade food from their owners. It wasn’t until the mid-1800’s that the world saw its first food made specifically for dogs. An American electrician, James Spratt concocted the first dog treat. Living in London at the time, he witnessed dogs around a ship yard eating scraps of discarded biscuits. A light bulb went off in his head and shortly thereafter he introduced his dog food, made up of wheat meals, vegetables and meat. By 1890 production had begun in the United States and became known as "Spratt's Patent Limited".

Canned horse meat was introduced in the United States under the Ken-L-Ration brand after WWI as a means to dispose of deceased horses. The 1930’s saw the introduction of canned cat food and dry meat-meal dog food by the Gaines Food Co. By the time WWII ended, pet food sales had reached $200 million. In the 1950s Spratt's became part of General Mills. For companies such as Nabisco, Quaker Oats, and General Foods, pet food represented an opportunity to market by-products as a profitable source of income. [2]

There are many varieties of commercial dog food to choose from.

Most store-bought dog food comes in either a dry form (also known in the US as kibble) or a wet canned form. Dry food contains 6-10% moisture by volume, as compared to 60-90% in canned food. Semi-moist foods have a moisture content of 25-35%. Pet owners often prefer dry food for reasons of convenience and price. Although dry food can be left out for long periods of time, pet owners typically portion control and feed their pets fresh food twice a day, as they would with wet food.[citation needed]

Wet or canned dog food is significantly higher in moisture than dry or semi-moist food.[3] Because canned food is commercially sterile (cooked during canning); other wet foods may not be sterile. A given wet food will often be higher in protein or fat compared to a similar kibble on a dry matter basis (a measure which ignores moisture); given the canned food's high moisture content, however, a larger amount of canned food must be fed. Grain gluten and other protein gels may be used in wet dog food to create artificial meaty chunks, which look like real meat.[4]

In recent years, new types of dog food have emerged on the market that differ from traditional commercial pet food. Many companies have been successful in targeting niche markets, each with unique characteristics.[5] A non-alcoholic "beer" for dogs (Kwispelbier) is made in the Netherlands from beef extract and malt.[6]

Many commercial dog foods are made from materials considered by some authorities and dog owners to be unusable or undesirable.[9] These may include:

Less expensive dog foods generally include less meat, and more animal by-products and grain fillers. Proponents of a natural diet criticize the use of such ingredients, and point out that regulations allow for packaging that might lead a consumer to believe that they are buying natural food, when, in reality, the food might be composed mostly of ingredients such as those listed above.[10][11] More expensive dog foods may be made of ingredients suitable for organic products or free range meats. Ingredients must be listed by amount in descending order.

According to the Association of American Feed Control Officials (AAFCO), animal by-products in pet food may include parts obtained from any animals which have died from sickness or disease provided they are rendered in accordance to law. As well, cow brains and spinal cords, not allowed for human consumption under federal regulation 21CFR589.2000 due to the possibility of transmission of BSE, are allowed to be included in pet food intended for nonruminant animals.[12] In 2003, the AVMA speculated changes might be made to animal feed regulations to ban materials from “4-D” animals – those who enter the food chain as dead, dying, diseased or disabled.[13] 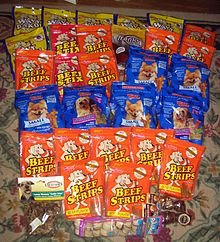 Dog treats are special types of dog food given as a reward, not as a staple food source.

Supporters of raw feeding believe that the natural diet of an animal in the wild is its most ideal diet and try to mimic a similar diet for their domestic companion. They are commonly opposed to commercial pet foods, which they consider poor substitutes for raw feed. Opponents believe that the risk of food-borne illnesses posed by the handling and feeding of raw meats would outweigh the purported benefits and that no scientific studies have been done to support the numerous beneficial claims. The Food and Drug Administration of the United States states that they do not advocate a raw diet but recommends owners who insist on feeding raw to follow basic hygienic guidelines for handling raw meat to minimize risk to animal and human health.[14]

In the United States, dog foods labeled as "complete and balanced" must meet standards established by the Association of American Feed Control Officials (AAFCO) either by meeting a nutrient profile or by passing a feeding trial. The Dog Food Nutrient Profiles were last updated in 1995 by the AAFCO's Canine Nutrition Expert Subcommittee. The updated profiles replaced the previous recommendations set by the National Research Council (NRC).

Critics argue that due to the limitations of the trial and the gaps in knowledge within animal nutrition science, the term "complete and balanced" is inaccurate and even deceptive. An AAFCO panel expert has stated that "although the AAFCO profiles are better than nothing, they provide false securities."[15]

Certain manufacturers label their products with terms such as premium, ultra premium, natural and holistic. Such terms currently have no legal definitions. There are also varieties of dog food labeled as "human-grade food". Although no official definition of this term exists, the assumption is that other brands use foods that would not pass US Food and Drug Administration inspection according to the Pure Food and Drug Act or the Meat Inspection Act.

The ingredients on the label must be listed in descending order by weight before cooking. This means before all of the moisture is removed from the meat, fruits, vegetables and other ingredients used. 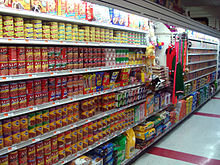 Dog food at a supermarket in Brooklyn, New York.

The 2007 pet food recalls involved the massive recall of many brands of cat and dog foods beginning in March 2007. The recalls came in response to reports of renal failure in pets consuming mostly wet pet foods made with wheat gluten from a single Chinese company, beginning in February 2007. After more than three weeks of complaints from consumers, the recall began voluntarily with the Canadian company Menu Foods on March 16, 2007, when a company test showed sickness and death in some of the test animals.

Overall, several major companies have recalled more than 100 brands of pet foods, with most of the recalled product coming from Menu Foods. Although there are several theories of the source of the agent causing sickness in affected animals, with extensive government and private testing and forensic research, to date, no definitive cause has been isolated. As of April 10, the most likely cause, according to the FDA, though not yet proven, is indicated by the presence of melamine in wheat gluten in the affected foods.

In the United States, there has been extensive media coverage of the recall. There has been widespread public outrage and calls for government regulation of pet foods, which had previously been self-regulated by pet food manufacturers. The economic impact on the pet food market has been extensive, with Menu Foods losing roughly $30 Million alone from the recall. The events have caused distrust of most processed pet foods in some consumers.

In 1999, another fungal toxin triggered the recall of dry dog food made by Doane Pet Care at one of its plants, including Ol’ Roy, Wal-Mart’s brand, as well as 53 other brands. This time the toxin killed 25 dogs.[16]

A number of common human foods and household ingestibles are toxic to dogs, including chocolate solids (theobromine poisoning), onion and garlic (thiosulphate, sulfoxide or disulfide poisoning[18]), grapes and raisins, macadamia nuts, as well as various plants and other potentially ingested materials.[19][20] Green tomatoes should be avoided in a dog's diet because they contain tomatine, which is harmful to dogs. As the tomato ripens and turns red the tomatine disappears, and the tomato become safe for the dog to eat. The tomato plant itself is toxic.