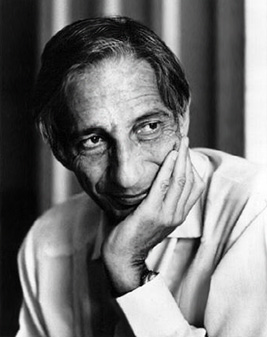 Ivan Illich (pronounced|ɪˈvɑn ˈɪlɪtʃ [See [http://inogolo.com/pronunciation/d96/Ivan_Illich inogolo:pronunciation of Ivan Illich] .] ) (, &ndash; , ) was an n philosopher and anarchist social critic. He authored a series of critiques of the institutions of contemporary western culture and their effects of the provenance and practice of education, medicine, work, energy use, and economic development. Illich has been called the intellectual father of Web 2.0 and Wikipedia. In 1971 Illich imagined a world where people learned mostly from each other rather than from experts and where information would be available everywhere anytime—in railway stations, factories, cafes, hospitals everywhere.

Illich was born in Vienna to a n father and - mother and had Italian, French and German as native languages.

He wrote a dissertation focusing on the historian and would return to that subject in his later years. In 1951, he was assigned as an assistant parish priest in

In 1961, Illich founded the (CIDOC, or Intercultural Documentation Center) at in , ostensibly a research center offering language courses to missionaries from North America and volunteers of the program

After ten years, critical analysis from the CIDOC of the institutional actions by the Church brought the organization into conflict with the Vatican. Illich was called to Rome for questioning, due in part to a report from the .

In the 1970s, Illich was popular among leftist intellectuals in France, his thesis having been discussed in particular by . However, his influence declined after the 1981 election of as he was considered too pessimistic at a time when the took control of the government.

In the 1980s and beyond, Ivan Illich traveled extensively, mainly splitting his time between the , Mexico, and . He held an appointment as a Visiting Professor of Philosophy, Science, Technology and Society at . He also taught at the .

During his later years, he suffered from a cancerous growth on his face that, in accordance with his critique of professionalized medicine, was treated with traditional methods. He regularly smoked opium to deal with the pain caused by this tumor. At an early stage, he consulted a doctor about having the tumor removed, but was told that there was too great a chance of losing his ability to speak, and so he lived with the tumor as best he could. He called it "my mortality."Fact|date=December 2007

The book that brought Ivan Illich to public attention was "Deschooling Society" (1971), a critical discourse on education as practised in "modern" economies. Full of detail on then-current programs and concerns, the book's core assertions and propositions remain as radical today as they were at the time. Giving real-world examples of the ineffectual nature of institutionalized education, Illich posited self-directed education, supported by intentional social relations, in fluid, informal arrangements:

The book is more than a critique -- it contains positive suggestions for a reinvention of learning throughout society and throughout every individual lifetime. Particularly striking is his call (in 1971) for the use of advanced technology to support "learning webs."

"Tools for Conviviality" (1973) was published only two years after "Deschooling Society". In this new work Illich generalized the themes that he had previously applied to the field of education: the institutionalization of specialized knowledge, the dominant role of technocratic elites in industrial society, and the need to develop new instruments for the reconquest of practical knowledge by the average citizen. Illich proposed that we should "invert the present deep structure of tools" in order to "give people tools that guarantee their right to work with independent efficiency." [Ivan Illich, Tools for Conviviality (1973) ISBN 0-06-080308-8 ISBN 0-06-012138-6]

"Tools for Conviviality" attracted world-wide attention. A resume of it was published by French social philosopher in "", under the title "Freeing the Future." [