A barrel roll is an aerial maneuver in which an airplane makes a complete rotation on its longitudinal axis while following a helical path, approximately maintaining its original direction. It is sometimes described as "a combination of a loop and a roll". The G-force is kept positive (but not constant) on the object throughout the maneuver, commonly between 2-3 G, and no less than 0.5 G.[1]

The barrel roll is so named because an aircraft executing this maneuver looks as though it were flying with its wheels running along the inside edge of a barrel. A more common modern visualization is to imagine an airplane trying to fly in a horizontal corkscrew around the line of the direction of travel.

In aviation, the maneuver includes a constant variation of attitude in all three axes, and at the midpoint (top) of the roll, the aircraft is flying inverted, with the nose pointing at a moderate angle to the general path of flight. The term "barrel roll" is frequently used, incorrectly, to refer to any roll by an airplane (see aileron roll). Most often, a barrel roll refers to a helical roll around the relative forward motion of the aircraft, in which the nose ends up pointed along the flight path. It is performed by doing a combination of a roll and a loop.[2]

Outside of aerobatic competition, the Boeing 367-80 and Concorde prototype were barrel rolled during testing. The Boeing 367-80 was rolled twice by Tex Johnston in an unauthorized maneuver while demonstrating the aircraft to the International Air Transport Association over Lake Washington, Seattle. The Concorde was rolled multiple times by her test pilots, including Jean Franchi and Brian Walpole.[3]

To do a barrel roll from the pilot's perspective, it may best be thought of as a roll around a point on the horizon that is 45 degrees off the flightpath.[4] Starting from a level flight, the pilot will usually pick such a point on the horizon as a reference. The pilot will then pull back on the stick, bringing the plane up into a brief climb. As the nose passes through the horizon, the pilot begins to apply aileron input, which is accomplished by easing the stick to either the right or the left. As the airplane rolls it will continue to pitch upward. The pilot will need to control the roll rate, keeping the nose 45 degrees off the reference point on the horizon as the plane rolls around this spot. Some planes may require rudder input, while most high powered planes will only need to be guided by aileron and elevator control.[5][6]

When the aircraft has rolled 90 degrees, and the wings are vertical, the nose should be pitched about 45 degrees directly above the reference point on the horizon. As the plane continues to roll upside-down it will begin to level out, and the horizon will appear to rise to meet the nose. When in the completely inverted position, the aircraft should be level and the nose should still be 45 degrees to the side of the reference point, putting it 90 degrees off of the original flightpath. As the nose drops through the horizon, the pilot may need to reduce the elevator pressure, to counter-act the force of gravity and the loss of lift. Still keeping the nose 45 degrees off the reference point, the plane should roll into level flight along the same flightpath and at the same altitude at which the maneuver began.[6]

In air combat maneuvering, historically known as dogfighting, a barrel roll may refer to one of many maneuvers. These maneuvers are often simply called barrel rolls, but many fall into the category of "displacement rolls."

The term barrel roll, by itself, most often refers to a helical roll around a straight flight path, the purpose of which is to slow the relative forward motion of the aircraft. This can help a defender to force an attacker, who is usually behind the defender, to fly out in front, called overshooting. This can also help an attacker to prevent an overshoot. This often forces both planes to continue through a series of rolls known as a rolling scissors maneuver. A barrel roll is also often used to check blind spots while remaining on a steady flight path. 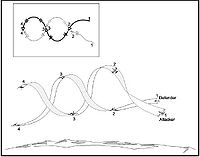 The rolling scissors, also called vertical scissors or simply "rollers," is usually an undesirable maneuver to be caught in, both for the attacker and the defender. The advantage usually goes to the aircraft with the higher turn rate, especially when pulling the nose through the top and bottom of the turns. Correct placement of the lift vector during the maneuver is crucial to keep from moving ahead, relative to the opponent. There are many optical illusions that affect the pilot's ability to determine the relative position of the opponent, and mistakes can easily be made. It is extremely difficult to get a suitable firing solution during the rolling scissors. If the aircraft have a thrust-to-weight ratio of less than one, each consecutive roll will be lower than the previous, and the pilots can quickly find themselves at ground level. Any advantage is usually lost by the first pilot that attempts to disengage.[7]

A high g barrel roll is a last ditch defensive maneuver, performed when the attacker has achieved a suitable firing solution. The maneuver is performed when the attacker is very close, and a barrel roll performed by the defender may cause an overshoot. The maneuver begins by cutting the throttle, extending the speed brakes, or turning very hard to encourage an overshoot. The maneuver is then executed by applying hard rudder input during the barrel roll to assist with the roll. The sudden change in the relative forward speed may cause a surprised attacker to fly out in front of the defender. Depending on the situation, a high g barrel roll can be performed "over the top," by beginning the roll like a normal barrel roll. The roll can also be performed "underneath," by doing a half aileron roll into the inverted position and beginning the barrel roll while upside-down.[8]

By moving the fighter more into the vertical plane, the pilot can use gravity to assist the aircraft in turn performance. In vertical or oblique geometric planes, the turn will be much slower over the top, but the turn radius will be much smaller. Conversely, the turn radius will be much larger through the bottom of the turn, but the turn rate will be faster.[9] Displacement rolls make full use of this assistance provided by gravity. By moving the fighter into more of the vertical plane, the pilot can then control the roll rate and yaw to provide a sharp reduction in turn radius, helping the attacker to prevent an overshoot and remain inside of the defender's turn.[10]

A canopy roll is the simplest form of displacement roll. The roll is used to provide lateral displacement while maintaining the original heading. The maneuver begins like a normal barrel roll, but when the plane is nearly inverted, the pilot places the elevators and ailerons close to the neutral position. Called "unloading," this allows the inverted aircraft to fly momentarily in a fairly straight arc. When the pilot has achieved enough lateral displacement, the pilot continues through the second half of the barrel roll.

A lag displacement roll, or "lag roll," helps improve the firing position of the attacking aircraft, and helps to increase range. The attacker performs the roll during a hard, turning chase, rolling both up and away from the turn. Typically performed a little slower than a normal displacement roll, the attacker achieves the proper reduction in turn radius on, or just outside of the defender's turn. Upon completing the roll, when the aircraft's lift vector points directly at the enemy, the pilot pulls back on the stick, reentering the turn with the ability to achieve a better firing position.[12][13][14]

The maneuver is performed when an overshoot is imminent and cannot be corrected with a normal displacement roll. Much more aggressive than a normal displacement roll, the maneuver begins by rolling slightly toward the direction of the defender's break, and then pulling up sharply. At roughly 30 degrees from the horizon, the pilot begins the barrel roll away from the defender's break, applying more elevator pressure than roll. When inverted, the pilot then uses the assistance provided by gravity combined with rudder control to bring the fuselages of both aircraft into alignment. As the nose passes through the horizon, the pilot will then align the lift vector ahead of the defender, to bring the fighter back into the correct geometric plane, inside of the defender's turn.[16]

The success of a barrel roll attack depends greatly on the aircraft's ability to zoom climb.[16] As the attacker is coming down, the defender may counter by pulling up unto a barrel roll, resulting in a rolling scissors.[7]