The mellophone is a brass instrument that is typically used in place of the horn (sometimes called a French horn) in marching bands or drum and bugle corps.

Owing to its use primarily outside of concert music, there is not much solo literature for the mellophone, other than that used within drum and bugle corps.

The present-day mellophone has three valves, operated with the right hand. Mellophone fingering is identical to that of a trumpet. Mellophones are typically pitched in the key of E-flat or F. The overtone series is an octave above that of the F horn, exactly like playing the lower portion of a horn in F. Many drum and bugle corps, however, use mellophones pitched in G, although the number has dwindled somewhat since the two major United States drum and bugle corps circuits (first Drum Corps International and then Drum Corps Associates) passed rule changes allowing use of bell-front instruments in any key (although corps using mellophones pitched in G typically have the whole of their brass section also using G instruments, whereas those using mellophones pitched in F generally have the remainder of their brass section using B♭). G Mellophones play much more like Flugelhorns and Trumpets and share the same overtone series. The F Mellophones are much closer to an F horn in playstyle.

The direction of the bell, as well as the much-reduced amount of tubing (as compared to a concert horn) makes the mellophone look like a large trumpet. In fact, many mellophones use trumpet-style parabolic ("cup") mouthpieces rather than the smaller, lighter, conical ("funnel") mouthpieces used on concert (French) horns. Most Drum Corps playing on G horns use V-cup Cornet style mouthpieces. When using a horn mouthpiece, an adapter is commonly used so that it fits in the lead pipe of the mellophone. However, use of a "cup" mouthpiece results in a more trumpet-like sound, when compared with the horn-like sound produced from a "funnel" mouthpiece, but it also shares the same characteristics of a flugel horn

A distinction must be made between:

Mellophones are more directly related to bugle-horns such as the flugelhorn, euphonium, and tuba. Their design is more radically conical than horns, producing a sound generally considered more suitable for martial music; a mellophone tends to be easier to articulate sharply as is required by martial music. In rare instances mellophones (usually old ones) have been made shaped like horns, but newer instruments are almost always built as bugle-shaped marching horns. A mellophone shaped as a concert horn is built with piston valves and with the bell facing the left, in reverse of the traditional horn.

Difference from the horn

The marching mellophone is used in place of the horn for marching because it is a bell-front instrument allowing projection of the sound in the direction that the player is facing. This is especially important in drum corps and marching bands because the audience is typically standing or sitting on only one side of the band. There are also marching B♭ horns with a bell-front configuration; mellophones also are usually constructed with a smaller bore for louder volume than marching horns. Marching B♭ horns do use a horn mouthpiece and have a much more horn-like sound, but are much more difficult to play on the field.

Another factor in the greater use of mellophones is its ease of use as compared to the considerable difficulty of playing a concert horn consistently well. In a horn, the length of tubing (and the bore size) make the partials much closer together than other brass instruments in their normal range and therefore harder to play accurately. The F mellophone has tubing half the length of a horn which gives it an overtone series more similar to a trumpet or most other brass instruments. This compromises much of the range and tone that horns are famous for, but eliminates the accuracy problems encountered while marching.

C. G. Conn developed the 16E "Mellophonium" which was embraced by bandleader Stan Kenton, who appeared in Conn's advertising in 1957. Contrary to popular legend, Kenton himself was not involved in the design of the Mellophonium. The new instrument was used by Kenton to "bridge the gap" in tonalities between his trumpet and trombone sections. Kenton used a four-man Mellophonium section between 1961 and 1963 on 11 albums. 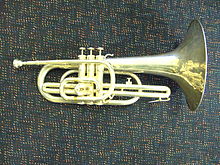 The Vincent Bach Corporation also produced a mellophonium, with the coils of piping more reminiscent of the cornet.