Byker Grove was a British television series which aired between 1989 and 2006 and was created by Adele Rose. The show was broadcast at 5.10pm after Newsround (later moved to 5pm) on CBBC on BBC One. It was one of the very few television series to air on CBBC that was aimed at an older teenager and young adult audience as it tackled some controversial storylines.

The show ran between 1989 and 2006, and was set in a youth club in the Byker district of Newcastle upon Tyne, England. Byker Grove was the original idea of late TV executive Andrea Wonfor. In 1987, Andrea approached veteran soap writer Adele Rose. Together they created a single pilot episode featuring kids aged 8–11 at an out-of-school club (transmitted on Tyne Tees TV in 1988). In autumn 1988, Andrea got backing from Anna Home, then Head of drama, BBC TV. Anna gave the green light for a run of a series of six 25-minute episodes on BBC TV. The age of the main characters was raised to 12-16 after support from first producer-director, Matthew Robinson. The first series therefore centred on young teenagers crossing the bridge from childhood to adulthood. Although some of the action took place outside the youth club, the series was unusual among dramas in that the characters were rarely shown in school. One of the major settings was the foster home run by the kindly but strict Lou Gallagher, the longest-running character.

Byker Grove launched the careers of Anthony McPartlin ("P.J.") and Declan Donnelly ("Duncan") who are otherwise known as Ant & Dec as well as the actress Jill Halfpenny, Donna Air, former CBBC presenter Andrew Hayden-Smith and Emmerdale actors Dale Meeks, Charlie Hardwick and Victoria Hawkins. Also appearing in the series was the now glamour model Francoise Boufhal ("Ellie Baines"). Founder producer/director (1989–95) was Matthew Robinson who, after Byker Grove, became executive producer of EastEnders, Head of Drama BBC Wales and now runs Khmer Mekong Films in Cambodia. It was also home to writers such as Catherine Johnson (who went on to pen Mamma Mia, the ABBA musical) and Matthew Graham (This Life, Doctor Who and co-creator of BBC One's Life on Mars). The first writer was Adele Rose - in Series 1 she wrote eps 1, 2, 3, 4 and 6, her daughter, Carrie Rose, writing ep 5 - and the most prolific was Brian B. Thompson, who wrote 50 episodes over 12 series. Tom Hooper directed four episodes of the show in 1997[1]. Charlie Hunnam now stars in American TV series Sons of Anarchy. 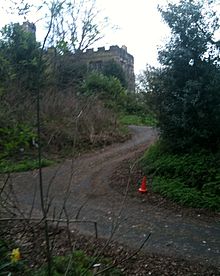 The Mitre, also known as Benwell Towers, acted as the production offices and the fictional youth club.

Byker Grove was not filmed in the Byker area of Newcastle. The actual youth club set was in Benwell, which is in the west area of the City, Byker being in the east. Byker Metro station (the suburban rail network in Newcastle and the Tyne & Wear area) and other landmarks in the real Byker (such as the famous architecture that is the Byker Wall and surrounding estate) are used for filming backdrops.

The "youth club" building which is what the viewers see onscreen, known as The Mitre used to be a nightclub and a pub (which was mentioned in a few storylines from episodes in the late 90s) before it was bought by Zenith Television, who film the series. The building housed the actual set, production offices, make up suite and costume department. Currently the property is semi-vacant, and the Zenith North Television signs have been removed outside the building.

The final series started on 7 October 2006 on the CBBC Channel. Richard Deverell, head of CBBC, was interviewed on Newsround about the decision to axe Byker Grove.[2]

The eighteenth and last series of Byker Grove was produced by Tim Holloway, who also produced Casualty from 2000 until 2002.

On 11 March 2008, it was reported that Gallowgate Productions TV, the TV production company owned by Ant McPartlin and Declan Donnelly, purchased the rights to Byker Grove after the production company that made it (Zenith Entertainment) went bankrupt in 2007. According to reports, the reason Ant & Dec decided to purchase the rights was to stop a digital channel showing repeats featuring the duo during their time in the series, though this has neither been confirmed or denied by the duo themselves.[3]

Until Series 10 (1998) the rival youth club was known as Denton Burn. In Series 13 (2001) rival youth club members were known as the Denwell Burners as they were from a youth club in Denwell Burn. This is a fictitious area of Newcastle upon Tyne, the name coming from a mixture of Benwell and Denton Burn. The leader of the gang was Dave Richmond, a local drug dealer from Whitley Bay, his trademark act of violence was the "Whitley Smile."

Filming for Denwell Burn Youth Club for Series 15 was filmed at Raby Street Youth Club, in the buildings next to Byker Primary School. This is, ironically, the real youth club for the children of Byker. In Series 16 (2004), a different youth club, Jesmond Grange (pejoratively referred to by the Grovers as 'Jezzie Grange'), became a new rival to the Grove.

There have been several youth leaders working at the Grove over the years. The following is a list of all the ones shown onscreen.

Byker Grove has tackled some controversial subjects such as drug addiction, child abuse, homelessness, teen pregnancy and abortion. In November 1994, Byker Grove became the first British drama to broach the subject of coming out when Noddy Fishwick kissed his close friend Gary Hendrix at the back of a cinema. This scene caused outrage in the British tabloids, a Sun editorial calling for producer Matthew Robinson to be sacked. However the BBC strongly backed the storyline which received countrywide support from gay teenagers, many teachers and parents. The 2004 series saw the character of Bradley agonising over his sexuality and eventually coming out as gay to his girlfriend Sadie, after a romantic holiday together had failed to live up to their expectations.

The series frequently depicts life as unjust, with bad things happening to good people. One of the most shocking episodes is when P.J. is blinded in a paintball accident. It is one of many tragedies to befall Byker Grove characters through the years. Others include Jemma Dobson being electrocuted by a faulty electricity mains socket, Flora's death from a brain tumour, Greg's fall from the roof of the Grove which left him paralysed from the waist down, youth leader Geoff Keegan's death in an accidental gas explosion, and the latest tragedy, Ben Carter being knocked down and fatally injured by a car driven by Craig on the Quayside.

The bands of Byker Grove

A number of Musical acts have been spun off from the series, these include:

Other bands with links to Byker Grove include: