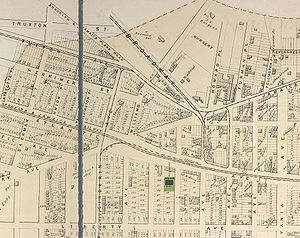 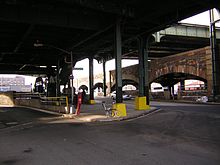 By 1878, local Atlantic Avenue rapid transit trains began stopping at a new station, Manhattan Beach Railroad Crossing, at the New York and Manhattan Beach Railway crossing at Van Sinderen Avenue. This later became the main East New York station, with only these local trains stopping at Howard House.[4] The Atlantic Avenue Improvement, completed in 1905, resulted in the closing of the Howard House station, and the expanded Manhattan Crossing station was renamed East New York. The elevated Warwick Street station, 18 blocks east, was also labeled as serving East New York;[5] it closed in 1939, when the elevated railway east of East New York was buried in the current tunnel.[citation needed]

East New York was also a station on the New York and Manhattan Beach Railway, now the Bay Ridge Branch, from its opening in July 1877 until May 1924, when passenger service on the branch ended. It was initially at grade level where the lines crossed, but was placed in a tunnel in 1915; the platforms, under East New York Avenue, still exist. Until the 1930s, a grade-level freight connection existed in the southeast quadrant between the two lines.[6]