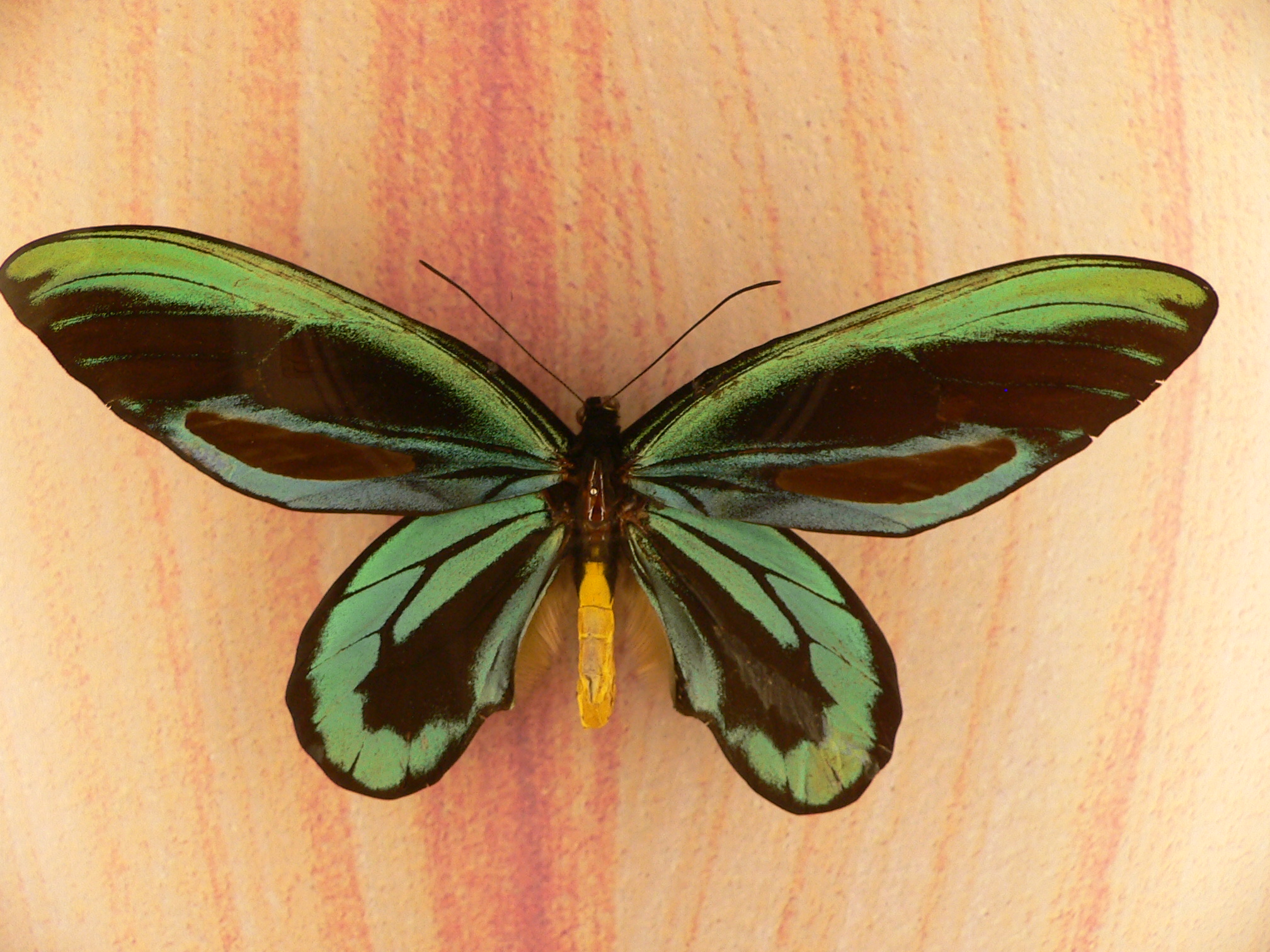 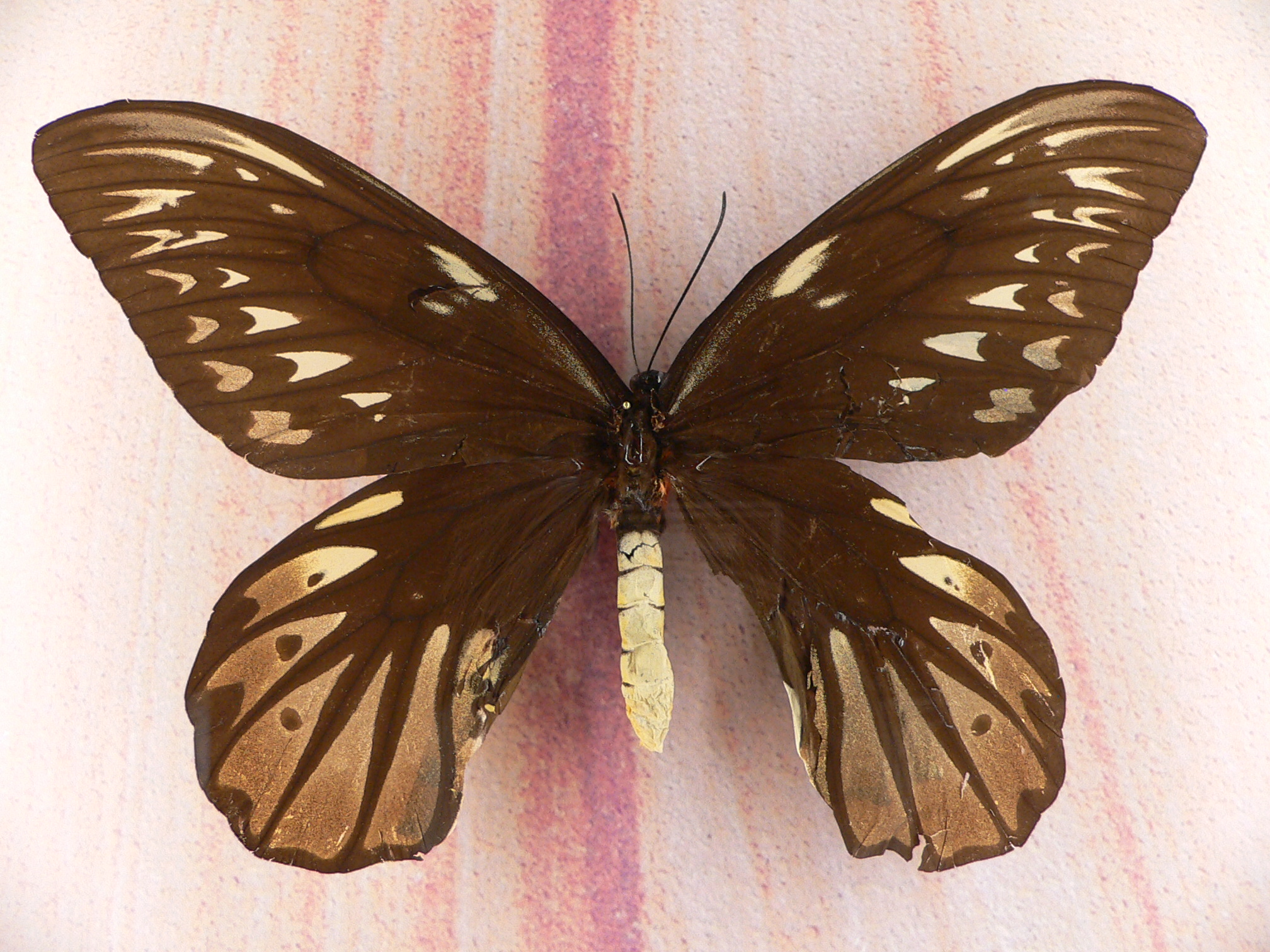 Queen Alexandra's Birdwing ("Ornithoptera alexandrae") is the largest in the world.

The species was named by Lord Walter Rothschild in 1907, in honour of Queen Alexandra, wife of King . The first European to discover the species was in 1906, a collector employed by Lord Walter Rothschild to collect natural history specimens from Papua New Guinea. Although the first specimen was taken with the aid of a small shotgun, Meek soon discovered the early stages and bred out most of the first specimens. It is restricted to the forests of in eastern .

Though most authorities now classify this species in the genus "", it has formerly been placed in the genus "" or "Aethoptera". In 2001 the Gilles Deslisle proposed placing it in its own subgenus (which some writers have treated as a genus); he originally proposed the name "Zeunera", but this is a junior homonym (with "Zeunera" Piton 1936 [Orthoptera] ), and his replacement is "Straatmana". [Deslisle, G. (2007) "Straatmana : a remplacement name for the subgenus Zeunera Deslisle 2001 (Lep. Papilionidae)" "Lambillionea" (Brussels) N° 2 vol 1 & 2, June 2007, p. 238]

Female Queen Alexandra's Birdwings are larger than males with markedly rounder, broader wings. The female can reach a of 31cm (>14 inches), a body length of 8 cm (3.2 inches) and a body mass of up to 12 grams (0.42 oz), all enormous measurements for a butterfly. The female has brown wings with white markings and a cream-colored body with a small section of red fur on its thorax. Males are smaller than females with brown wings that have iridescent blue and green markings and a bright yellow abdomen. The wingspan of the males is approximately 20 cm, but more usually about 16 cm. A spectacular form of the male is form "atavus", which has gold spots on the hind wings.

Larvae of this species feed on pipe vines of the genus "" (family ""), including "P. dielsiana" and "P. schlecteri". They feed initially on fresh foliage of the hostplants and ultimately ringbark the vine before pupating. Plants of the "Aristolochiaceae" family contain aristoloic acids in their leaves and stems. This is believed to be a potent vertebrate poison and is accumulated by larvae during their development. Adults feed at flowers providing a broad platform for the adults to land on, including .

The female Queen Alexandra’s Birdwing lays about 27 eggs during its entire lifespan; this estimate was made by Ray Straatman by dissecting adult females. Newly emerged larvae eat their own eggshells before feeding on fresh foliage. The larva is black with red tubercles and has a cream-colored band or saddle in the middle of its body. The larvae always ringbark the host vine before moving onto adjacent leaves or vines to become a pupa, which is golden yellow or tan in colour with black markings. Male pupae may be distinguished by a faint charcoal patch on the wing cases; this becomes a band of special scales in the adult butterfly called a sex brand. The time taken for this species to develop from egg to pupa is approximately six weeks, with the pupal stage taking a month or more. Adults emerge from the pupae early in the morning while humidity is still high, as the emormous wings may dry out before they have fully expanded if the humidity drops. The adults may live for three months or more and have few predators, excluding large Orb Weaving spiders ("Nephila" spp.) and some small birds.

The adults are powerful fliers most active in the early morning and again at dusk when they actively feed at flowers. Males also patrol areas of the host plants for newly emerged females early in the morning. Females may be seen searching for host plants for most of the day. Courtship is brief but spectacular; males hover above a potential mate, dousing them with a to induce mating. Receptive females will allow the male to land and pair, while unreceptive females will fly off or otherwise discourage mating. Males are strongly territorial and will see off potential rivals, sometimes chasing small birds as well as other birdwing species. Flight is usually high in the rainforest canopy, but both sexes decend to within a few meters of the ground while feeding or laying blue eggs.

The Queen Alexandra’s Birdwing is considered by the [IUCN2006|assessors=Gimenez Dixon|year=1996|id=15513|title=Ornithoptera alexandrae|downloaded=11 May 2006 Listed as Endangered (EN B1+2c v2.3)] , being restricted to approximately 100 square kilometres of coastal rainforest near , Oro Province, Papua New Guinea. It is nonetheless abundant locally and requires old growth rainforest for its long term survival. The major threat for this species is habitat destruction for plantations. However, it must be noted that the eruption of nearby in the 1950s destroyed a very large area of this species' former habitat and is a key reason for its current rarity.

The species is also highly prized by collectors, with illegally traded specimens selling for thousands of dollars. Although collectors are often implicated with the decline of this species, habitat destruction is the main threat. Early collectors, frustrated by the height at which adults fly during the day, often used small shotguns to down specimens. but because collectors demand high quality specimens for their collections, most specimens are bred from larvae or pupae.

The species is listed as an endangered under Appendix I of CITES, completely restricting its sale.