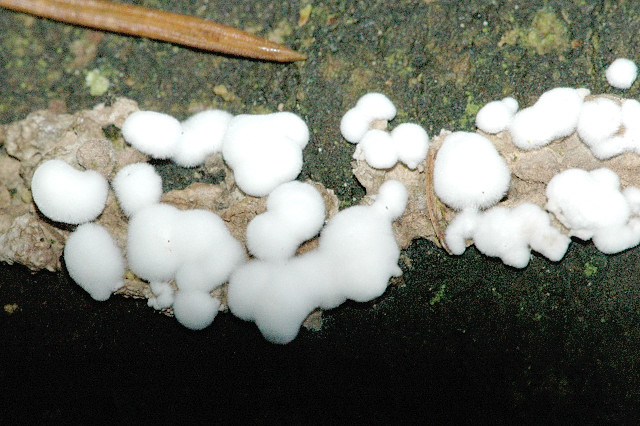 "Myxomycota" is a phylum of the Kingdom related to s. The name comes from the Greek "Myxo", meaning "slime", and mycota, meaning . They are also known as the or slime molds.

Some would also consider "myxomycota" as a kingdom unto itself, with an unsettled phylogeny because of conflicting molecular and developmental data.

When a "Myxomycota" spore germinates, it cracks, releasing an amoeba-like cell called a myxamoeba. The myxamoeba moves like an amoeba, and ingests food via . Its food can include s and nonliving organic matter. The myxamoeba will divide as it eats. When two myxamoeba of different mating strains (of different populations) find each other, they will merge, forming a . The zygote itself will not divide, but rather it will grow as its nucleus divides, forming a large, multinucleate cell called a plasmodium. The plasmodium will continue to consume organic matter through phagocytosis. After some time, the plasmodium will travel to an open area and convert into a spore-bearing structure called a . Spores will be released.

"Myxomycota" can form s that , fuse, form a , , and return to l or swarm cell stages. The "Myxomycota" themselves are , and can switch between and forms. The fuse into a , which then becomes a , which can produce fruit-like .