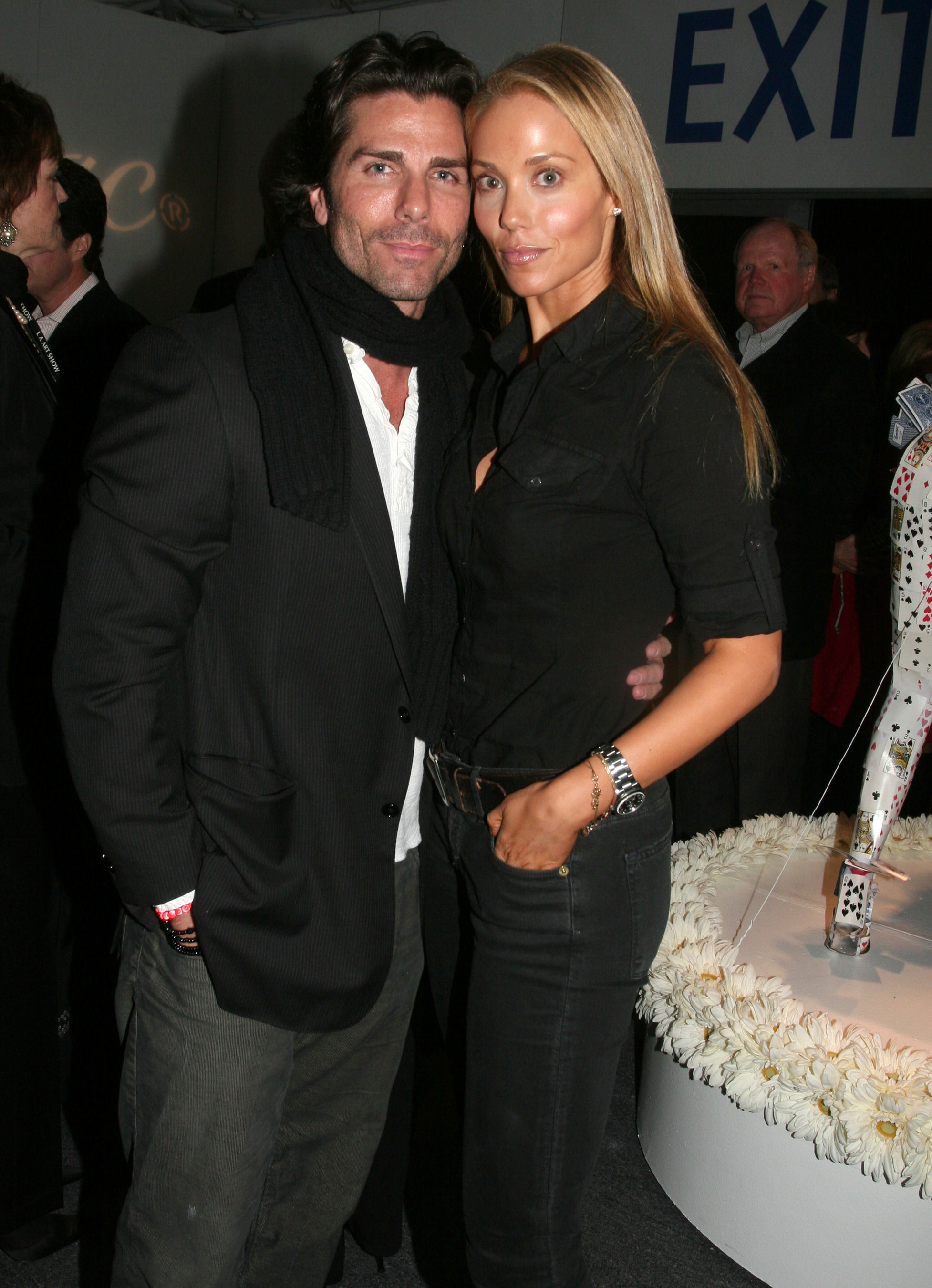 Elizabeth Berkley was born in Farmington Hills, a suburb in Oakland County, , and she grew up in . Berkley is ish of German and Greek descent.Fact|date=August 2008 She attended the , and she graduated in 1990. From a young age, she excelled in dancing, and she practiced every day in a dance room that her parents constructed for her in the basement of their house. In 1982, at the age of only eight, she auditioned for the lead role in the film "Annie", but she was turned down because she was too tall. [ [http://www.imdb.com/title/tt0083564/trivia Annie (1982) - Trivia ] ] As her love for dancing increased, she became more interested in pursuing it professionally, even traveling to New York to train with other dancers and top choreographers. [ [http://www.youtube.com/watch?v=vQpZfuN1Xek YouTube - Elizabeth Berkley - SIUAD - Get To Know [Part 1 ] ] She began to take part in several ballets, including and, in 1983, she starred in some musicals. [ [http://www.askmen.com/women/actress_150/150_elizabeth_berkley.html Elizabeth Berkley - AskMen.com ] ]

Berkley was a teen model for Elite before pursuing an acting career. [ [http://www.eonline.com/celebrities/profile/index.jsp?uuid=0db259dc-bd68-46ea-a655-db370a8c67f7 Elizabeth Berkley - Profile, Latest News and Related Articles ] ] She made her screen debut in 1987 with a role in the TV movie "Frog" and following this, made a number of guest appearances on several television shows. In 1989, at the age of fifteen [http://vidcol.hostsnake.com/elizabeth%20berkley/] , she auditioned for the role of Kelly in "", but the producers of the show could not decide whether to cast her or . In the end, they created the character of Jessie, a smart high school girl and committed feminist, especially for Berkley and she played her from 1989 to 1993 as well as in both of the show's TV movie installments. Berkley's performance received praise within the industry and she was nominated for the for Best Young Actress Starring in an Off-Primetime or Cable Series two years in a row, but did not win. The show was so successful that the six main cast members - including Berkley - were immortalized in form when a 12 inch was made of each character. Nowadays, the dolls are very and sell for much more than they did at the time of their original production and release. [ [http://www.geocities.com/savedbythebellcollectibles/jessie.html Jessie Doll ] ]

After leaving "Saved by the Bell" to try and break into , Berkley auditioned for and won (beating various other young actresses including , , and , then relative unknowns) the role of Nomi Malone, the lead character in the infamous 1995 film "". The sex and -laden movie was given a controversial NC-17 rating in the United States (the first big budget film that was deliberately intended to receive this rating), was a box office bomb, was widely panned by critics, and is generally credited with ruining Berkley's movie career.

Following the failure of "Showgirls" and being awarded two Razzie awards for her performance in the film, she decided to audition for smaller roles in quality films, hoping to improve upon her acting skills before accepting another leading role. As a result, she appeared in a small role in "", a comedy starring , , and , before accepting the title role in the straight to video "" which also starred . She then played a Madonna body double named Tina in the "" and was prominently featured in the theatrical poster and subsequently on the DVD cover as well. [http://www.postersnthings.com/posters/real_blonde.jpg]

As time has put distance between Berkley and the infamous film (which has since achieved cult status among film fans and placed number 36 on 's list of the Top 50 Cult Movies and is also one of top 20 highest grossing movies of all time for MGM) [ [http://www.mgm.com/title_title.php?title_star=SHOWGRLS MGM.com : Official website of Metro-Goldwyn-Mayer Inc. - Ars Gratia Artis ] ] she has performed well in strong supporting roles in independent movies such as "The Taxman", "", "Roger Dodger" (which her manager advised her not to do), and "". She also had a small role as a hired by 's character in 's sports drama "", as well as a key supporting role in 's "".

Berkley appeared on stage opposite for her role as Honey in the stage version of "Lenny". She went on to make her Broadway debut in the comedy "", opposite in February 2004, just three months after her marriage to . She replaced as Bonnie in the 2005 production of 's "", appearing alongside , , and .

Berkley received much praise for her role in "Hurlyburly", with Charles Isherwood of "" even going as far as apologizing to her for his past criticisms of her ability, stating that the fact she held "her own among this skilled company of scene-stealers is a testament to how much her talent has grown". [ [http://www.nytimes.com/2005/06/19/theater/newsandfeatures/19ishe.html The Redemption of Elizabeth Berkley - New York Times ] ] Her most recent stage appearance was at the sixth annual 24 Hour Plays alongside , , and , in which six writers, six directors, twenty-four actors, and production crews have twenty-four hours to write, direct, and perform six ten-minute plays. [ [http://query.nytimes.com/gst/fullpage.html?res=9D05EED71131F931A1575AC0A9609C8B63&scp=7&sq=Elizabeth+Berkley&st=nyt Arts, Briefly; Jennifer Aniston In Broadway's '24 Hours' - New York Times ] ]

She has been seen in many dramatic television roles, guest starring on series such as ', "", "", "Threshold", and '. However, she stayed true to her comic roots with a recurring role in the successful and critically acclaimed sitcom "Titus", in which she played the title character's sister, Shannon. She also starred in the Lifetime TV movie "", in which she played Christie Dawson, a high school teacher wrongfully accused of by one of her students who becomes obsessed with her. [ [http://www.mylifetime.com/on-tv/movies/student-seduction Student Seduction | myLifetime.com ] ] This was followed by another made-for-television movie in 2007, entitled "Black Widow" in which she played a woman suspected of killing her husbands for their money. The film "Meet Market", which she starred in along with , , and was released straight to DVD in 2008 after having been in limbo since it was completed in 2004.

In 2008, Berkley signed on to star in a multi-episode arc of "", in which she plays Horatio Caine's () ex-lover, Julia Winston, who is also the mother of his recently discovered son. [cite news | title = Berkley signs for role on "CSI: Miami" | url = http://www.reuters.com/article/televisionNews/idUSN2633121520071126 | publisher = Reuters | date = 2007-11-26 | first = Nellie | last = Andreeva] The episodes which Berkley appeared in were very highly rated and all of them featured in the top 10 Nielsen ratings chart. [ [http://tvbythenumbers.com/2008/04/01/top-cbs-primetime-shows-march-24-30/3151 Nielsen TV Ratings Top CBS Shows, March 24-30, 2008; including CSI:Miami, Two and A Half Men and 60 Minutes ] ] She has since appeared in the show's season six finale and has confirmed that she will be returning for season seven in the fall. [ [http://www.youtube.com/watch?v=cwEG-LeQt1c Youtube - Chelsea Lately Plays Game With Elizabeth Berkley ] ]

She is the host of Bravo's reality series, "", a competition featuring the exploits of ten wannabe dancers who compete against each other to win a cash prize of $100,000 as well as the opportunity to work with and perform for some of the country's top choreographers. [ [http://www.bravotv.com/Step_It_Up_And_Dance/season/1/about/index.php BRAVOtv.com : Step it Up and Dance : About ] ]

During the press tour for "Step It Up and Dance", Berkley appeared on various shows including various morning news programs, ABC's "", 's "The Sauce", 's "", 's "", and ABC's "". While on "The View", she spoke of her admiration for co-host , calling her "an extraordinary being". Her appearance on the show was unique in that she brought the ladies of the show tap shoes and taught them a short dance routine. This soon resulted in being bleeped when she cried "Not too fast, I don't want to trip over my tits." [ [http://www.watchingtheview.com/the-view-april-18th-recap-laurence-fishburne-and-elizabeth-berkley/ Watching The View » Blog Archive » The View April 18th Rec

Berkley starred alongside in the directed short film "" which premiered at Mann's Chinese Theater in Los Angeles in June 2008. She has been cast (along with original star and "" star ) in the sequel to cult hit "", "", which is scheduled for release in 2009 and is currently being filmed in . She will play Trudy, a former drug addict turned born again Christian who becomes infatuated with her .

In July 2008, it was confirmed that Berkley will star in a multi-episode arc of the Showtime series "", during its sixth and final season in 2009. She will play the straight girl that got away from ' character in college. Berkley and Beals are best friends in real life, having previously worked on the 2002 "Roger Dodger".

Aside from acting, Berkley is well known for her long curly hair (especially during "" and "") and the fact that she has a rare condition called , in that her eyes are two different colors. Her right eye is half green and half brown while her left eye is green.

Following the failure of "", she decided to attend college to distance herself from acting, graduating from UCLA in the late '90s, with a B.A. degree in . Following this, she entered the and resumed her acting career. She later commented that her experience of the film and of her being made a scapegoat for the movie's failure was "definitely a cruel time" but also that it helped her "find out" what she "was made of".

She is a committed activist and in 1997, donned a $600 form-fitting gown made entirely of for the "Lettuce Be Lean" campaign, sponsored by PETA to try and encourage people to embrace . [http://www.peta.org/pdfs/berkleyveg.pdf] In 2008, she was among a number of celebrities to be nominated for Sexiest Vegetarian of the Year. [ [http://www.peta2.com/outthere/o-sexyveg08.asp peta2 // Out There // Who's the World's Sexiest Vegetarian 2008? ] ]

She is best friends with another actress who also famously starred in a -written film, , who starred in "" in 1983 and the pair appeared together in the 2002 independent movie "Roger Dodger". [ [http://movies.about.com/library/weekly/aarogerdodgerinta.htm Jennifer Beals Interview-Roger Dodger Movie ] ]

In 2000, she was made the subject of a $45 million when and Roger Wilson took action against , claiming that DiCaprio had encouraged his friends to assault Wilson in a street fight after he tried to defend Berkley, who had been the subject of DiCaprio and his friends' unwanted advances. [ [http://news.findlaw.com/court_tv/s/20030507/07may2003145047.html Did Leo DiCaprio lead his posse to war? ] ]

On , , she married and occasional at the Esperanza Hotel in , . The pair met during a dance class in 2000 and soon formed a close relationship. The entire wedding party (including Berkley and Lauren) was garbed in creations by Greg's uncle, fashion designer . Berkley wore a silk sheath dress with pearled spaghetti straps while Lauren wore a white tuxedo jacket and a black bow tie. At the wedding, she and Lauren danced a routine choreographed by the teacher of the dance class in which they met. Berkley formally changed her name to Elizabeth Berkley Lauren, however, she still uses her maiden name professionally. [ [http://www.lovetripper.com/bridalstars/wedding-database/elizabeth-berkley-lauren.html Elizabeth Berkley and Greg Lauren Wedding ] ]

She volunteers in her free time, working with teen girls in junior high and high schools around the world. She is active in various outreach programs such as dance classes for young teens, volunteer work with the elderly, and volunteer work for the Elizabeth Glaser Pediatric AIDS Foundation. [http://www.ask-elizabeth.com/#bio]

In 2006, after her husband commented on the amount of girls who came to her asking for advice and joked that she should have her own column, she decided to take action and created her own website to help teen girls. The website, which she facilitates herself is a self-esteem program called "". She regularly meets with young girls to discuss different issues and topics and to help them with any problems that they are going through and speaks of her own troubles in the past. [ [http://www.ask-elizabeth.com/ Ask-Elizabeth™ - Elizabeth Berkley Lauren, ©2006 All Rights Reserved ] ]

She is developing her own production company, named 5,6,7,8 Productions and hopes to use it for various projects both as an actress and producer. [ [http://video.bravotv.com/player/?fid=29651#videoid=226127 The Final Five | Videos | Step It Up And Dance ] ]