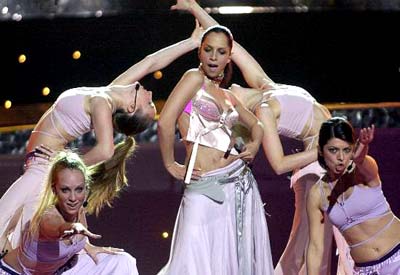 Sertab Erener (born , ) is a Turkish and also a cross-over soprano with a register as high as High-F. She is one of the most successful female Turkish pop singers in her homeland, and is considered one of the divas of . In Europe, she is best known for winning the Eurovision Song Contest 2003 with her hit song "", although she has had many other achievements outside Turkey.

A native of , Erener studied music in a university in the city before beginning her musical career working with Turkish pop singer .

She released her first album, "Sakin Ol", in 1992, and followed it with four more Turkish-language albums over the next decade. Her album "Lal" was included by in its "Soundtrack For A Century" collection.

After competing unsuccessfully in two National Finals (1989 and 1990) she finally won the Eurovision Song Contest 2003, representing Turkey with the song , co-written by . The song went on to top charts in countries all over Europe, including and .

In 2005, Erener released a Turkish-language album named "Aşk Ölmez", promoted with songs such as "Aşk Ölmez, Biz Ölürüz" ("Love Doesn't Die, We Do") and "Satılık Kalpler Şehri" ("City of Hearts For Sale"). She also appeared on the movie soundtrack album of 's "", with a lauded rendition of Madonna's song "Music".

On October 22 2005, Erener appeared on , a competition to choose the best Eurovision song of all time, performing the final verse and chorus of "Everyway That I Can". The song finished ninth in a field of fifteen. At the same event Erener revealed she was to release another English language album.

On March 15 2007 Sertab released a best of album. In addition to her Eurovision winner song, "The Best of Sertab Erener" features samples from the singer's extensive repertoire with songs in Spanish, Greek and English and duets with other singers.

Erener has sung s with , , and Greek singer Mando. She has also worked with musicians , , and band Voice Male.