The Nine Worthies are nine historical, scriptural and legendary personages who personify the ideals of chivalry as were established in the Middle Ages. All are commonly referred to as 'Princes' in their own right, despite whatever true titles each man may have held. In French they are called Les Neuf Preux, meaning "Nine Valiants",[1] which term gives a slightly more focused idea of the sort of moral virtue they were deemed to represent so perfectly, that of soldierly courage and generalship. The study of the life of each would thus form a good education for the aspirant to chivalric status. In Italy they are i Nove Prodi. The Nine Worthies comprise:

The thirteenth century carving "Nine Good Heroes" (known as "Neun Gute Helden" in the original German) at City Hall in Cologne, Germany is the earliest known representation of the Nine Worthies. From left to right are the three Christians, Charlemagne bearing an eagle upon his shield, King Arthur displaying three crowns and Godfrey of Bouillon with a dog laying before him, then the three pagans, Julius Caesar, Hector and Alexander the Great bearing a griffon upon the his shield, and lastly the three Jews, David holding a sceptre, Joshua and Judas Maccabeus. 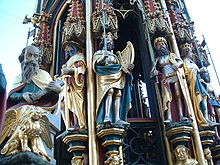 Statues of the Nine Worthies on the Schöne Brunnen (beautiful fountain) in Nuremberg (1385-1396). Visible on the fountain, l to r are: Judas Maccabeus, David (with harp), Julius Caesar, Alexander. The figure in the left foreground, St Mark, with his lion, is part of another group

They were first described in the early fourteenth century, by Jacques de Longuyon in his Voeux du Paon (1312).[2] Their selection, as Johan Huizinga pointed out, betrays a close connection with the romance genre of chivalry. Neatly divided into a triad of triads, these men were considered to be paragons of chivalry within their particular tradition: be it Pagan, Jewish, or Christian. Longuyon's choices soon became a common theme in the literature and art of the Middle Ages and earned a permanent place in the popular consciousness. The medieval "craving for symmetry"[3] engendered female equivalents, the neuf preuses, who were sometimes added, though the women chosen varied. Eustache Deschamps selected "a group of rather bizarre heroines"[4] selected from fiction and history, among them Penthesilea, Tomyris, Semiramis. Literature and suites of tapestry featured the full complement of eighteen, whose allegorical figures preceded King Henry VI of England in his triumphal royal entry to Paris, 1431.[5] A "tenth worthy"[6] was added by Deschamps, in the figure of Bertrand du Guesclin, the Breton knight to whom France owed recovery from the battles of Crécy (1346) and Poitiers (1356). Francis I of France still occasionally paraded himself at court dressed in the "antique mode" to identify himself also as one of the Neuf Preux.[7]

As a group, the nine worthies represents all facets of the perfectly chivalrous warrior. All, with the exception of Hector and arguably Arthur, are conquering heroes. Those not royal came from knightly families, it was thought. All lived in the pre-heraldic era and attributed arms were invented for them, as in Lucas van Leyden's engraving. All brought glory and honor to their nations and were noted for their personal prowess in arms. As individuals, each displayed some outstanding quality of chivalry which made them exemplars of knighthood. That the nine individual figures were generally not distinguished, iconographically, with respect to relative antiquity or ethnicity, would suggest that the virtues that they manifest are to be understood as timeless and universal.

Lucas van Leyden's depiction of the three Old Testament kings as exotic contemporaries, in an engraving of c. 1520 depicting the Worthies in three sections

The Nine Worthies comprise a triad of triads as follows:

The Nine Worthies were also a popular subject for masques in Renaissance Europe. In William Shakespeare's play Love's Labour's Lost the comic characters attempt to stage such a masque, but it descends into chaos. (The list of Worthies actually named in the play include two not on the original list, Hercules and Pompey the Great, as well as Alexander, Judas Maccabaeus, and Hector.) Don Quixote evokes the Nine Worthies in Volume I, Chapter 5, telling a peasant (who is trying to get him to admit who he is) "I know that I may be not only those I have named, but all the Twelve Peers of France and even all the Nine Worthies, since my achievements surpass all that they have done all together and each of them on his own account."[8]

Montacute House has sculptures of the nine worthies spaced along the upper eastern façade on the exterior of the long gallery piers. These figures are dressed in Roman armour.

In the late fourteenth century, Lady Worthies began began to accompany the Nine Worthies, though usually not individualized and shown as anonymous Amazon-styled warriors. In later years, nine of the "Most Illustrious Ladies of All Ages and Nations" were chosen from scripture, history and legend to be placed along side their male counterparts, though the choices for the Lady Worthies were not standardized and often varied by region, author and artist. 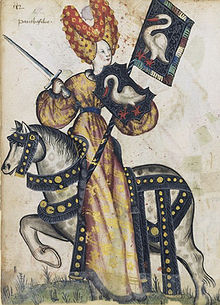 Penthesilea as one of the Lady Worthies.

Eustache Deschamps to the neuf preux adds neuf preuses (women), including Penthesilea, Tomyris and Semiramis. Together with their male counterparts, they precede Henry VI as he enters Paris in 1431, and figure in Le Jouvencel (1466). The list of preuses was however less fixed, and not always structured in pagan, Jewish and Christian triads. Thomas III of Saluzzo[11] has: Deiphille, Synoppe, Hippolyte, Menalyppe, Semiramis, Lampetho, Thamarys, Theuca, Penthésilée.

A very fine set of Siennese fifteenth century panel paintings, attributed to the Master of the Griselda Legend and others, now incomplete and widely dispersed, showed male and female worthies - the remaining paintings were reunited in a 2007 exhibition at the National Gallery, London.[12]

In the German Renaissance, Hans Burgkmair made a set of six woodcuts, each showing three of the "Eighteen Worthies". In addition to the usual males, his prints showed the Pagan Lucretia, Veturia and Virginia, the Jewish Esther, Judith and Jael, and the Christian Saints Helena, Bridget of Sweden and Elizabeth of Hungary. Burgkmair was in touch with Augsburg Renaissance Humanist circles, who may have helped choose the group. Apart from Veturia, mother of Coriolanus, who tried to save Rome from defeat by her son, the other pagan two were examples of chastity, responsible for no heroic acts except their defence of their own virtue. In contrast, two of the Jewish women, Judith and Jael, are known for their personal assassination of leaders opposed to Israel. Judith carries a sword in one hand and Holofernes's severed head in the other, and Jael carries the mallet with which she hammered a peg in the head of Sisera. The "Power of Women" and female violence was an interest of German artists at the time, and both Lucas van Leyden and Albrecht Altdorfer made prints of Jael in the act.

The Christian trio of saints, all very popular in Germany at the time, are all women who had been married - Bridget became an abbess as a widow. In addition, like three of the male worthies, Elizabeth of Hungary was an ancestor of Burgkmair's patron Maximilian I, Holy Roman Emperor, and Helena was a Roman Empress. Unlike the other two groups, who all face each other, apparently in conversation, these three all look down, and may illustrate the female virtue of silence.[13] Burgkmair's conception was not very widely followed.