Sardine
"Pilchard" redirects here. For other uses, see Pilchard (disambiguation).
This article is about the fish. For the children's games, see Sardines (game).

Sardines, or pilchards, are several types of small, oily fish related to herrings, family Clupeidae.[1] Sardines are named after the Mediterranean island of Sardinia, around which they were once abundant.[2]

The terms sardine and pilchard are not precise, and what is meant depends on the region. The United Kingdom's Sea Fish Industry Authority, for example, classifies sardines as young pilchards.[3] One criterion suggests fish shorter in length than 6 inches (15 cm) are sardines, and larger ones pilchards.[4] The FAO/WHO Codex standard for canned sardines cites 21 species that may be classed as sardines;[5] FishBase, a comprehensive database of information about fish, calls at least six species "pilchard", over a dozen just "sardine", and many more with the two basic names qualified by various adjectives.

Sardines are rich in nutrients. They are commonly sold canned, but fresh sardines are often grilled, pickled or smoked.

Sardines are rich in omega-3 fatty acids, which reduce the occurrence of cardiovascular disease.[6] Recent studies suggest that regular consumption of omega-3 fatty acids reduces the likelihood of developing Alzheimer’s disease.[7] These fatty acids may also help lower blood sugar levels a small amount.[8] They are also a good source of vitamin D, calcium, B12, and protein.[9]

Because they are low in the food chain, sardines are very low in contaminants, such as mercury, relative to other fish commonly eaten by humans.[10]

Commercial use of sardines

Sardines are commercially fished for a variety of uses: for bait; for immediate consumption; for drying, salting, or smoking; and for reduction into fish meal or oil. The chief use of sardines is for human consumption, but fish meal is used as animal feed, while sardine oil has many uses, including the manufacture of paint, varnish and linoleum.

The most important gear is an encircling net, particularly the purse seine. Many modifications of encircling nets are used, including traps or weirs. The latter are stationary enclosures composed of stakes into which schools of sardines are diverted as they swim along the coast. The fish are caught mainly at night, when they approach the surface to feed on plankton. After harvesting, the fish are submerged in brine while they are transported to shore.

Sardines are canned in many different ways. At the cannery, the fish are washed, their heads are removed, and the fish are cooked, either by deep-frying or by steam-cooking, after which they are dried. They are then packed in either olive, sunflower or soybean oil, water, or in a tomato, chilli or mustard sauce.

An open sardine can

Canned sardines in supermarkets may actually be [[Sprattus|sprat] (such as the “brisling sardine”) or round herrings. Fish sizes vary by species. Good quality sardines should have the head and gills removed before packing.[5] They may also be eviscerated before packing (typically the larger varieties). If not, they should be purged of undigested or partially digested food or feces by holding the live fish in a tank long enough for them to empty their digestive systems.[5]

Sardines are typically tightly packed in a small can which is scored for easy opening, either with a pull tab (similar to how a beverage can is opened), or a key, attached to the side of the can. Thus, it has the virtues of being an easily portable, nonperishable, self-contained food. The close packing of sardines in the can has led to their metaphorical use of the name in describing any situation where people or objects are crowded together, for instance, in a bus or subway car. It has also been used as the name of a children's game, where one person hides and each successive person who finds the hidden one packs into the same space until there is only one left out, who becomes the next one to hide.[11]

Sardines are a prominent prop in Michael Frayn's farce Noises Off.

Fishing for sardela or sardina (Sardina pilchardus) on the coasts of Dalmatia and Istria began thousands of years ago. The region was part of the Roman Empire, then largely a Venetian dominion, and has always been sustained through fishing mainly sardines. All along the coast, many towns promote the age-old practice of fishing by lateen sail boats for tourism and on festival occasions. Today, industrial producers continue this tradition. Currently, there are four factories of canned sardines: in Rovinj, Zadar, Postira and in Sali (the latter founded in 1905).

Sardine fishing and canning is a traditional industry in Brittany, where most French canneries remain. The area is known as the place where sardine canning was invented. Douarnenez was the world's leading sardine exporter in the 19th century. The sardines are fried, dried, and then canned (this traditional process is labelled préparées à l'ancienne), whereas in most other countries, processing consists of steam cooking after canning.

The sardine is a favorite food of the Keralites and the people of Andhra Pradesh, Tamil Nadu and coastal Karnataka. The fish is typically eaten fresh, and canned sardines are not popular. Fried sardines are a much sought-after delicacy. They are called mathi (Malayalam: മത്തി) or chalai (Malayalam: ചാള) in Tamil Nadu and Kerala. In Andhra Pradesh they are called "Kavallu" amongst the fishing community. People from coastal Karnataka call them pedvo or bhootai. Sardines are cheaper in India than larger fish like seer or pomfret, making them a low cost delicacy. They are consumed in various forms, including deep-fried and pan-fried preparations, or made into curries of various types.

Morocco is the largest canned sardine exporter in the world and the leading supplier of sardines to the European market. Sardines represent more than 62% of the Moroccan fish catch and account for 91% of raw material usage in the domestic canning industry. Some 600,000 tonnes of fresh sardines are processed each year by the industry. Famous Moroccan recipes include Moroccan fried stuffed sardines and Moroccan sardine balls in spicy tomato sauce.

Until the discovery of oil fields in the fishing areas, sardine canning was the main activity of the city of Stavanger. Today, only a sardine museum remains among the refineries in Stavanger.

Peru has a long history of direct human consumption of Engraulis ringens and other sardines, reaching into ancient cultures, including Chimú culture, Paracas culture, Pachacamac, and most importantly the oldest known civilization in the Americas, the Caral-Supe civilization, which was based almost completely on E. ringens consumption. Nonetheless, since the 1950s the overwhelming destination for captured E. ringens (anchoveta or Peruvian sardine) has been as the principal input for reduction fishery in the production of fishmeal and fish oil, with minuscule quantities destined for direct human consumption. Due to a combination of environmental and regulatory effects, since 2000, the Peruvian catch has ranged from 9.58 million metric tons (MT) to a low of 5.35 million MT, with the reported 2009 catch concluding at 5.35 million MT.[12] E. ringens - Catch 2000-2009 (Spanish) In recent years, direct human consumption (local and for export) has reached approximately 110,000 MT (about 2% of catch) due to evangelical promotion of health, environmental, and economic benefits, such as Mistura 2010, coupled with government and NGO activities, e.g. www.anchoveta.info, and private sector offers from local supermarkets.

Sardines play an important role in Portuguese culture. Historically a people who depend heavily on the sea for food and commerce, the Portuguese have a predilection for fish in their popular festivities. The most important is Saint Anthony's day, June 13, when Portugal's biggest popular festival takes place in Lisbon, where grilled sardines are the snack of choice. Almost every place in Portugal, from Figueira da Foz to Portalegre, from Póvoa de Varzim to Olhão, has the summertime tradition of eating grilled sardines (sardinhas grelhadas).

In the Timanfaya Volcanic National Park on Lanzarote in the Canary Islands, a popular tourist snack is freshly caught sardines grilled over the heat from a volcanic vent. On the Atlantic coast, fried sardines are commonly served as tapas with drinks or as the first course of a meal. On the Mediterranean coast, grilling is more common. 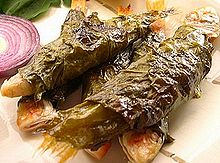 Sardines (sardalya in Turkish), a delicacy in Turkish cuisine, are very commonly found in fish markets throughout coastal western regions of Turkey. They are generally prepared grilled or steamed in ovens, most commonly served as a main course alongside alcoholic beverages, most notably rakı, the archetypal Turkish liqueur. Particularly in the Gallipoli peninsula (Turkish: Gelibolu Yarımadası) and in Aegean region of Turkey, sardines are oven-cooked rolled in grape leaves. 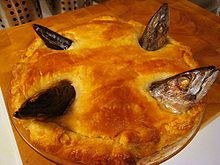 Pilchard fishing and processing was a thriving industry in Cornwall from around 1750 to around 1880, after which it went into an almost terminal decline. However, as of 2007, stocks are improving.[13] Since 1997, sardines from Cornwall have been sold as "Cornish sardines", and since March 2010, under EU law, Cornish sardines have Protected Geographical Status.[14]

The industry has featured in numerous works of art, particularly by Stanhope Forbes and other Newlyn School artists. A traditional Cornish pilchard dish is stargazy pie.