The École Polytechnique de Montréal is an engineering school/faculty affiliated with the University of Montreal (UdeM) in Montreal, Canada. It ranks first in Canada for the scope of its engineering research.[1] It is occasionally referred to as Montreal Polytechnic, although in Quebec English its French name is more commonly used. The school offers graduate and postgraduate training, and is very active in research. Following tradition, new bachelors of engineering (B. Eng.) graduating from the École Polytechnique receive an Iron Ring, during the Canadian Ritual of the Calling of an Engineer ceremony. 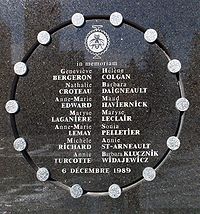 The École Polytechnique de Montréal (a reference to the famous École polytechnique in Paris) was founded in 1873 in order to teach technical drawing and other useful arts. At first, it was set in a converted residence. It later moved to a larger building on Saint-Denis street. In 1958, it moved to its current location on the Université de Montréal campus. The original building was enlarged in 1975 and then in 1989. In 2002, the Computer and Electrical Engineering Department (they were later separated) began to occupy the 5th and 6th floor of the old École des Hautes Études Commerciales de Montréal building. In 2003, the construction of three new buildings started.

Until the 1960s, the main purpose of the school was to train engineers. However, from 1959 on, the focus went to research. Nowadays, it is a leading research institution in applied sciences in Canada.

On December 6, 1989, it was the site of the École Polytechnique massacre, in which 14 women were killed by Marc Lépine. This event is commemorated by the Rose Campaign in an annual "Day of Action on Violence against Women". 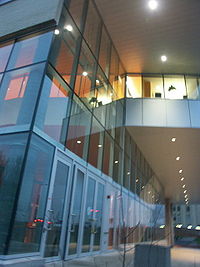 The school's campus is located on the northern face of Mount Royal. Its main building is the highest on campus. The J.-Armand-Bombardier building sits beside the main building and mainly serves for research activities and as an emergence centre for spin-off companies, designed to support the pre-startup of technology-based businesses. The building is named for Joseph-Armand Bombardier, the inventor of the snowmobile.

The Pierre-Lassonde et Claudette-Mackay-Lassonde building, home to the Electrical Engineering Department and Computer and Software Engineering Department, was inaugurated in September 2005. This new building won a "Award of Merit" from Canadian Architect magazine in 2003, received a Gold certification from the U.S. Green Building Council and scored 46 on the LEED points scale which was, at inauguration, the highest score ever obtained in Canada. The energy performance of the Lassonde buildings is 60% better than the standard set by the Model National Energy Code of Canada for Buildings.[2]

The École Polytechnique is one of the three largest engineering schools in Canada, and the largest one in the province of Quebec. Since its foundation in 1873, this French language educational establishment trains highly skilled engineers and specialists. The school contributes to the scientific and economic expansion of the region. Its graduates were part of most of Quebec's major engineering works of the 20th century such as the construction of hydroelectric dams. The École Polytechnique is in the forefront of engineering in many fields such as aeronautics, computer engineering, telecommunications, biotechnology, nanotechnology, environmental science, artificial intelligence, and many other high-end domains.[citation needed]

There are 13 undergraduate programs offered by 7 departments. Some are coop programs. Students can choose to specialize in the following disciplines:

The École Polytechnique is known for its dynamic research, which represented over 40% of its budget for the year 2008-2009 (60.5 million CAD research funding). Among the engineering faculties/schools in the Group of Thirteen, Ecole Polytechnique is leading the way in many areas of research: number of Canada Research Chairs (No. 1), total NSERC grants (No. 1), number of publications in engineering faculties in Canada (No. 5) and NSERC research grants in partnership with industry (No.1). Forty research units receive more than 20% of the funding and contracts for research in the area of applied science given to Quebec’s universities.

220 teachers and 150 researchers are part of the school's community. Well-known for the quality of the teaching, approximately 600 diplomas, 200 masters, and 50 doctorates are awarded each year.[5] 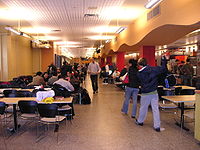 The school is well known for its vivid student life, including its theater group Poly-Théâtre and photo club (French) Poly-Photo. Many other groups are present, such as Allo-Poly (humor), Poly-TV, Polyrad, etc. The student newspaper, (French) Le Polyscope was Founded in 1967. It publishes weekly during the Quebec school year. It is known around the campus of the Université de Montréal for its irreverent humour, crosswords puzzles, Arts & Entertainment section and "you submit it, we'll publish it" policy. The École Polytechnique is famous around Montreal for its beach party, organised by a delegation of students known as Poly-Party. It takes place once every two years during winter (generally in January). Students build a complete "artificial beach" in the cafeteria, by putting loads of sand on the floor and assembling an interior water park with a large swimming pool.

Also, each year, the Poly-World student delegation goes to another country to learn and compare foreign engineering practices. This extracurricular activity helps participating students learn different cultural visions and helps them appreciate the different factors of global competitiveness in the engineering field.