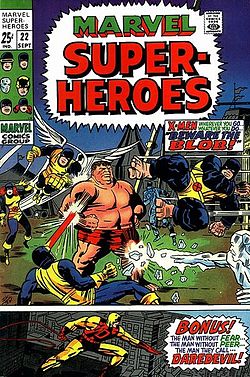 Marvel Super-Heroes is the name of several comic book series and specials published by Marvel Comics.

This summer special was a 25¢ "giant", relative to the typical 12¢ comics of the times.

The first ongoing series of this name began as Fantasy Masterpieces, initially a standard-sized, 12-cent anthology reprinting "pre-superhero Marvel" monster and sci-fi/fantasy stories. With issue #3 (June 1966), the title was expanded to a 25-cent giant reprinting a mix of those stories and Golden Age superhero stories from Marvel's 1940s iteration as Timely Comics. Fantasy Masterpieces ran 11 issues (Feb. 1966 - Oct. 1967) before being renamed Marvel Super-Heroes with #12 (Dec. 1967) 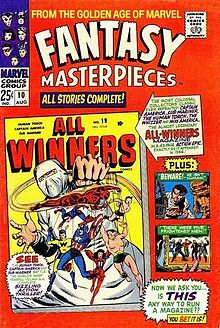 While continuing with the same mix of reprint material, this first volume of Marvel Super-Heroes also began showcasing a try-out feature as each issue's lead. This encompassed solo stories of such supporting characters as Medusa of the Inhumans, as well as the debuts of Captain Marvel (#12), the first appearance of Carol Danvers, later Ms. Marvel (#13), the Phantom Eagle (#16) and the Guardians of the Galaxy (#18).

Under either name, this series' Golden Age reprints represented the newly emerging comic-book fandom's first exposure to some of the earliest work of such important creators as Jack Kirby, Bill Everett, and Carl Burgos, and to such long-unseen and unfamiliar characters as the Whizzer and the Destroyer. Fantasy Masterpieces #10 (Aug. 1967) reprinted the entirety of the historic, full-length All-Winners Squad story from the (unhyphenated) All Winners Comics #19 (Fall 1946). Fantasy Masterpieces #11 (Oct. 1967) re-introduced the work of the late artist Joe Maneely, a star of 1950s comics who died young in a train accident.

A second series titled Fantasy Masterpieces ran from #1-14 (Dec. 1979 - Jan. 1981), reprinting truncated versions of the 1968 Silver Surfer series, and Adam Warlock stories from Strange Tales and The Power of Warlock.

The name itself reappeared, without a hyphen, as part of the title of a 12-issue, company-wide crossover miniseries Marvel Super Heroes Secret Wars (May 1984 - April 1985). The 1985-86 sequel was titled simply Secret Wars II.

In the mid-1980s, the Marvel UK series The Mighty World of Marvel was retitled Marvel Superheroes.

Next came the 15-issue Marvel Super-Heroes vol. 2 (May 1990 - Oct. 1993), published quarterly and which generally printed "inventory stories", those assigned to serve as emergency filler.

The final series of this title was the six-issue Marvel Super-Heroes Megazine (Oct. 1994 - March 1995), a 100-page book reprinting 1970s and 1980s Fantastic Four, Daredevil, Iron Man and Hulk stories in each issue.