Location of the Cinque Ports and their limbs.

The Confederation of Cinque Ports (pronounced "sink" ports, never as the French cinq) is a historic series of coastal towns in Kent and Sussex. It was originally formed for military and trade purposes, but is now entirely ceremonial. It lies at the eastern end of the English Channel, where the crossing to the continent is narrowest. The name originates in Norman French, meaning "five ports", which are:

Other towns also contribute to the confederation, including two Antient Towns, and seven Limbs.

The five ports are supported by two so called "Antient Towns" of:

whose councils traditionally maintained defence contingents for the realm of England.

Apart from the five ports and the two Antient Towns, there are seven other members of the Confederation, which are considered to be Limbs of the other towns. These are:

There are in addition some 23 towns, villages and offices which have varying degrees of connection to the ancient Liberties of the Cinque Ports. Pevensey was once a Limb of Hastings, and the coastal confederation during its mediæval period consisted of a confederation of 42 towns in all.[clarification needed]

History of the Ports

A Royal Charter of 1155 established the ports to maintain ships ready for the Crown in case of need. The chief obligation laid upon the ports, as a corporate duty, was to provide 57 ships for 15 days service to the king annually, each port fulfilling a proportion of the whole duty.[1] In return the towns received the following privileges:

That is to say:

Exemption from tax and tolls; self-government; permission to levy tolls, punish those who shed blood or flee justice, punish minor offences, detain and execute criminals both inside and outside the port's jurisdiction, and punish breaches of the peace; and possession of lost goods that remain unclaimed after a year, goods thrown overboard, and floating wreckage.

The leeway given to the Cinque Ports, and the turning of a blind eye to misbehaviour, led to smuggling, though of course common everywhere at this time becoming more or less one of the dominant industries.

A significant factor in the need to maintain the authority of the Cinque Ports by the King was the development of the Royal Navy. With the advance in shipbuilding techniques came a growth in towns such as Bristol and Liverpool and the wider development of ports such as London, Gravesend, Southampton, Chichester, Plymouth and the royal dockyards of Chatham, Portsmouth, Greenwich, Woolwich and Deptford. A further reason for the decline of many older ports may be ascribed to the development of the railway network across Britain, and the increased quantity of overseas trade it could distribute from the new major ports developing from the 18th century.

King Edward I of England granted the citizens of the Cinque Ports special privileges, including the right to bring goods into the country without paying import duties; in return the Ports would supply him with men and ships in time of war. The associated ports, known as 'limbs', were given the same privileges. The five head ports and two antient towns were entitled to send two Members to Parliament. A Lord Warden of the Cinque Ports was appointed, and also held the title of Constable of Dover Castle, and whilst this office exists today, it is now a purely honorary title, with an official residence at Walmer Castle. The town of Hastings was the head port of the Cinque Ports in mediæval times. The towns also had their own system of courts.

Barons of the Cinque Ports 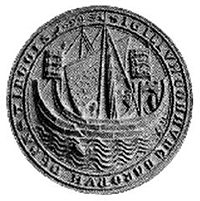 SIGILLUM COMMUNE BARONUM DE HASTINGUIS, common seal of the barons of Hastings. 2 standards can be seen flying from the ship: one showing the Plantagenet arms of 3 lions, the other seemingly showing 3 ships, which arms are combined by dimidiation in the arms of the Cinque Ports

All Freemen of the Ports, termed "Portsmen", were deemed in the age of Feudalism to be barons, and thus members of the baronage entitled to attend the king's parliament. Termed "Barons of the Cinque Ports", they reflected an early concept that military service at sea constituted land tenure per baroniam making them quasi feudal barons. The early 14th.c. treatise Modus Tenendi Parliamentum stated the Barons of the Cinque Ports to hold a place of precedence below the lay magnates but above the representatives of the shires and boroughs. Writs of summons to parliament were sent to the warden following which representative barons of the Cinque Ports were selected to attend parliament. Thus the warden's duty in this respect was similar to that of the sheriff who received the writs for distribution to the barons in the shires. The existence of common (i.e. communal) seals of the barons of the individual ports (see illustration) suggests they formed a corporation as the seal was designed to be affixed to charters and legal documents which would bind them as a single body.[2] This no doubt related to their privileges as monopolies. The warden and barons often experienced clashes of jurisdiction.[1] In the 21st.c. the title "Baron of the Cinque Ports" is now reserved for Freemen elected by the Mayor, Jurats, and Common Council of the Ports to attend a Coronation, at which they hold the canopy above a new monarch, and is solely honorary in nature.

As time went by and some ports declined or silted up, others were added. Rye and Winchelsea were attached to Hastings as "Antient Towns" in the 12th century, and later became members in their own right. The following "corporate limbs" were added in the 15th century: Lydd, Faversham, Folkestone, Deal, Tenterden, Margate and Ramsgate. Other places associated with the Cinque Ports and sometimes described as "non corporate limbs" included Bekesbourne, Birchington, Brightlingsea, Fordwich, Pevensey, Reculver, Seaford, Stonor and Walmer. At one time there were 23 limbs.

The continuing decline of the confederation of the Cinque Ports may be ascribed to a variety of different circumstances, but they were not so hampered by the raids from the Danes and the French to be removed by the numerous destructive impact of plagues, and survived the politics of the 13th century Plantagenets, and the subsequent War of the Roses.

Although by the 14th century the confederation faced wider challenges from a greater consolidation of national identity in the monarchy and Parliament, the legacy of the Saxon authority remained. Even after the 15th century, the 'antient towns' continued to serve with the supply of transport ships.

During the 15th century, New Romney, once a port of great importance at the mouth of the river Rother (until it became completely blocked by the shifting of sands during the great storm of 1287), was considered the central port in the confederation, and the place of assembly for the Cinque Port Courts, the oldest such authority being vested in the 'Kynges high courte of Shepway', which was being held from at least 1150. It was here that from 1433 The White (1433–1571) and Black (1572-1955) Books of the Cinque Port Courts were kept.

Much of Hastings was in the 13th century washed away by the sea. During a naval campaign of 1339, and again in 1377, the town was raided and burnt by the French, and went into a decline during which it ceased to be a major port. It had no natural sheltered harbour. Attempts were made to build a stone harbour during the reign of Elizabeth I, but the foundations were destroyed by the sea in storms.

New Romney is now about a mile and a half from the seafront. It was originally a harbour town at the mouth of the River Rother. The Rother estuary was always difficult to navigate, with many shallow channels and sandbanks. In the latter part of the thirteenth century a series of severe storms weakened the coastal defences of Romney Marsh, and the Great Storm of 1287 almost destroyed the town. The harbour and town were filled with sand, silt, mud and debris, and the River Rother changed course, now running out into the sea near Rye, Sussex. New Romney ceased to be a port.

Hythe is still on the coast. However, although it is beside a broad bay, its natural harbour has been removed by centuries of silting.

Dover is still a major port.

Ongoing changes in the coastline along the south east coast, from the Thames estuary to Hastings and the Isle of Wight inevitably reduced the significance of a number of the Cinque port towns as port authorities. However, ship building and repair, fishing, piloting, off shore rescue and sometimes even 'wrecking' continued to play a large part in the activities of the local community.

By the reign of Queen Elizabeth I, the Cinque Ports had effectively ceased to be of any real significance, and were absorbed into the general administration of the Realm. Local Government reforms and Acts of Parliament passed during the 19th and 20th Centuries (notably the Great Reform Act of 1832), have eroded the administrative and judicial powers of the Confederation of the Cinque Ports, when New Romney and Winchelsea were disenfranchised from Parliament, with representation provided through their Counties alone, while Hythe and Rye's representation was halved.

In 1985, HMS Illustrious established an affiliation with the Cinque Ports. In 2005, the affiliation was changed to HMS Kent. 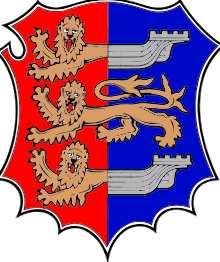 Coat of arms of Hastings

The distinctive heraldic emblem of the Cinque Ports is the front half of a lion joined to the back of a ship, seen in the coats of arms of several towns, and also in the heraldic banner (flag) of the Lord Warden of the Cinque Ports. This was originally created by heraldic dimidiation.[3]