Nong Bua Lamphu is located in the heart of the Khorat Plateau.

During the existence of the Laotian kingdom of Lan Xang, Nong Bua Lam Phu was traditionally given to rule to the crown prince. In 1827 Chao Anou of Vientiane designated Phagna Narin to be the governor of this place, which is famous as the spot where the Naresuan, the King-Liberator of Siam, came in the sixteenth century to learn the outcome of a war between the Lao and Burmese in the Vientiane area. Nong Bua Lam Phu was long a Lao stronghold, and was the birthplace of the principal wife of Chao Siribunyasan, the last independent king of Vientiane.

Under Thai rule, the province originally consisted of five Amphoe (districts) in the province Udon Thani. In 1993 Udon province was decentralized and a separate province of Nong Bua Lamphu was created. It is one of the three youngest provinces of Thailand, together with Amnat Charoen and Sa Kaeo. 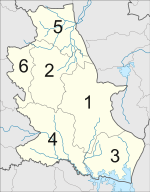 Nong Bua.(หนองบัว) This big pond is right in front of the city hall. As it never dries, the pond with beautiful back drop of Phu Phan Kham Range is used to relax by Nongbua Lampu residents.

Namtok Huay To Botanical Park. (วนอุทยานน้ำตกเฒ่าโต้) This shady park is a popular place for picnic. The secreted shrine of Pu Loop is located nearby.

Shell Fossil Museum. (พิพิธภัณฑ์หอยหิน ๑๕๐ ล้านปี) The museum features fossils of shells from the Jurassic period, dating to 140-150 million years ago. In the nearby area, 60 dinosaur fossils can be seen in the layer of siltstone, above the layer where the fossils of shells and ancient crocodiles are found.

Wat Tham Klong Pen.(วัดถ้ำกลองเพล) This is the province’s famed forest temple. Blanketed with lush vegetable and decorated with rock garden, the temple is shady and peaceful. The main hall (ubosot) houses a statue of Luang Pu Khao and two-sided ancient drum or Klong Pen.

Museum of Luang Pu Lod. (พิพิธภัณฑ์หลวงปู่หลอด) Located in the compound of Wat Tham Klong Pen is the Pmotita Pagoda, which houses a relic of the Lord Buddha sent from Nepal.

None Wat Pa. (โนนวัดป่า) The historical site once was ancient temple as stone Buddha image in the attitude of seating under protection of naga, ancient architecture and antiques from the Khmer era are found.

Phu Khao-Phu Phan Kham National Park. (อุทยานแห่งชาติภูเก้า-ภูพานคำ) The park features two sandstone mountains situated away from each other. It is blanketed by deciduous dipterocarp forest, mixed dipterocarp forest, and dry evergreen forest. The park’s headquarter is located by the reservoir of Ubonrat Dam, close to Phu Khan Kham.

Phu Phan Kham. (ภูพานคำ) The mountain range, which is part of Phu Phan Range, is on the east of Phong River Basin.

Phu Khao (ภูเก้า) is rugged sandstone mountain range in the shape of a pan. It comprises 9 mountains. Home of numerous wildlife, all 9 mountains are blanketed with lush forest.

Wat Phra Buddha Bat Phu Khao. The ancient temple houses two gigantic foot prints, of human and dog, on the rock. In its compound, there are Tham Mum and Tham Archan Sim, the caves which houses pre-historical paintings and carving on the walls.

Tham Sua Tok, Tham Pla Hai, Tham Chek. The caves are interesting archeological sites. They house cave painting and carving which can be dated back to 1,500 years ago.

Ham Tang Stone Pillar. The area is filled up with rocks in different weird shape. The outstanding one is huge rock sitting on the other like mushroom, making it a remarkable natural sculpture.

Tad Fah Waterfall. The small falls cascades through mixed dipterocarp forest before plunging 7 metres down into big pool below.

Tham Erawan. (ถ้ำเอราวัณ) There is a big Buddha Statue at the cave’s entrance which leads to a huge hall naturally decorated with rock formation. This cave is a scene in local legends “Nong Phom Hom’ Or “the lady with fragrant hair”.

Wooden Ubosoth of Wat Chaoreon Songtham. (สิมไม้วัดเจริญทรงธรรม) The wooden chapel or Ubosoth is compact in size and rectangular in shape. The high roof provides good air ventilation. The ubosoth has delicate carving on the roof, and gable with neatly carved garuda.

Phu Pha Ya Archeological Site. (แหล่งโบราณคดีภูผายา) Many pre-historical cave painting are found here. The first group of painting comprise pictures of geometric, animals, hands, in red. The second group comprises pictures of star, man, reptile, draft of big animal. All the pictures were painted in red and scatter in small groups. These paintings are estimated to be 2,000-3,000 years old.

Wat Pa Phufang Santitham. (วัดป่าภูฝางสันติธรรม) The calm and peaceful temple is built beautifully in modern style. There are delicate monasteries and amazing sculpture of nine-headed is built to protect the pavilion.

Calathea Rice container (กระติ้บข้าวจากคล้า) The village of Ban Huak, Tambon Sri Boonruang, Amphoe Sri Boonruang is famous for the rice container weaved from calathea. Some 95% of the villagers thrive on this handicraft which mirrors their wisdom to benefit from natural material.

Tham Erawan Festival. The festivals is held between April 12-15 of each year at Hat None Yao, Amphoe None Sang.