The pear is any of several tree species of genus Pyrus (

/ˈpaɪrəs/) and also the name of the pomaceous fruit of these trees. Several species of pear are valued by humans for their edible fruit, but the fruit of other species is small, hard, and astringent.

The genus Pyrus is classified in subtribe Pyrinae within tribe Pyreae. The apple (Malus domestica), which it resembles in floral structure, is also a member of this subcategory.

The English word “pear” is probably from Common West Germanic pera, probably a loanword of Vulgar Latin pira, the plural of pirum, akin to Greek ἄπιος apios (from Mycenaean ápisos), which is likely of Semitic origin. The place name Perry and Pharisoulopol can indicate the historical presence of pear trees. The term "pyriform" is sometimes used to describe something which is "pear-shaped". 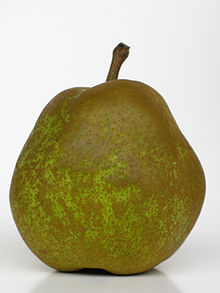 The cultivation of the pear in cool temperate climates extends to the remotest antiquity, and there is evidence of its use as a food since prehistoric times. Many traces of it have been found in the Swiss lake-dwellings. The word “pear”, or its equivalent, occurs in all the Celtic languages, while in Slavonic and other dialects differ in appellations, but still referring to the same thing, are found—a diversity and multiplicity of nomenclature which led Alphonse de Candolle to infer a very ancient cultivation of the tree from the shores of the Caspian to those of the Atlantic.

Pears grow in the sublime orchard of Alcinous, in Odyssey vii: "Therein grow trees, tall and luxuriant, pears and pomegranates and apple-trees with their bright fruit, and sweet figs, and luxuriant olives. Of these the fruit perishes not nor fails in winter or in summer, but lasts throughout the year."

The pear was also cultivated by the Romans, who did not eat them raw[citation needed]: Pliny's Natural History recommended stewing them with honey and noted three dozen varieties. The Roman cookbook attributed to Apicius, De re coquinaria, has a recipe for a spiced, stewed-pear patina, or soufflé.[1]

A certain race of pears, with white down on the under surface of their leaves, is supposed to have originated from P. nivalis, and their fruit is chiefly used in France in the manufacture of perry (see also cider). Other small-fruited pears, distinguished by their early ripening and apple-like fruit, may be referred to P. cordata, a species found wild in western France, and in Devon and Cornwall. Pears have been cultivated in China for approximately 3000 years.

The genus is thought to have originated in present-day western China in the foothills of the Tian Shan, a mountain range of Central Asia, and to have spread to the north and south along mountain chains, evolving into a diverse group of over 20 widely recognized primary species[citation needed]. The enormous number of varieties of the cultivated European pear (Pyrus communis subsp. communis), are without doubt derived from one or two wild subspecies (P. communis subsp. pyraster and P. communis subsp. caucasica), widely distributed throughout Europe, and sometimes forming part of the natural vegetation of the forests. In England, where an ancient pear tree gave its name to[citation needed] Pirio (Perry Barr, a district of Birmingham) in Domesday, the pear is sometimes considered wild; there is always the doubt that it may not really be so, but the produce of some seed of a cultivated tree deposited by birds or otherwise, which has germinated as a wild-form spine-bearing tree. Court accounts of Henry III of England record pears shipped from Rochelle and presented to the King by the Sheriffs of London. The French names of pears grown in English medieval gardens suggests that their reputation, at the least, was French; a favored variety in the accounts was named for Saint Rule or Regul', bishop of Senlis.[2]

Pears are native to coastal and mildly temperate regions of the Old World, from western Europe and north Africa east right across Asia. They are medium-sized trees, reaching 10–17 m tall, often with a tall, narrow crown; a few species are shrubby. The leaves are alternately arranged, simple, 2–12 cm long, glossy green on some species, densely silvery-hairy in some others; leaf shape varies from broad oval to narrow lanceolate. Most pears are deciduous, but one or two species in southeast Asia are evergreen. Most are cold-hardy, withstanding temperatures between −25 °C and −40 °C in winter, except for the evergreen species, which only tolerate temperatures down to about −15 °C. The flowers are white, rarely tinted yellow or pink, 2–4 cm diameter, and have five petals.[3] Like that of the related apple, the pear fruit is a pome, in most wild species 1–4 cm diameter, but in some cultivated forms up to 18 cm long and 8 cm broad; the shape varies in most species from oblate or globose, to the classic pyriform 'pear-shape' of the European pear with an elongated basal portion and a bulbous end.

The fruit is composed of the receptacle or upper end of the flower-stalk (the so-called calyx tube) greatly dilated. Enclosed within its cellular flesh is the true fruit: five cartilaginous carpels, known colloquially as the "core". From the upper rim of the receptacle are given off the five sepals[vague], the five petals, and the very numerous stamens.

The pear is very similar to the apple in cultivation, propagation and pollination. The pear and the apple are also related to the quince.

Pears and apples cannot always be distinguished by the form of the fruit; some pears look very much like some apples. One major difference is that the flesh of pear fruit contains stone cells (also called "grit"). Pear trees and apple trees do have several visible differences. 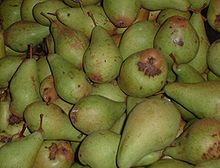 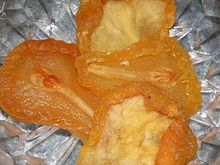 In the wild, some species such as the Iberian pear are dispersed by mammals and some birds.[5]

The pear is frequently raised by sowing the pips (seeds) of ordinary cultivated or of wild kinds, these forming what are known as free or pear stocks, on which the choicer varieties are grafted for increase. Both quince and clonally-produced pear rootstocks are also used for Pyrus communis orchards. For new varieties the flowers can be cross-bred to preserve or combine desirable traits. The fruit of the pear is produced on spurs, which appear on shoots more than one year old.[citation needed]

Other species are used as rootstocks for European and Asian pears and as ornamental trees. The Siberian pear, Pyrus ussuriensis (which produces unpalatable fruit) has been crossed with Pyrus communis to breed hardier pear cultivars. The Bradford pear (Pyrus calleryana 'Bradford') in particular has become widespread in North America, and is used only as an ornamental tree, as well as a blight-resistant rootstock for Pyrus communis fruit orchards. The willow-leafed pear (Pyrus salicifolia) is grown for its attractive, slender, densely silvery-hairy leaves.

Summer and autumn cultivars of Pyrus communis, being climacteric fruits, are gathered before they are fully ripe, while they are still green, but snap off when lifted. In the case of the 'Passe Crassane', long the favored winter pear in France, the crop should is traditionally gathered at three different times: the first a fortnight or more before it is ripe, the second a week or ten days after that, and the third when fully ripe. The first gathering will come into eating last, and thus the season of the fruit may be considerably prolonged.

Nashi pears are allowed to ripen on the tree.

Pear and quince output in 2005

Pears may be stored at room temperature until ripe.[6] Pears are ripe when flesh around stem gives to gentle pressure.[6] Ripe pears are optimally stored refrigerated, uncovered in a single layer, where they have a shelf life of 2 to 3 days.[6] 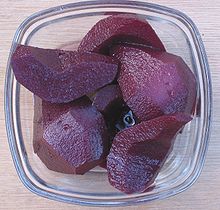 Pears are consumed fresh, canned, as juice, and dried. The juice can also be used in jellies and jams, usually in combination with other fruits or berries. Fermented pear juice is called perry or pear cider.

Pears ripen at room temperature. They will ripen faster if placed next to bananas in a fruit bowl.[7] Refrigeration will slow further ripening. Pear Bureau Northwest offers tips on ripening and judging ripeness: Although the skin on Bartlett pears changes from green to yellow as they ripen, most varieties show little color change as they ripen. Because pears ripen from the inside out, the best way to judge ripeness is to "Check the Neck." To Check the Neck for ripeness, apply gentle thumb pressure to the neck, or stem end of the pear. If it yields to gentle pressure, then the pear is ripe, sweet, and juicy. If it is firm, leave pear at room temperature and Check the Neck daily for ripeness. Source: Pear Bureau Northwest

The culinary or cooking pear is green but dry and hard and only edible after several hours of cooking. Two Dutch cultivars are "Gieser Wildeman" and "Saint Remy". They are traditionally stewed in wine with spices and served both warm and cold.[8]

Pear wood is one of the preferred materials in the manufacture of high-quality woodwind instruments and furniture. It is also used for wood carving, and as a firewood to produce aromatic smoke for smoking meat or tobacco. Pear wood is valued for kitchen spoons, scoops and stirrers, as it does not contaminate food with color, flavor or smell and resists warping and splintering despite repeated soaking and drying cycles. Lincoln describes it as "a fairly tough, very stable wood... (used for) carving... brushbacks, umbrella handles, measuring instruments such as set squares and T-squares... recorders... violin and guitar fingerboards and piano keys... decorative veneering." Pearwood is the favored wood for architect's rulers because it does not warp. It is similar to the wood of its relative, the apple tree, (Pyrus malus [also called Malus domestica]) and used for many of the same purposes.[9]

Pear leaves were smoked in Europe before tobacco was introduced.[10][11]

Pears are a good source of dietary fiber and a good source of vitamin C. Most of the vitamin C, as well as the dietary fiber, is contained within the skin of the fruit.[12] According to the FDA's final rule dated July 25, 2006 "Food Labeling; Guidelines for Voluntary Nutrition Labeling of Raw Fruits, Vegetables, and Fish," the nutritional content of a medium-sized fresh pear weighing 166g/5.9oz is as follows:

Pears are less allergenic than many other fruits, and pear juice is therefore sometimes used as the first juice introduced to infants.[13] However, caution is recommended for all fruit juice consumption by infants, as studies have suggested a link between excessive fruit juice consumption and reduced nutrient intake, as well as a tendency towards obesity.[14] Pears are low in salicylates and benzoates, so are recommended in exclusion diets for allergy sufferers.[15] Along with lamb and rice, pears may form part of the strictest exclusion diet for allergy sufferers[16]

Most of the fiber is insoluble, making pears a good laxative. The gritty fiber content may reduce the number of cancerous colon polyps.

In ancient Greece, pears were used to treat nausea.