Khartoum North (al-Khartūm Bahrī) is a city close to, but distinct from, Khartoum in central Sudan. The city is close to the confluence of the White and Blue Nile on the eastern bank of the Blue Nile. The city, which had in 1993 a rapidly growing population of 900,000, is connected by bridges to Khartoum and Omdurman. It is known also as " Bahrī بحري meaning North in Egyptian Arabic(South is Qibli قبلي ). 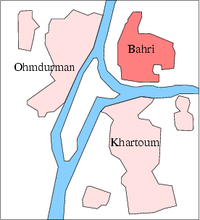 The industrial centre of the region and the country, the city contains dockyards, marine and rail workshops, and sawmills. Khartoum North trades in cotton, grains, fruit, and livestock; industries include tanning, brewing, brickmaking, textile weaving, and food processing. Since the year 2000, chemical plants supplying household products to the rest of the country have been built in the city.

A wealthy suburb is growing towards the eastern part of the city, along the Blue Nile.

Khartoum North has many neighbourhoods, some of which are:

The following bridges cross the Blue Nile and connect Khartoum North to Khartoum: