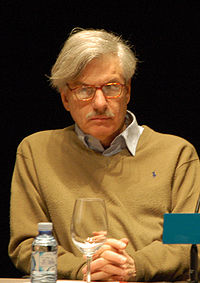 A descendant from Jewish immigrants from Vienna, Löwy grew up in São Paulo, Brazil, becoming a committed socialist at age 16 (1954), when discovering the writings of Rosa Luxemburg. He studied at the University of Sao Paulo, where he had as teachers Fernando Henrique Cardoso, Florestan Fernandes and Antonio Candido); he got his license in Social Sciences in 1960 and lectured sociology for a year at the University of São José do Rio Preto (State of Sao Paulo).

In 1961 he received a scholarship for a doctorate in Paris, France, which he did under the guidance of the well known Marxist philosopher and sociologist of culture Lucien Goldmann, who had a lasting influence on his views. He received his PhD in 1964, with a thesis on “Young Marx’s Theory of Revolution”, at the Sorbonne University.

Soon afterwards Löwy went to Israel where his family had migrated. He learned Hebrew and became lecturer in political philosophy at the University of Tel Aviv, but his political views finished by creating problems, and the University refused to renew his contract in 1968. He was invited -in an act of solidarity- to lecture at the University of Manchester, where he became assistant to the sociologist and founder of the New Left Peter Worsley. (1968-1969).

Presently he is emeritus research director in social sciences at the CNRS and teaches at the EHESS. He is member of the editorial board of the Journals Archives de Sciences Sociales des Religions, Actuel Marx, ContreTemps and Écologie et Politique, as well as a fellow and regular lecturer at the International Institute for Research and Education in Amsterdam.

Until 1985 most of Löwy’s works concerned the sociological and historical study of Marxist thought. This applies not only to his doctorate on Young Marx and his Habilitation on György Lukács, but to most of the essays which he published, some of which were collected in books, as well as for two anthologies, on the National Question (with Georges Haupt and Claudie Weill) and on Marxism in Latin America. Marxist epistemology also takes a central place in his work on sociology of knowledge from 1985.

The methodological orientation of his research was inspired by Lucien Goldmann’s writings -particularly The Hidden God, 1955)- whose approach, associating sociology and history, heterodox Marxism and German sociology, the internal study of cultural works and their connexion to the social structure, served him as starting point.

From the mid 1980’s Löwy will become interested in the Central European Jewish Culture, in Romantic anticapitalism and on the complex interrelations between religion and politics, particularly in Latin America. The concept of elective affinity, borrowed from Max Weber, but re-interpreted, becomes one of the key methodological tools of his research. His latest books concern Walter Benjamin’s Theses on the Philosophy of History (1940), which Löwy considers as one of the most important documents of revolutionary thinking since Marx’s Theses on Feuerbach; and Franz Kafka as an anti-authoritarian author, with Anarchist sympathies, whose novels are inspired by a sort of «religion of liberty».

In spite of the diversity of its thematic contents, most of Michael Löwy writings, since his PhD on Marx till now, belong to a sociology of culture, of Marxist/historicist orientation. Inspired by Lukács and Lucien Goldmann, they also refer to the great tradition of German sociology, from Weber to Karl Mannheim. Their aim is to analyse, interpret and explain the relations between cultural phenomena -particularly religious and political– by situating them in precise social and historical contexts.

Löwy is linked to the Revolutionary Marxist current in France, and one of his last books, on Che Guevara, was written in collaboration with Olivier Besancenot, presidential candidate of the LCR (French Revolutionary Communist League), linked to the Fourth International. He is member of the association ATTAC, of the Copernicus Foundation and of Espaces Marx. He has kept intense political contacts in Brazil.

During several years he cooperated with the left currents of the PT, the Brazilian Workers Party, but during the last years his main contact has been with the MST, the Brazilian Landless Workers Movement, to whom he gave the money of the prize “Sergio Buarque de Hollanda” which he received in 2000 for his book The war of Gods.

Löwy took part since the beginning at the World Social Forum, where he presented several papers, one of which in collaboration with the Brazilian Liberation Theologian Frei Betto. More recently, Löwy joined the struggle for ecosocialism; co-author, with Joel Kovel, of the International Ecosocialist Manifesto, he was also one of the organizers of the First Ecosocialist International Meeting in Paris (2007).

Interested since his youth by Surrealism -he had met the poet Benjamin Péret during a visit in Paris in 1958- Löwy joined the Paris Surrealist Group, by invitation of Vincent Bounoure, its main organizer since 1969. Two of his books are devoted to Surrealism, in its utopian and revolutionary dimension. Next to his Surrealist activities in Paris, Löwy has strong personal links to Surrealists in Chicago, Sao Paulo, Buenos Aires, Madrid, Athens, etc.

(Translated into German and Korean, Séoul).

(Also in Spanish and Portuguese).

(Also in Spanish, Portuguese and French).

(Also in Spanish and Portuguese).

(Also in French, Greek and Portuguese).

(Published in English by Monthly Review Press. Translated into Greek? Soon to appear in Spanish and Portuguese).

057 On the site Agence Global.