The Air I Breathe

The Air I Breathe 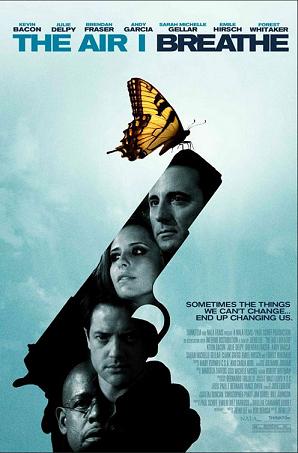 The concept of the film is based on an ancient Chinese proverb that breaks life down into four emotional cornerstones – (Whitaker), (Fraser), Sorrow (Gellar), and (Bacon). The proverb speaks of these emotions, not as isolated fragments of feelings, but as elements that make up the whole of the human existence. Each of the four main protagonists is based on one of the four emotions; and like the proverb their paths are inextricably linked to each other.

Each of the elements of life is portrayed using different characters with (Fingers) playing the character that intertwines all four individuals.

plays a bank employee who loves butterflies. When he accidentally overhears a sure bet at a horse race he decides to bet $50,000, borrowing from the bookies. Unfortunately he loses the bet and gets caught by (Fingers) who runs that gambling/betting pool.

Fingers derives his name from his habit of cutting off the fingers of those who don’t pay back their debts. When Fingers threatens Whitaker that he will cut off his fingers if he doesn’t pay his debt of $50,000, Whitaker decides to rob a bank. After fleeing to a roof the police orders him to drop his gun. He does not comply, throwing his bag with money into the street, and is killed by the police. When he hits the ground his coat is spread out making him look like a butterfly. ;Pleasure

plays a man with a sad past and an ability to foresee the future of the people he meets, an ability that deprives him of the pleasure of enjoying the surprises in life. When he was young, he was forced to defend his younger brother in a street fight against two other teenagers. Fraser won the fight but found his brother lying dead. Fraser often has flashbacks of this scene throughout the movie. Later in his life, Fraser joins Fingers' gang and becomes one of Fingers' favorites due mostly to Fraser's ability to foresee the future of everyone he meets except for one person – Trista (Gellar).

He is set to look after Fingers' nephew, Tony. He has a vision of Tony climbing a fence and falling back. To avoid trouble, he leaves Tony in a club while he continues with his work (collecting protection money). Unfortunately, one of the girls that Tony is with, high on drugs, staggers into the next room. When Tony follows her, they struggle over a gun, and an older mobster gets shot. Pleasure rescues Tony, and they run from the henchmen, ending at the fence of the earlier vision. However Tony crosses without problem, and it is Pleasure who is caught by the henchmen, and beaten up.

plays a famous pop singer and dancer with the stagename "Trista" who works with a manager who is indebted to Fingers. The manager uses all of Trista's money to pay Fingers, but that is not enough, and so he gives Trista's contract to Fingers. Trista escapes from Fingers and meets Pleasure. Fingers, naturally, has already ordered his team to find her. In the meantime, Pleasure helps Trista by letting her stay in his house knowing that his house is the only place where Fingers wouldn't search. They become lovers, but eventually Fingers finds out, and kills Pleasure. She also has KP AB blood type, which she reveals when the interviewer asks her what is special about her. This becomes useful information after Love hears it on the television, at which point he is looking for blood type that is the same as Gina's blood type; when he is trying to save her.

plays a doctor who is in love with his longtime friend Gina (Julie Delpy) but is too afraid to let her know. Gina gets bitten by a poisonous snake and desperately needs a rare form of blood that only Trista has. Trista comes to the hospital after being injured trying to escape from Fingers. After Fingers tells her that she must abort the baby she is carrying, she is about to jump from a roof to commit suicide. Love saves her and she helps him by providing blood for a transfusion.

American critics gave the film mixed reviews. As of , 2008, the review aggregator reported that 14% of critics gave the film positive reviews, based on 21 reviews. [cite web|url=http://www.rottentomatoes.com/m/the_air_i_breahe/ |title=The Air I Breathe – Movie Reviews, Trailers, Pictures – Rotten Tomatoes |accessdate=2008-02-13 |publisher=] . reported the film had an average score of 37 out of 100, based on 9 reviews. [cite web|url=http://www.metacritic.com/film/titles/airibreathe |title=Air I Breathe, The (2008): Reviews |accessdate=2008-01-28 |publisher=] However, Sarah Michelle Gellar was praised for her role in the film.

The movie was released on and on May 27, 2008 in the US and includes a commentary, featurette, trailer and deleted scenes. The film was released on DVD in the UK on Monday 15th September 2008.